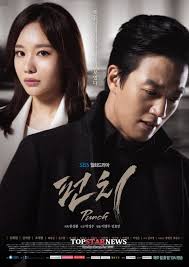 A crooked prosecutor learns he has six months to live. He decides that when he dies, he’s doing it with a clean conscience: the corruption he helped wrought, he shall spend his last days bringing down. This is Punch.

Punch, SBS‘s latest Monday-Tuesday drama, is very aptly named. It goes for the gut, every time, making sure every tragedy, both personal and professional, rings true for the audience. The show makes the great choice of not starting in the obvious place. Park Jung-hwan (Kim Rae-won) is a prosecutor in Seoul, a corrupt one at that. And we get to see just how corrupt he is as he buries evidence of bad auto parts leading to a bus crash, simply because his boss’s brother would be on the hook. Not bad enough? The passengers were children, including his own daughter.

That’s the driving force of the first pair of episodes. He doesn’t learn he’s ill until the second, and at this point, has yet to begin his crusade. By making sure the audience sees how Jung-hwan operates under normal circumstances, it will allow his transformation to be that much more powerful. It’s one thing to be told a hero used to be a bad guy. It’s another to see it in glorious technicolor. Yet, for all of his awful actions, Punch manages to set up a quite interesting conflict between its two leads that relies solely on character.

One the one hand, there’s Jung-hwan, who is openly corrupt. He is a sleazy piece of crap who will throw anyone under the bus if it suits them. That said, he’s not an unlikable guy. He’s not power-hungry or greedy. Rather, Jung-hwan is corrupt because he works for a man who is corrupt. Lee Tae-joon is more than just a boss, though. These men are friends, willing to bite the bullet and risk themselves if it means protecting each other. For Jung-hwan, corruption is the cost of doing business. It’s his job, and he will do it to the best of his ability. 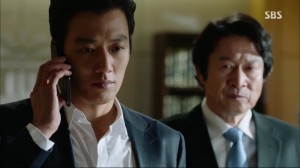 There’s also his family. He loves his mother and his sister, Hyun-sun. His daughter, Ye-rin, is clearly his world. He lights up around them, showing us that he does have a heart. And Jung-hwan will do anything for any of them, especially Ye-rin. He wants his daughter to be spared the work he had to do, feeling she should be able to go through life on a flower covered palanquin. If he has to do some sleazy favors for that happen, oh, well. Jung-hwan never pretends to be anything but what he is. He may be crooked, but he doesn’t lie about it either.

On the other hand, we have his ex-wife, Shin Ha-kyung (Kim Ah-joong). She is his foil, his opposite. His strengths are her weaknesses. As such, she’s very moral, all about doing the right thing and serving justice. You’d think she’d be more likable than her scumbag ex, but you’d be wrong. Jung-hwan is openly corrupt always. Ha-kyung is righteous and honest … when it suits her. In short, Ha-kyung is a massive hypocrite.

I’m not going to lie. I hate Ha-kyung right now. Hypocrisy is the fastest way onto my shit list, guaranteed, and she has a one-way ticket to the top. In the case she’s investigating, Jung-hwan is able to get her suspended for failing to disclose that the bus driver took medication that could impair his driving. When her ex buries evidence, he’s scum. When she does it, she’s protecting a good man’s name. Yes, the medication was irrelevant, and the crash was caused by mechanical issues, but that doesn’t matter. Ha-kyung knowingly excluded relevant information from a criminal investigation. Her cause being more noble than Jung-hwan’s doesn’t change that. 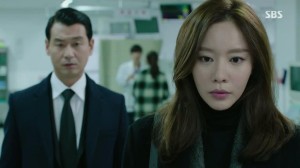 There’s also the issue of custody. Ha-kyung has, at minimum, primary custody of their daughter. More likely, she has sole custody, considering that Jung-hwan had no scheduled visitation for at least a month. But when he files for sole custody, he’s being petty, using their daughter as a bargaining chip. It’s hard to feel sympathy when she says she has a right to raise her daughter when she’s been denying her ex, who, for all his faults, is a good father, that same opportunity. Ha-kyung just exudes the feeling of being holier-than-thou, and it leaves a bad taste in my mouth.

The two sides boil down to people who are honestly dishonest against those that claim the moral high ground but may not have the right to either. What matters more: actions taken or ends achieved? Is it better to openly serve yourself than to do it in secret, claiming to be acting for others? This is where Punch  has decided to rest its conflict in terms of character, and I look forward to more.