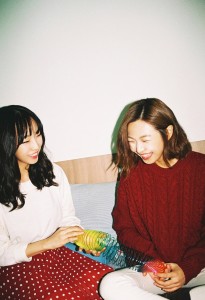 Welcome back, Indie Gem-ers! This week we are featuring Sweden Laundry (스웨덴세탁소). No, not the K-drama of the same name, but a band who has been steadily rising in popularity, and who is responsible for some of the most relaxing, beautiful music I have heard in a while.

If you are a regular Indie Gem reader, you probably know that my recommendations often fall in the punk/rock/electronic genres. So imagine my surprise when I fell head-over-heels for this duo whose music pretty much defines the K-indie “coffee shop” genre: romantic, dulcet tones, mainly mid-tempo, and a vocalist with a whimsical soprano range. However, whether chilling in a coffee shop on a winter’s day, or strolling through a park in spring, Sweden Laundry’s music fits every season and nearly every mood (except guitar-smashing moods). Plus, their music is just beautiful.

The band consists of Wang Se-yoon on the guitar and backup vocals, and main vocalist Choi In-young on the keyboard. They chose “laundry” (or “laundromat”) as their name to symbolize how their music would cleanse listeners, and added “Sweden” because of its romantic connotations in their minds.

Though the band debuted in 2010, they did not release a full mini-album until 2012 with From. Paris. Overall, From. Paris’s sound is light and upbeat, which is illustrated immediately by its first track “입맛이 없어요.”

The guitar creates a fun, beach-like vibe, accented later on by the shaker. In-young’s melodica is a surprise that somehow manages to make the song sound sophisticated and not like an elementary school recital. It is impressive how full the song sounds with such little instrumentation, and even more so how the two play with rhythm between the guitar and melodica around the 2:00 mark. The recorded song has a bit more distortion in the guitar to add texture, but it is fun to watch the above video to see how they use the instruments. Keep an ear out for more subtle, surprising moments like these; Sweden Laundry is full of them.

The title song “From Paris” is more relaxed in feel, ready to spirit the listener away with In-young’s breathy voice.

Though the steady guitar drives the song, the vocals take the spotlight. In-young’s voice is open and sweet, while Se-yoon adds lovely layering when In-young’s high notes start. In performance, it is clear how well the two work together, playing off each other with ease. For another example of this, and a more emotional tune, check out “우리가 있던 시간” (“The Times We Had”).

Sweden Laundry would not release another album until this year, but in-between they released many singles and featured on other artists’ tracks. One of these singles is “흩어진다” (“Scattered”) with Letter Flow, who would also feature on their 2014 album.

Slower and sadder, yet extremely beautiful, “흩어진다” evokes a lost love. In-young’s voice and Letter Flow’s blend almost seamlessly, as he kicks up into his falsetto for the chorus:

Like a fool, my heart can’t even be the way it wants to be
Deeply engraved by the thought of you, it keeps on shaking me
Everyday is empty, those times that I can’t handle
Our relationship is scattering

In November 2014, Sweden Laundry released their second mini-album, 소간 (The Moment). The tracks are a bit more melancholic and slower than From. Paris, with more experimentation with composition and a fuller instrumentation. Though it does not feel as cheerful, the album is thoughtful and shows definite growth in sound for the duo.

The album starts off with “The Moment,” which initially sounds like a ballad we might expect from the band: sparse piano layered with In-young’s breathy voice. However, partway through we get these distortions that sound other-worldly, which blend with In-young’s high notes later on. The song then stops, sounding like it is over, but then it really finishes with about 35 seconds of piano. All of this says that 소간 will not be full of predictable, neat little songs, but thought-provoking melodies and subtle layers of instrumentation. (Also similar is track six, “꿈에 입장.”)

The album is not all gloomy and atmospheric, however, and “Why Are You So Cute?” picks back up rhythms reminiscent of “입맛이 없어요.”

A simple, light song with basically only the chorus for lyrics, “Why Are You So Cute?” acts as a palette cleanser for the two ballads surrounding it.

Both albums are worth a listen for their clever compositions and emotional songs, and Sweden Laundry is definitely a band to keep an eye on. Lastly, for those of you celebrating a certain holiday around this time, here is Sweden Laundry’s “Just Christmas.”