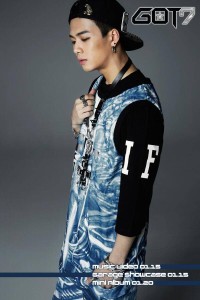 A prominent member of one of this year’s best rookie groups, Got7, Jackson recently received the award for Best Male Rookie at the SBS Entertainment Awards. Having debuted in January this year, Jackson has made rapid strides in the industry and cementing his image in the public consciousness.

Jackson began his ‘thank you’ speech by exclaiming “Oh my God!”, having the audience laughing at his distinctive quirkiness right from the beginning. In addition to the award, Jackson also received a crown with his last name ‘Wang’ embellished on it — seeing as ‘Wang’ means ‘King’ in Mandarin, it pays homage to his Hong Kong background. Upon receiving the award, Jackson also hinted that he hopes for more parts in Got7’s songs.

A lot of Jackson’s success can be attributed to his presence on the popular variety show Roommate. The show allowed Jackson to flaunt his infectious charm, and to share sweet relationships with fellow cast-members like comedian Lee Guk-joo and KARA member Heo Young-ji.

Beyond variety show appearances, Jackson has also made sure that he is memorable with his trademark tricks in his group’s choreography, as well as his participation in the hilarious group Big Byung.

Jackson has made his mark on the industry this year thanks to his quirky and outspoken personality, nabbing this prestigious award. With this title attached to his name, we can expect great things from Mr. Wang in 2015!