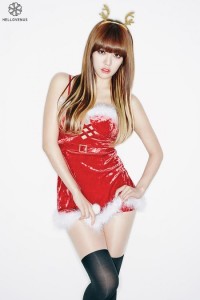 Hello Venus has released a teaser for their surprise comeback “Wiggle Wiggle”. Despite having just wrapped up promotions for “Sticky Sticky” last month, the girl group will reportedly release “Wiggle Wiggle” as a digital single sometime in January.

Hello Venus’s company Fantagio Entertainment has stated that “Wiggle Wiggle” was intended to serve as a follow-up for “Sticky Sticky”, having actually been scheduled for release in November. In keeping with the group’s recent sexy marketing, the music video teaser received a 19+ rating. Both the teaser video and photos were released on December 24, and while “Wiggle Wiggle” is not exactly a Christmas carol, the teaser images capitalize on the coinciding holiday cheer to showcase the members in sexy Santa gear.

However, Hello Venus is hardly the first group to market a more mature take on the holidays. BtoB recently received a broadcast ban from MBC for their song “Cheers!”. Part of the group’s winter single album The Winter’s Tale, the song — penned and produced by the members — was deemed inappropriate for promoting excessive drinking with lyrics such as “This station is Puke Station, this party is the end / People who haven’t said goodbye want to say hello to the floor.”

However you celebrate the holidays, what are your thoughts on Hello Venus’s comeback? And what’s with the double word son titles?