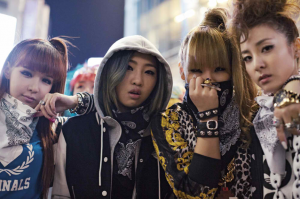 Girl groups often come under fire for not having varied concepts — either relying on infantile cuteness or over-the-top sexuality. In light of this, fresh concepts that flaunt bad-ass feminism and girl power are welcomed by all as a refreshing alternative to the usual girl group formulas.

We recently saw CL sporting an impressive toy gun collection in “Dirty Vibe,” and although this isn’t hugely violent in and of itself, it brings back thoughts of the more violent girl power concepts we have seen in the past.

Black leather, wild hair and bold lyrics are the trademarks of such videos, inspiring a riotous spirit in their fans. At first glance, it’s remarkably refreshing to see this burst of girl power, but often this expression of feminism is accompanied with violent iconography and troubling story lines. Similar to manufactured girl power, where men are the ones behind the scenes orchestrating the images of female empowerment, violent girl power is another instance of feminism with troubling connotations. 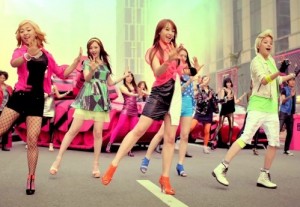 Where the waters get murky, however, is when the violence is directed at specific people, and is tied in with revenge. This is a theme that appears again and again in K-pop videos, resulting in violent vindication for the wronged female. Generally, this takes the form of female characters fighting back against abusive boyfriends, which is a refreshing alternative to the docile, helpless women that are usually represented in the media. However, despite the fact that this is meant to be empowering, it actually only serves to normalize behavior and desensitizes viewers to a very serious topic. Looking at videos with such violent themes begs the question: can independence really come through the barrel of a gun?

Brown Eyed Girls, for example, are known for their edgy take on things — with their huge hit “Abracadabra” pushing the boundaries and ending with the electrocution death of an abusive and two-timing boyfriend.

It is not clear exactly what the boyfriend has done to deserve this, although we see him acting roughly with member Ga-in. The lyrics demand “Do you love her, do you love me?” suggesting that the boyfriend is cheating on one of the members. Whatever he has done wrong, it apparently warrants a painful death, where he is handcuffed to a bed and electrocuted by a device strapped to his chest. The end of the video sees two of the members almost kiss, perhaps hinting that the boyfriend was dispatched in order for these two to be together, which isn’t the best way of resolving a love triangle.

DalShabet‘s “Hit U” takes revenge to a whole new level, as member Jiyul does not just enact revenge on her abusive boyfriend, but shoots down a string of male collateral damage who seem to have nothing to do with the situation.

Granted, the blood splatters we see in the MV are pink, in an attempt to tone down the video. Apart from that, however, the violence is shockingly real, and it can be argued that the pink blood only serves to desensitize the audience further. Jiyul comes prepared with enough bullets in her gun to take down more people than just her boyfriend if needed, which is exactly what she ends up doing. Is this an attack on all men, or is it simply that the lives of others do not matter to the determined woman on her way to kill her boyfriend?

In Miss A‘s “Good-bye Baby,” the man in question faces an agonizingly slow death by drowning, as the members dance around him. At the end, an explosion goes off for good measure and, for some reason, we see the man smile at the end as he lies on the floor exhausted from his ordeal. In this scenario, it seems that the boyfriend is deceptive, but certainly not abusive like the previous examples.

Song Ji-eun and Bang Yongguk‘s “Going Crazy” is another uber-violent example of revenge, which builds up an ominous atmosphere til the ending.

The actress in question drives along casually, with the viewer only realizing at the end that she has her boyfriend, played by BAP‘s Himchan, tied up in the back. Yongguk seems to represent the abusive boyfriend, with his aggressive and intense lyrics expressing his obsessive attitude towards his girlfriend. Ji-eun’s words represent the female in the relationship, who is clearly disturbed by her boyfriend’s stalking and wants him to leave her alone.

The actress in the video has a nonchalant demeanor as she drives out in the desert, not seeming too fussed about the fact that she’s about to take a life. The actress arrives at her destination, giving her boyfriend a chaste kiss on the lips before setting him alight. Like the boyfriend, Yongguk is also seen blindfolded and with his hands tied up. We apparently don’t need to know these men’s identities or histories, adding a disturbing layer of dehumanization onto the story.

Finally, After School‘s “Flashback” sees a man tied up and blindfolded again, with the girls tormenting him until the very end.

The lyrics proclaim, “boy I miss you,” which seems strange since the boy in question ends up being shot — with the members triumphantly strutting out afterwards. Some of the lyrics actually seem quite loving, with the members singing about their hearts racing thanks to the man they are in love with. He seems to have betrayed them somehow, but it is not clear exactly how, making his death at the end even more confusing. 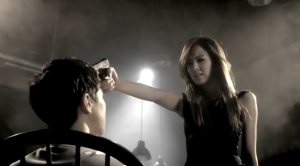 In all the girl group videos above, all the members come together to take care of the cheating or abusive boyfriend, implicating even more people in the crime. Of course, boy bands also make use of violent concepts, with prime examples being BAP, Block B and BTS. In these cases, however, it’s often linked in with glamorous depictions of organised crime or political expression, instead of revenge against an individual.

Additionally, the fact that these videos are still framed around men means that they are not as empowering as you are led to believe. Although it is not as submissive as all the naive lyrics about a man’s gaze making your heart tremble, it still demonstrates a dependence on men, as apparently having a man leave you is enough of an emotional trauma to send you into a murderous rage.

Female empowerment is rare to find in K-pop, so on the one hand videos like the ones above can be praised for being different and rebellious. Although more needs to be done all around the world to stop domestic violence, being violent towards the perpetrators cannot achieve this. Promoting a cycle of violence is not a healthy depiction of feminism, and concepts such as these need to be viewed with a grain of salt.