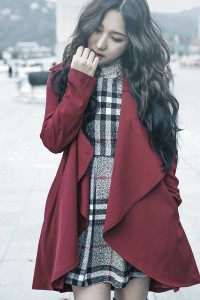 Although the future of Kiss&Cry is up in the air, that doesn’t mean we won’t be treated to their wonderful voices. Member Dia has made her solo comeback with “Paradise,” and her vocals are definitely paradise.

The song has that quality that would fit in well with an OST for a drama or movie. It’s subtle, yet powerful. There’s no denying that Dia can sing beautifully, but “Paradise” stands out. Perhaps this is due to the great choice of instrumentation.

The song opens with a simple piano and only ends up adding some orchestral instruments. The percussion seems limited to a bass drum and tympani, and the only other instruments are strings. Surprisingly, or rather enjoyably, outside the heavy bass drum, the instrument is so muted and soft; it almost disappears behind Dia’s voice. The addition of the backing vocal harmonies is what fills out the sound of the song.

Lyrically, “Paradise” is equating one’s journey through life to that of a road to paradise. As the road is dark and uncertain, Dia doesn’t know what the future will hold. However, she gains courage and excitedly takes that road. Not even the endless fog can stop her. She is driven by her dreams and desires (or hope, if you will).

The MVs come in two different forms: Hope and Dream.  They take this idea of blindly progressing in hope for a better day and put it in a visual form.

The Hope version of the MV — which I personally prefer — is sure to tug at some heartstrings. In the opening sequence we see a couple of symbols of not-so-nice moments, the stopped music box and the darkening of the sky with clouds. Following shots of Dia, the subtle storyline is introduced.

Different characters show moments in their lives where they are struggling: the frustrated dancer and photographer, the lonely girl, the couple breaking up. As Dia moves into the scenes, the people begin to follow her, as if they are following a beacon. A beacon of hope.

In the final scene, all the fraught characters gather in front of the photographer and start smiling. It’s this scene that probably gives the MV its version name. Despite how bad things appeared for everyone, suddenly, they found something to make them smile. That’s what having hope is about: believing in the good when crap hits the fan.

The Dream version, directed by Lim Ji-hyun, is a black-and-white MV with a more subtle symbolism of hope. Dia is sometimes shot in front of a blank screen with various projected images, but that’s not the important parts. First, there is the child in a tree. The child is blind, yet still manages to play her violin and smile. The little girl won’t let her lack of vision stop her.

Second, there are the other scenes of Dia. She’s running down a dark road, looking over her shoulder like something is chasing her. She also stops at moments to look around trepidly. Importantly, there is a road sign that states the area is a sort-of “no dream zone.” Dia appears to be lost on this road to a place where dreams aren’t possible. In other words, her road lacks hope.

Suddenly she’s off the road and in the light. As she falls to the ground with her arms open, you get the sense that Dia is letting go of all the darkness. 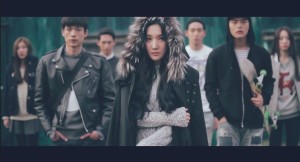 Throughout both MVs, people are having a tough time or facing a tribulation. Yet, in the end, they find a reason to smile and keep going. This is what “Paradise” is about.

I would be remiss to not point out how “Paradise” could be viewed as an affirmation for Dia. Right now, her group status is basically in limbo, as Winning Insight M has said the group hasn’t officially disbanded. However, she still has her status as a soloist. So, despite all the uncertainty, Dia will keep pressing forward with hope that things will be okay.

“Paradise” is a beautiful track, with two great MVs, that give light to those who may be having a tough time with things. With the emotional lyrics, powerful vocals and expertly chosen music, “Paradise” is a wonderful solo comeback for Dia. 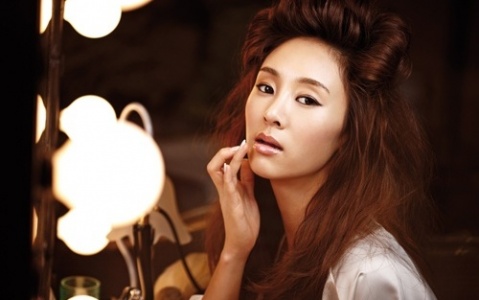