The robust voices of 2Bic make a comeback after seven months of silence with their second EP this year, Genuine. The group isn’t as well-known as their idol peers and they don’t have the history (or evolutionary lineup) of their 4Men contemporaries. However, 2Bic remains a group apart, a vocal duo that has the chops to tackle some of the more challenging and powerful aspects of pop, soul, and R&B.

From the start, we understand that Genuine is going to be a classic ballad mini — single “If We Love Again” leaves very little to the imagination as far as composition goes. It’s your classic K-drama love theme, staying strict to the OST-style balladry most know. The use of grand instrumentation — namely heavy strings and dramatic drum pulses — doesn’t seem to add anything to the largeness of the vocal, instead seeming to be a distraction more than anything else. Jihwan and Junhyung obviously have talent to match the composition, but at some points in the song, particularly during the chorus and climax, one tends to overpower the other in some way.

“If We Love Again” is the typical song of longing and regret, a look back at the love one had and how it was lost — “I’m thinking of you more today. I thought I forgot you now. I was immature back then. So I didn’t know it was love.”

As is part in parcel with most love-lost songs, our protagonist illustrates his apparent reformation as a man; he’s identified, acknowledged, and dealt with his mistakes and is now ready to give love another try — “Now I can finally love you. Now I can finally understand you. Even when I heard about you sometimes, there were many nights I couldn’t sleep. It would be good if we could love again.”

However, as we all know, dramas aren’t limited to their love themes. There are also the cutesy songs that highlight a bit of fun, fluff, or the quirky qualities of the relationship between the main and second leads. Per the construction of K-drama OSTs, Genuine seems to follow the same pattern. Track “Marry You” starts with a simple and elegant string introduction, then goes right into the easygoing, cute drama theme song.

The composition here is softer, allowing both the music and voices to blend much better. Neither seems to be fighting for attention, instead both complementing each other and giving the audience a serene and relaxed listening experience. Lyrically, it’s your standard declaration of love, a song that expresses our protagonist’s desire to forever bind himself to the woman he loves — “Nothing better than you. Just wanna marry you.”

“The Day We First Kissed” is an emotional love song that matches the tone and quality of Jihwan and Junhyung’s voices much better than any other song on the mini. It’s simply constructed, a sparse drum beat, an acoustic guitar, and the perfect harmonization of the group itself. There’s a subtly sensual tone to the song, especially when it hits its climax after the bridge, Jihwan expressing with tender vocals — “I wanna kiss you. I wanna love you. I wanna kiss you. I wanna make you my wife.”

Much in the same lyrical vein of the songs that came before it, “I Love Her” is an expression of wanting to be forever in the presence of the one you call “lover.” This is that part of the drama where the romantic leads find out that they’re perfect for each other despite their differences. There’s a playfulness to the composition, very much reminiscent of one of those silly date scenes between our female and male leads. 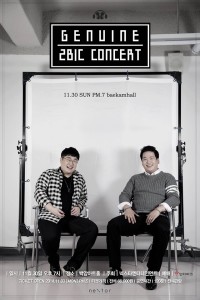 The song compositions for Genuine don’t quite live up to the sincerity of the vocals. Each song can easily find its way on a K-drama soundtrack, and unfortunately, this makes for a very uninspired album. It’s not a matter of if the voices can compete with the dramatic strings and drums. There’s no question 2Bic have the chops to make any song they sing that much more impactful — the vocals are there, as they’ve always been.

However, given the breadth and strength of both Jihwan and Junhyung’s voices, fans most likely expect music with a bit more depth and variety than Genuine offers, something that allows them to immerse themselves in the fullness of the group’s vocal performance.

Genuine is most certainly not a low-quality album. It’s simply an album that will easily fade to the background amidst all the OSTs and their more popular vocal group peers doing the very same thing. Hopefully when 2Bic decides to give us another full-length album, they’ll have taken the time to give us a bit more diversity in terms of composition and deliver a rock-solid album that stands on the back of their genuinely outstanding vocals.