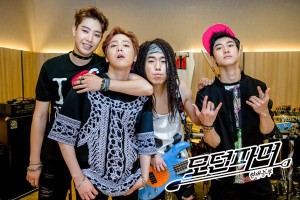 So begins Modern Farmer, a quirky, laugh-out-loud comedy perfect for a chilly fall evening in. The series follows the four members of Excellent Souls who are trying to reclaim their rock band glory days. Lead singer Lee Min-ki (Lee Hong-ki, FT Island, You’re Beautiful) finds himself struggling to make it big alone. He’s in serious debt to a loan shark and has to make money fast. Luckily for him he inherits a piece of farmland, and the price of cabbage is about to sky rocket. He talks to the other members of the band, Yoo Han-chul (Lee Shi-un, Reply 1997) and Han Ki-joon (Kwak Dong-yeon), and convinces them that they should join him on the farm, make fast money, and release an album. Min-ki reluctantly allows the fourth member Kang Hyuk (Park Min-woo, Roommate, Flower Boy Ramen Shop) to come; Min-ki knows he needs Hyuk’s help even though the band’s debut was ruined because of him. The fact that they are Seoul boys with no farming experience doesn’t faze them. They find themselves in the close-knit village of Hadoorokri, full of interesting characters including the fiery village foreman Kang Yoon-hee (Lee Ha-nui, Pasta). 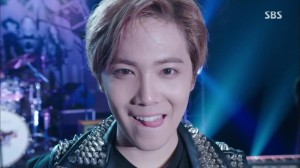 The saying goes “it takes a village to raise a child,” and Min-ki in more ways than one is that child. Although not mean-spirited, Min-ki is rather selfish and manipulative. He only helps others if it helps himself, and he doesn’t take responsibility for the trouble he causes. His former success as a lead singer with crowds cheering him on has made him arrogant, and like a child he often speaks before he thinks. But the viewer can still sympathize with Min-ki because at his core he’s not a bad person, just a little spoiled (it also helps that Lee Hong-ki’s acting is so incredibly funny).

The village itself is an example of what Korea as a whole could be, and takes on a life of its own. Although rural Korea is often stereotyped as backwards, Hadoorokri is far more progressive than “modern” places like Seoul. Bool-ja, an illegal North Korean refugee, is accepted and protected in a country where North Korean refugees are usually ostracized. The beautiful, polite, and innocent-looking Lee Soo-yeon (Kwon Min-ah) finds that her looks and aegyo do little to win over the village (in fact, it’s only the city boy Han-chul who is swept head over heels). But the most surprising character is village foreman Yoon-hee who uses her own inner strength to lead the village. She’s kind but tough when she needs to be. In addition, the village respects and accepts her despite being an unwed single mother; it’s Min-ki who expresses surprise and horror about her situation. The series does a good job of neither demonizing Yoon-hee nor painting her as helpless. Her single-motherhood is a part of her, but it doesn’t define her. 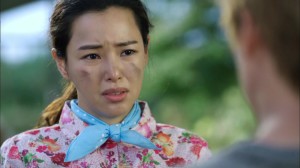 Although Hadoorokri is not perfect, it’s only when we leave the village that we see real corruption and “bad” people. Partly this is because unlike the village, the towns and cities are so large that people don’t depend on each other or even need to know each other; everyone is replaceable. So people feel more comfortable judging others, taking advantage of others, or being influenced by a pretty face. When Min-ki and his friends visit the nearest town, they come across immigrant workers protesting their boss who won’t pay them. There’s also a man in the town that refuses to feed a runt simply because dog food is expensive. The beautiful but money hungry Lee Soo-yeon comes from a room salon in the city. The goodness in Hadoorokri is powerful enough to even change the childish Min-ki. By the end of episode four we see the first signs of maturity, empathy, and selflessness. Whether he likes to admit it or not, Min-ki is truly becoming part of a group for the first time, not just being the flashy lead singer. 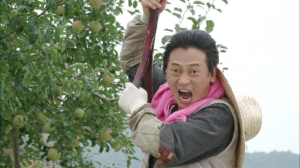 What is really refreshing about the series is what it doesn’t do. The series doesn’t focus on city boys trying to be farmers; after all, there are only so many ways to make bumbling in a field funny. There are interesting sub-plots and unexpected twists and turns along the way. The series also doesn’t fall into the trap of making the villagers into one-dimensional country bumpkins or peaceful, idyllic farmers; these villagers have quirky personalities, but there is something very realistic about them. The secondary characters are wonderfully memorable and engaging. Oftentimes secondary characters only show up when it’s convenient and then drop off the face of the earth; such as the “best friend” who’s only purpose is to talk about the love interest and then leave. But the colorful cast in Modern Farmer is always present. Rather than being mere tools to advance the plot or to introduce pointless plot twists, they stay a part of the story. As Min-ki and his friends get to know the villagers and become a part of the village, so do the viewers. 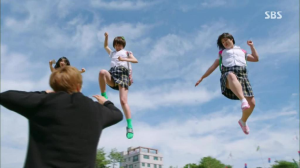 Finally, something has to be said about how the series is filmed because of how unique it is. There are the usual sound effects, body gags, and animations you see in other shows, but this series uses several original techniques to really amp up the comedic value. Extreme close-ups with the actors looking directly into the camera draw you right into the scene. It’s interesting to see actors only using minute facial expressions to carry a dialogue. The background music takes samples from popular films like Kill Bill to reinforce the tone. The funniest scenes use slow motion and matrix camera techniques that I’ve personally only seen in SM Entertainment music videos (such as SNSD’s “The Boys”). Episode two’s closing scene with the visiting mayor is absolutely priceless.

Modern Farmer is an unexpected and pleasant surprise to watch. The series does a great job of staying away from clichés and is a welcome break from the typical poor-orphan-falls-in-love-with-arrogant-rich-man dramas. So take a chance on Modern Farmer and get ready to laugh!