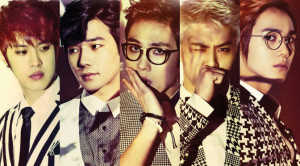 With news of Lee Joon’s decision to leave MBLAQ to further pursue his acting career, followed by subsequent reports that Thunder will be following suit and will also depart from the group on expiration of contract, the future of MBLAQ is currently clouded with uncertainty and possible disbandment rumours that will no doubt be a bitter pill to swallow for fans.

Amidst all of the ambiguity, however, J.Tune Camp has revealed that the boys will be releasing their 7th mini-album Spring, Summer, Autumn, and…Winter on November 25th, which will most likely be their last album together as a complete unit. The album will be a special ballad album, comprised of several songs that have been personally composed by the boys themselves. The unveiled tracklist contains 5 tracks including “Live In The Past”, possible title track “Spring, Summer, Autumn, and…Winter”, “You ain’t know”, “Stop Saying It’ll Be Alright” which features FIESTAR’s Hyemi and finally, “Rust” which will be an unplugged version of the same track from their 2011 album, BLAQ Style. 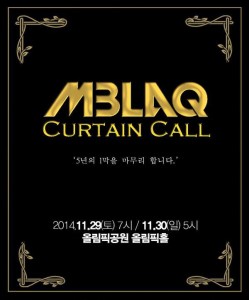 Unfortunately, their management has stated that that this release will not be actively promoted on television or music shows, depraving fans of an opportunity to see them together on stage in their final days. Yet all is not lost as their upcoming concert, Curtain Call, at the Olympic Park in Seoul is still going ahead as planned on November 29th and 30th. All five members are set to perform during the event, but it’s a bittersweet occasion as it seems like it’ll be the final time the members promote together as a quintet.

Furthermore, the future of the other three members, though also undecided as of yet, remains optimistic for the agency as it has been reported that they are set to continue to discuss contract renewals and negotiations with J.Tune Camp after the concert. Whether or not they will continue to promote as MBLAQ as a group of three, if new members will be added or if each will decide to pursue solo activities, is still in doubt. But with the imminent departures of two members, they have definitely received a hard blow and it will certainly be difficult for the team to bounce back.

What do you think lies in the future of MBLAQ?