LEGEND is Delirious in "Lost" 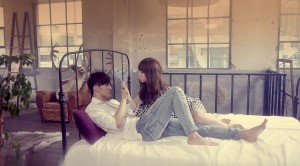 After debuting in July, rookie group LEGEND is back with their new track “Lost.” A sentimental track about love lost, the group expresses how they’ve slipped into a state of deliriousness in their (newly) single status.

LEGEND debuted with “Left Out,” which was about a breakup. “Lost” picks up where their debut left off: the aftermath of a breakup.

“Lost” conveys the mental anguish that accompanies an unwanted breakup. Despite this fantastical image the guy has of his lost love, it can’t stop the darkness of no understanding that creeps into his mind. The guy has fallen down the rabbit hole of despair. This type of song is pretty fitting for the season.

Comparing their debut to their comeback, LEGEND seems to be continuing to emphasize their vocal stylings. Both have been geared more toward the ballad end of the K-pop spectrum – although they aren’t pure ballads. This is a smart move, as the group can find legitimizing ground as a group with talent, and not just another typical K-pop boy group whose name you’ll forget within a week.

There’s not much to complain about the MV, except for the usual terrible lighting and lens flares. The MV for “Lost” also maintains the same concept as their debut “Left Out”: one member is portraying a relationship, which is interspersed with shots of the group and individual members. It’s pretty average by K-pop-land standards.

That’s where the similarities between their debut and comeback end, though. Don’t worry, LEGEND didn’t exactly regurgitate their previous MV and come back with something entirely stale.

First, the fashion has been stepped up. Listen was able to ditch his military band-inspired hat and there is more uniformity in the group’s styling.  Individuality is nice, but having members seem like they’ve stepped off the set of different MVs isn’t as nice. For “Lost,” LEGEND is sporting some snazzy suits. Although not traditional suits – Lito’s is rather odd – they still look sleek and the group wears them well.

Second, the “plot” of the MV is slightly different. First, Lito and the girl is the only depicted relationship. He walks around awash in memories of his lost love. Everything from his guitar to the mirror reminds the man of his ex. He’s slowly sinking into a pit of painful memories – which is exactly what the lyrics are about. The people behind the MV did a good job at truly sticking to the emotions and ideas projected in the song. 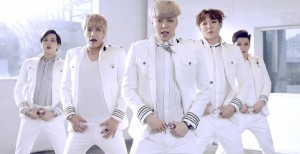 I do wish there were more shots of the dance. It appears to be cool, especially during the chorus. There’s some nice footwork, and even the hip-thrust isn’t completely out of place. Jaehyuk truly stands out, and it’s not because of his blonde hair – he’s actually very exuberant.

Musically, “Lost” is more pop-rock than the traditional pop boy band tune. Although there are some sound effects in the first bar and other various spots of the song, the instrumentation is generally just guitars. We do hear an electronic bass beat and some piano, but that’s usually backing for the guitars. As the song progress, the instrumentation goes from acoustic to electric. This is a nice effect as it builds up the angst and fully embraces the rock element.

Rather than have the rap parts sporadically spread throughout the song, Lito comes in as the bridge. Because of this, the flow of the song doesn’t break up and stays consistent. Additionally, the subtle, almost speech-like style that Lito uses helps keep the sentimental style of the song. This also matches up with the stripped down instrumentation, as only the piano and drums are present. These musical elements make the song all the more enjoyable. 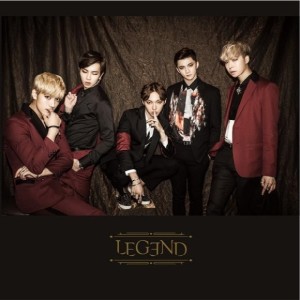 ‘m sure LEGEND will pop out some super k-pop tune eventually, but for now I’m more than thrilled with their direction. They stand out and are an enjoyable listen.  Yes, the MV is a bit unexciting, but as mentioned with their debut, they are from a small company that likely doesn’t have a spectacular budget.  However, to be honest, who else is actually not paying attention to the MV and just listening to the music? “Lost” is a good, quality song.