Hello Venus Ditches the Sweet for the "Sticky Sticky" 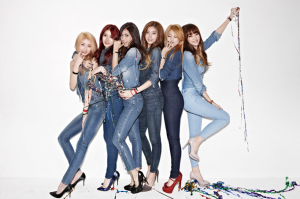 After over a year away, and following the ending of Pledis Entertainment and Fantagio‘s partnership (which included member changes), Hello Venus has made a comeback with “Sticky Sticky.” The group has ditched the sticky sweetness of their previous releases and taken on a sexier concept.

To be fair, this concept isn’t completely out of the blue. “Would You Stay For Tea?” was essentially a track filled with innuendo. “Sticky Sticky” is no different and may be even more direct. They aren’t asking you to stay for tea — they are explicitly asking you to hold them and stay the night. The use of sweet treats to describe their feelings is seemingly innocent, except they are used in connection to “naughty” hands. As for the “make it sticky” lyrics, well, let’s leave that to our respective imaginations.

With bright colors and sweet shop/girl club-house sets, you initially expect some sort of sickenly sweet cuteness. However, the new concept doesn’t hide behind some aegyo-filled awkwardness and instead embraces their womanhood.

This embracing of womanhood is apparent in the MV: Hello Venus is in charge. They tease, play, and control the movements of the man. They each try to gain attention from the man in various ways — offering candy, asking fashion advice, and using different facial and body gestures. On the other hand, the girls correct any of the man’s behavior they deem inappropriate — such as when he tries to open the changing room curtain.

The best part of the MV is the ending. The man got out of line, and he had to go. He is treated to hits, slaps, and finally a farewell as he goes out the door. It appears the girls won’t partake in the game he’s playing – that quintessential K-pop MV plot of having one person try to get an entire group. 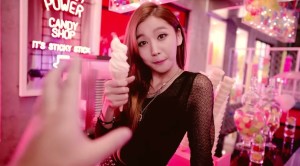 The MV is shot from the point of view of an unknown male. That’s a pretty slick move from the production staff. Think about the comments typically seen under MVs: “I wish I was that guy/girl;” “Oh, he/she is so lucky;” etc. Well, with this POV style, now people can easily imagine themselves in that role. Yes, it’s a bit creepy, but people will do it regardless of how questionable it seems.

The use of the POV method aids in showing the power the group is trying to portray. It essentially is a message to everyone: Act right or get out. The girls will be kind and fun, as long as you treat them appropriately. This is the power that all women should be able to have and use — our bodies and space are our own, and we make the rules.

Could this have been done without the butt-rubbing and drops in the dance? Absolutely. But power doesn’t mean lack of sensuality. Hello Venus is trying to entice and seduce. The dance is pretty standard and as far as sexy dances of this year go, Hello Venus is one of the least sexy of them. It is pretty simple and less in-your-face, but gets the point across.

“Sticky Sticky” isn’t without its sweetness, despite the noted lack of aegyo — the set is a sweet shop after all. Ice cream and candy is everywhere. The girls even sit and dance around what looks like extra-large ice cream cups. You could get a cavity just by looking at the MV. It looks like heaven, to be honest. 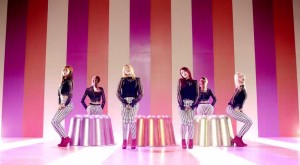 Heaven or not, though, the MV could have a more direct relation to the song — such as showing an actual relationship. But, the viewer gets the point being made, so it’s decent enough.

As for the song, it’s generic Brave Brothers, and therefore unimpressive. Yes, this will get them attention – working with Brave Brothers does that. However, “Sticky Sticky” seems just a half-hearted effort. It seems like something After School released, particularly “First Love” – which is, of course, a Brave Brothers song. Amusingly, this comeback makes Hello Venus appear more like After School’s little sister group than their previous releases while under Pledis.

From the lyrics to the MV, Hello Venus is controlling the situation. This is a step in the right direction. With a little more captivating choreography and a better choice of song, Hello Venus could gain quite a decent footing in the industry. “Sticky Sticky” just isn’t quite enough to make that happen yet.