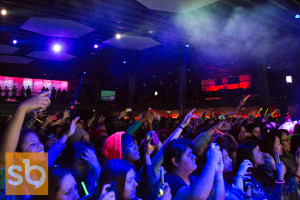 With just over a year passing since its formation, AOMG — Jay Park‘s independent music label — has already made its mark on the Korean music scene; so much so that the label’s roster of artists got together and came over to the U.S. for a short tour, with stops in New York, L.A. and Washington, D.C. Anticipation was definitely high for their appearance.

On November 20, fans at the D.C. stop, which I attended, were undoubtedly enthused. Despite the small turnout for the show — unsurprising since it was a Thursday — the crowd was overflowing with excitement, some members of the audience even arriving the night before.

With tables reserved and drinks ordered, some prepared to enjoy the show from a second floor lounge, while others flooded the front of the stage with glowsticks, posters and plenty of energy. But the best seats might have been for those select few who were allowed to view the show from the stage itself, standing to the side just a few feet away from the artists as they performed. 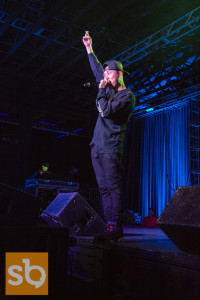 And, boy, did they perform.

Featuring performances by Loco, Gray, Simon D and Jay Park, the night wasn’t really a concert. No, it was more of a party. Loco started the show off with tons of energy, showing the most out of all the performers in fact. He jumped and danced around, threw his arms up, and got the crowd hyped. My personal favorite of his songs was “Hold Me Tight,” particularly because it’s a great mix of dance, R&B and rap: perfect for the night.

Gray joined him for a number of songs before moving onto his own discography, including single “Dangerous” — sans Jay Park, though. With his floppy hat and sunglasses, Gray exuded a cool confidence, and it really showed in his performances. He swaggered around the stage, gestured at individual audience members and never missed a beat. Loco rejoined Gray on stage for a few more songs, including a great performance of B-side track “In My Head,” before the stage cleared for the next performer. 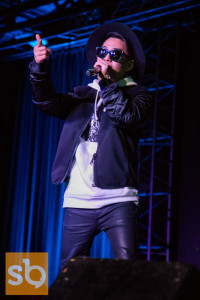 Well established on the Korean hip hop scene, Simon D took the stage in a way that only he could: looking slightly arrogant and relaxed, but still serious about putting on a good show. He said that this night was all about “real Korean rap shit,” and he definitely put on a performance reflective of that. Going from solemn raps to fun party songs (my favorite was definitely “Cheers“), Simon D did a great job keeping the audience totally engaged — though I think what really got everyone was him asking if he would find a girlfriend in the city. Constantly toeing the edge of the stage, he seemed most inclined to reach out to the audience.

But, of course, no one set the venue on fire quite like Jay Park. Undoubtedly due to his massive popularity in the international fandom, he was a good sport on stage. He danced, slick and sharp as usual, all the while crooning and spitting like there was no tomorrow, and this was all despite the fact that he had flown in that morning from China and was likely dealing with the accompanying jet lag. He and his backup dancers definitely had fun in putting on a show, and he did his best to keep the party atmosphere going. 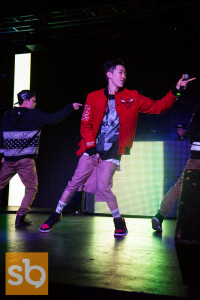 While there was a definite sequence in performances, the show was all about the collaborations. The artists entered and exited regularly for joint performances. Admittedly, collaborations may be standard for other companies as well, but these didn’t feel like cameo appearances to give someone more time in the public eye nor did they appear to be for the sake of variety to make this show something “special.” Rather, the decisions of AOMG seem to be more so fueled by artistic pursuits rather than shameless promotion, as all of them worked seamlessly well together, whether in twos or a team.

Because of this, the collaboration stages were fun and organic. The best duo was definitely Loco and Gray. The two had great chemistry and did an exceptional job getting the audience on their feet, dancing and shouting and cheering. But nothing beat when everyone came together to perform “Metronome” and “Success Crazed” at the end. Altogether, they were obviously invested in their performances and tried their hardest to pull the audience into their enthusiasm despite the language barrier (except, of course, for Jay Park). 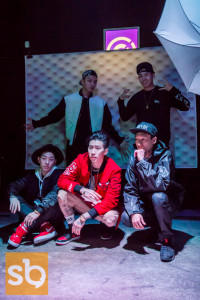 But we can’t forget the heart of the entire show: DJ Pumkin. Tucked away behind his turntables and some screens and lighting, his role was akin to that of a drummer at a rock concert: hidden and stationary behind his tools but nonetheless absolutely essential to the performance. DJ Pumkin’s presence was definitely felt as he had a big hand as moodmaker for the whole night. Really, everyone played a part as this definitely was an AOMG show above all.

At the end of the night, it was sad to see the show draw to a close. The fun, energetic atmosphere could probably have continued on until the next morning. The only thing that would have made me enjoy that show any more than I did would have been a shot of soju. Maybe next time.

Check out some highlights of the show:

Want more pictures from the show? We’ll be posting them to our Tumblr in coming weeks.