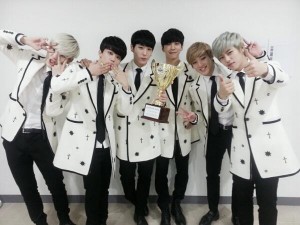 It’s not only SM Entertainment that has slave contracts, as fans were unpleasantly reminded today. It was announced that B.A.P. are suing TS Entertainment over their contracts, joining the ranks of Seungyeon, Nicole, Jiyoung, Block B, JYJ, Hangeng, Kris, and Luhan as idols who have used the law to deal with unfair contracts.

The members’ main problem is that the contract is for seven years following their first album, not the signing date of March 2011. Depending on the definition of “first album” used, this could mean B.A.P. will be held to anywhere from one to three extra years under these contracts. They also allege that their civil rights and rights to privacy have been violated under these contracts. The group also claims issues with pay distribution, suggesting that they’re getting ripped off by TS.

It is unclear at this time if B.A.P. is filing in order to modify their contracts or simply terminate them, but it is clear that this is happening as a group. TS Entertainment has yet to issue a public response.