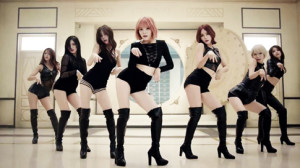 AOA‘s “Like A Cat” MV has gained 1 million views within 24 hours of it being released. Apparently, the comeback this time seems a lot more promising than their previous no-win “Short Hair”. A lot of people will still get ticked off by this MV, however, and it  deserves criticism for all the objectification of women throughout the video.

Thanks to this oh-so-creative concept of cat girls, we hear meowing sounds every once in a while. We see AOA dance like they are scratching someone’s face. The song’s title in Korean — 사뿐사뿐 — which describe a cat’s soft way of walking, definitely refers to a juxtaposition between AOA’s members and the animal as well. Judging from how much fans love this concept, perhaps fantasizing about women as cute but fierce (and flexible) cats still arouse men out there.

The girls also display a lot of butt-related details. Let’s not yet be too frustrated with way too many close-up and low-angle shots that do nothing but to voyeur at AOA’s butts, and focus a little on the dance itself. “Like A Cat” again adopts a revealing and inviting choreography that tends to emphasize the hip.  To be honest, AOA has been using hip-related dance moves consistently ever since “Miniskirt”. They are not the sharpest, but not too bad dancers either.

However, the hip dance in “Like A Cat” is rather stiff and forced, particularly from 1:46 to 1:50. Instead of proudly flaunting their curves, AOA just look as if they are awkwardly and very non-artistically trying to wiggle around their bodies. Now this is a reason why  the filming emphasizes the girls’ body features. If FNC cannot market this product for the girls’ dancing skill, another way to increase the sale is by selling AOA’s “beauty” to the audience instead.

Besides these negative portrayals of women, the music video is still commendable in some aspects. Even though it is no less blatant in 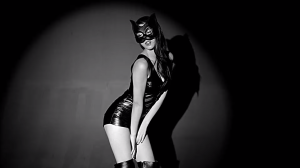 promoting voyeurism, at least this time AOA somewhat admits to the act of soliciting outside gazes instead of putting on another innocent facade. Granted, a cute, lovely, sweet, pure creature and a sexy, mysterious, naughty lady are both men’s fantasies for women. However, men are not the main problem. It has more to do with how a girl accepts her true self. From a fellow female’s perspective, it is disturbing if a sexy girl is judged for being honest about her sexual desire and apperance, and has to tone down or disguise her sexual presence to an “acceptable” level. A girl should have the right to be comfortable with the way she chooses to be if it doesn’t affect anybody else,

In “Short Hair”, the sexual attractiveness is all covered up. The appeal is still there, painfully obvious even, but it is never stated, never conceded. AOA still feigns a veil of cuteness and naiveté as a safe net for all the butt shaking. However, “Like A Cat”, to a certain extent, is more open about its seduction purpose. Both the seductive gaze the girls send out when looking directly at the camera (partly thanks to the smokey make-up), as well as the lyrics, are pretty straightforward in telling us what AOA wants and demands. 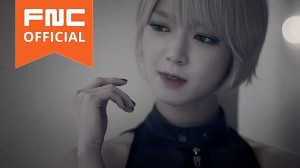 laser tripwire alarm system. Surely that is a terrific show for voyeurism and male gaze all in one, but there is also ChoA‘s presence. She is leaning against the wall, watching appreciatively as Seolhyun sliters pass the laser beams. In addition to a very high possibility that this scene will inspire a number of fanfics later on, I just love how the girls are so comfortable with each other’s and their own sexual appeal. Of course, the director just has to pick that particular laser beams scenario for the sake of exposing and thus exploiting Seolhuyn‘s ‘sexy body‘. 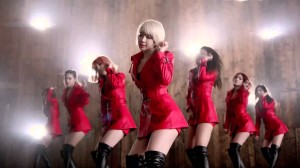 Furthermore, AOA has transformed its portrayal of ‘sexy’. For example, when it comes to the girls’ outfits, thank God they are no longer dancing in those lame waitress’s pink apron-slash-skirt like in “Short Hair”, but gorgeous red leather coats, tight cut-away tank tops, and boots. Also for “Short Hair”, we had the girls worrying about what should they wear, how should they do their make-up, and should they walk out on the street with their current hairstyle. Basically, “Short Hair” was an encouragement for young ladies who lack a bit of self-confidence. That cannot compare with this femme fatale story about alluring burglars in action. A bit of Charlie’s Angels, a bit of Cat Woman, and we have AOA captivating everyone’s mind while trying to steal that big diamond.

I also love how AOA’s burglary is such a miserably-conducted mission. Seriously, this group is such a bad gang of thieves that it is amazing how they still succeed. Mina drops the sleeping-gas can, and she let herself be affected by it right away! Jimin walks in all bad-ass and whips out two guards, only to be chased after immediately afterward by even more. While ChoA tries to break through the final door, Seolhyun is too busy playing games on her phone that she does not even notice that the enemies are in front of them already. The hint of humor is not as evident as I wish it could have been, but thanks to these details, the video is not just full of uptight, serious, and forced acts of trying to be sexy.

Other than that, the music is catchy, though not super melodious. Compared to “Short Hair”, the girls’ vocal ability has not improved much. The high-pitched notes sometimes even sounds a bit too shrilling, but things gets blended out pretty well in the chorus. Daniel Snoeks‘ acting is pretty solid, and some fans have been commenting on how hot he is.The story line is relatively logical with a sensible setting. Though there are a few dubious moments of advertisement for the online game AOA is promoting, I still found the video to be quite enjoyable.