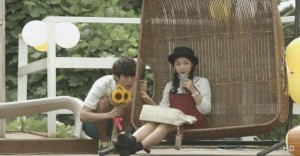 Another week in K-pop, another 5 Things to Love. Amongst the scandals, K-pop debuts, K-variety laughs and K-dramas that tell the tales of second chances at life and love, what were the highlights of the week?

The following are my picks for the top 5 Things that happened in K-pop last week.  If you’re not up-to-date with your K-pop and don’t like spoilers, do not proceed.

The official MV for the song “Crying Out” from the OST for the movie Cart was released last week. The song features Exo‘s D.O. who also had a part in the movie. The sad ballad conveys the plight of the women and their families portrayed in the movie who unfairly lose their jobs after years of service as contract workers and their fight for justice. D.O.’s vocals are perfection in the song.

What, you thought musicians do it all just for the love of music? Tomorrow’s Cantabile and its great cast keep improving every episode, and the slow thaw of Cha Yoo-jin (Joo Won) is just part of the fun. And Park Bo-gum, who plays the plays the master cellist Lee Yoon-hoo — where has he been all my K-drama life?!

Fans of YG Entertainment‘s Team B, who were first introduced through WIN:Who Is Next?, can finally heave a sigh of relief as the team’s latest survival show Mix & Match came to an end with the announcement of the seven final members. It’s been a roller coaster ride for the members of Team B, leader B.I., Jin-hwan, Bobby, Jun-hoe, Yun-hyeong and Dong-hyuk having to persevere through two survival reality shows. Three newbies were thrown into the mix: Hong-seok,  Jin-hyeong, and Chan-woo, who eventually won the seventh spot in iKON. I think that iKON has a bright future ahead of them and am excited to see what their debut will bring.

Last week, the cast of 1N2D visited their alma maters where they were paired up with a group of students from their respective schools to participate in a 1N2D field trip. It’s always a lot of fun when when fans get to participate on their favorite shows and the mix of students which includes musicians, intellectuals, athletes, and dancers are sure to continue to bring the laughs in the upcoming episodes

Misaeng fever is sweeping South Korea as the show continues to connect with the true life of the salary men and women of the country — sometimes brutally so. Director Oh must choose between his conscience and closing the contract when a big opportunity comes via a business man with, uh, specific tastes that need to be satisfied to seal the deal. He and his team go to extremes to first try to get out of doing it and then to close the deal without actually doing … it.  If you haven’t yet tried watching Misaeng, you really should.  It’s not the fantasy rom-com like most popular K-dramas, but its portrayal of the every day trials and victories of its characters will have you rooting for them in every episode.

Those were my top 5 Things that happened in K-pop last week — were they yours?