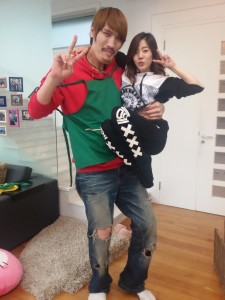 Last week in K-pop lies were proven false, love cells fought for life, winning wasn’t always a win, mistakes were stopped,  it’s always Sunny on Roommate, Kyuhyun sang of Gwanghwamun, and congratulations went out to Boyfriend for their first #1 win since debut with “Witch” on The Show.

The following are my picks for the top 5 Things that happened in K-pop last week. If you’re not up-to-date with your K-pop, beware: spoilers ahead.

Free Style, the old school hip hop duo made up of Zio and Mino, released their latest “One Way” featuring Skull. The song was composed by DJ Zio with Mino penning the lyrics.  It has a smooth groove and Skull’s raspy voice on the chorus blends in perfectly. Those of you not familiar with Free Style, but are avid K-variety watchers might recognize Mino from his recent appearance on 1N2D as Defconn‘s guest on the ‘Exhausted Friends Special‘ and as HaHa‘s friend on the latest episode of Infinite Challenge.

And speaking of 1N2D, it was part two of the episodes in which the 1N2D members were matched up with teams of high school students from their alma maters (or an award winning high school band in the case of Jung Joon-young who studied abroad). The schools played three games to win their dinner, the second of which was a game to test their virtue in Partner Dodgeball. The  guys had to protect their partnered girls (since there were more boys some of the boys wore wigs) and the girls got to choose their partners from the other schools.  I’m sure the game made mini celebs out of three talented and virtuous players from the Young-dong High School — Kim Se-young, Kwon Soon-woo and especially Shin Chae-ha who overcame 3 to 1 odds to win.  K-variety episodes where fans are included are always fun and I actually wish they had showed more of the students’ trip — one more episode would have still been lots of fun.

3. A knife always stabs from behind…

My #1 crime fighting K-drama of the moment would be Bad Guys.  The story remains tight and hard hitting interwoven with past secrets, lies, misdirection and crime busting.  While our trying-to-become-human-again band of crime fighting criminals begin to get to know each other better and trust each other with their lives–we are always left wondering if that trust is actually misgiven.

The cast of Infinite Challenge were given $1000 each to come up with a business plan to  earn as much money as they could within a 24 hour time period.  The purpose of this challenge was to understand the plight of the self-employed and small business owners in tough economic times. Yoo Jae-suk recruits Nam Chang-hee to help him with his plan of buying cabbages straight from the farm and then selling them in Seoul, right before leaving he runs into Jo Se-ho and tries to recruit him too, but… competition is fierce.

Lee Jong-suk and Park Sin-hye‘s new drama Pinocchio debuted last week and if the rest of the drama lives up to its debut — it’s gonna be great. The first two episodes introduced the main characters and their back story.  Choi Dal-po (Lee Jong-suk) leads a mysterious life as Choi In-ha‘s (Park Shin-hye) long lost uncle on one of South Korea’s island villages. In flashback we learn that his name is actually Ki Ha-myung and his family was ruined by rumors, lies and sensationalism spread by the media (especially one rather unscrupulous reporter) and attention seekers after his fire chief father goes missing following a large accident in which several firemen died — leading many to believe his father ran away after causing the incident.  Years later, lies and rumors spread by jealous classmates again threaten to disrupt Dal-po’s life , but now he’s older and wiser and can better deal with the situation through knowledge from his past experience.

There’s a message  in this tale that speaks volumes about South Korea’s problem with bullying, whether it be in schools and the workplace or through the internet.  We’ve all seen it happen, especially to celebrities, and after watching the first two episodes of Pinocchio. I hope everyone took a minute or two to think about whether or not we add fire to the flames of cyber bullying/witch hunts–intentionally or not–when we read, promote, or add to gossip about any of our favorite K-pop celebrities.