In light of how keeping up with GOT7‘s reality shows is becoming something of a full-time occupation for fans, it seemed timely to pick up an old MV we’ve, somehow, missed out amidst the really reasonable number of MVs from groups veteran and green alike.

GOT7’s “A” is a fresh, easy, fairly catchy summer number, replete with adorable fresh-faced boys with (generally) good hair doing summery athletic things like supermarket trolley races, and an ice-cream shop girl (“A) with an awesome judge-y face doing double duty as requisite love interest/object of affections/crushcrushcrush. It’s a track and a video quite representative of GOT7 at present, both in terms of overall image and demonstrated musicality as a group. 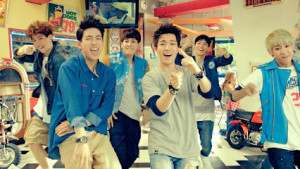 The teenage braggadocio in this MV is endearingly convincing and entirely age-appropriate, the latter of which I think is one of the things JYP is really doing right for GOT7 — letting teenage boys just be teenage boys. On this site we’ve previously talked about GOT7 being this decade’s 2PM, but it seems as though they’re making a concerted effort to move away from their sunbae group image-wise.

2PM’s debut single, “10 out of 10,” has a similar youthful, adorable brashness to it, but their place in the K-Pop pantheon is defined by broody, moody heartbreak — think “Again and Again” and “I Hate You.” GOT7, on the other hand, seems to be quite content to play up this boy-next-door image for all it’s worth, and I for one am quite content to let this continue. Their oldest member was born in 1993 and is barely legal to drink in his own country (Mark, from the US of A). Boys will be boys! 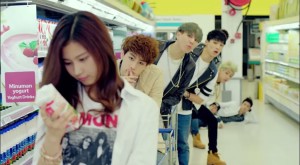 This unabashed, hormone-driven youth makes for some pretty enjoyable scenes in the MV as a whole: the cheeky waves at the pretty store girl, dancing up a storm in carparks, chasing after girls while seated in trolleys — it just seems pretty representative of youth as a whole in its blatant ridiculousness and undeniable charm. If there is ever a time to be both endearing and ludicrous, is it not youth?

A personal favourite scene is when the boys of GOT7 are trailing adorably behind the object of their affections, and Jackson does this ridiculously cute thing in which he stoops to tie his shoelace to avoid getting noticed by said creature of beauty. If there was ever a troupe of boys who defined irrepressible, it would be GOT7 in pursuit of “A”. 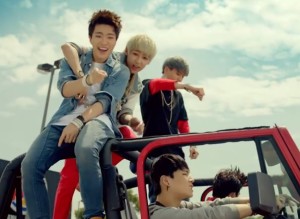 The choreography further aids the natural charm of these boys. It’s bouncy, fresh and enabled by the buoyancy of youth — think lots of jigs, finger-wiggling, and generally a lot of hopping around. There’s the attendant gymnastics somewhere in there as well, and I’m going to assume the “acrobatics group” marketing is just going to carry on until someone gets hurt (God forbid!). Oh well.

Aside from the cheeky charm the boys bring to the MV and song, there really isn’t that much to write home about — it doesn’t seem as if they were going for groundbreaking with this release either, but for personable and pretty (succeeded very well on both counts, thank you).

There were some strange inserts: the enforced international love was strong with this one. While I understand they filmed the MV in Kuala Lumpur, I am rather perturbed by the wedging in of as much racial diversity as possible. Does adding non-Asian persons bring up the swag of things in general? The insertion of what appears to be individuals of African descent bopping away in cars and white girls rocking out to the music — does this somehow add to the street cred of things in general? 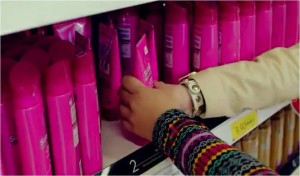 There was also some seriously distracting product placement going on there. The Burger King signboard hanging out in the background was still vaguely understandable, given that it was a location shoot and they could hardly be expected to dismantle the billboards all around, but if they’re going to be so blatantly advertising for Sunsilk, I hope they get in some of those endorsement deals soon. If it helps, it’s not a bad shampoo, and luscious hair always does boybands good. Bring on those Gatsby-worthy locks!

The song really isn’t much to write home about though. Unquestionably, Youngjae and JB carry the chorus and play off each other’s tones to keep the track somewhat dynamic. It’s encouraging to hear some solid pipes there; hopefully they’ll get more challenging songs soon. JB in particular pulls off some tricky riffs that you didn’t see coming, and in a song that runs the risk of being repetitive to the point of wearing out, it’s more than welcome.

The rap induces in me Möbius-esque feelings of simultaneous secondhand embarrassment and an irrepressible desire to pinch cheeks. The lyrics are sadly so, so bad — Jackson’s “What are you afraid of, I’m not all that good either / But I think we’ll make one hot couple” and Mark’s “It’s not working / So stop fronting / I know you want me let’s start talking” give me the jeebies. At the same time, however, their youth and charm redeems it, at least for the video — the teenage swagger they exude there probably makes these lines more bearable than in pure audio. 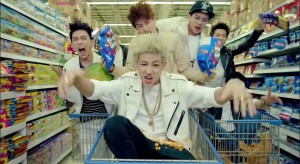 Overall, it’s an adorable effort, though I can’t help but wish someone would write JYP groups better title tracks. Your kids have solid performance skills, enough personality to overload a landfill and charm enough to get China off the Spratlys smiling. Give them better! We’ll be waiting, prayer circles assembled.