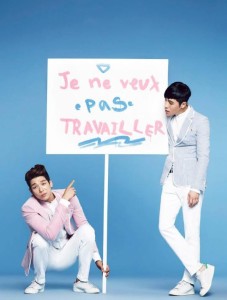 Power-vocal duo Homme have returned after three years of hiatus. During that time Lee Hyun (originally of 8eight) completed his compulsory military service and Changmin promoted with his other group, 2AM, both domestically and abroad. Although both men have been preoccupied with worthy pursuits, it is great to have the talented, charismatic duo back together again. They swept the charts with their first two singles, “I Was Able to Eat Well” and “Man Should Laugh,” so hopefully they have enough of a fanbase left to bring their name to the spotlight once again.

Unlike their past singles, which were emotional and dramatic, their new song “It Girl” has a bluesy and bright feel to it. Although as a song it doesn’t push the two men’s vocal range as much as it could, it does still make use of their talents. The MV, likewise, is suitably fun and funky to match the tone of the song. There are sexy moments, fun moments, and just plain downright confusing moments, and it’s all wrapped up in a summery color palette of pastel blue and bright pink.

First on the list of awesome things about this MV – Diversity! No need to read the entire review to talk about what we all noticed first. Yes, this MV has women of racial diversity in it — and not the half-assed, offensive, objectifying type of diversity either. This is one of the few K-pop MVs I have ever seen where there are women of multiple races and they are all treated in a similar fashion. Yes, that “fashion” is objectifying, but at least they all get objectified together, right?

All three women are portrayed as attractive, all have their own solo parts in the MV, and although Kyungri of Nine Muses is clearly the main character, the focus on her doesn’t trivialize the inclusion of the other two women. Lee Hyun and Changmin even handle flirting with women obviously taller than them well. It is especially important in a song about the ideal “it girl” to offer more than one option of what “it” is. Clearly all of the women in the music video are still stick skinny and, as I mentioned, tall, but at least they are of different races. Baby steps are still steps, after all. 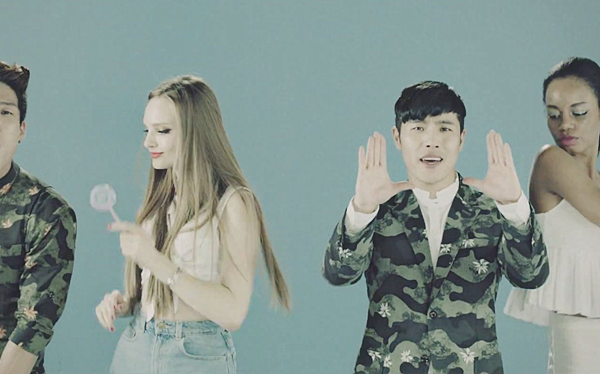 There isn’t exactly a plot in the MV, but the lyrics do center around the men trying to win the “it girl” for themselves. Kyungri’s role in the MV is controlled by how the men are treating her. When they are caught up in arguing about which one of them she “belongs” to she acts as an object, laying on their laps without moving or even blinking. When they are singing to the camera and she is in the background, however, Kyungri comes alive. She dances around funnily and waves her lollipop around in in the picture frame behind the singer as he ignores her.

Although the men objectify her when she is with them, it seems like the director was trying to give her character more of a personality. As she lays in their laps she eyes the camera like “why is this happening to me?” and she never actually gives in to either man. The MV doesn’t take the supposed relationship beyond flirting, and that fits with Kyungri’s character’s personality as well as works with the sassy tone of the song. 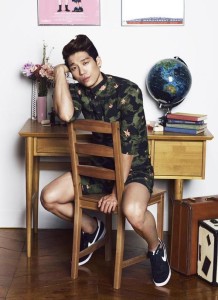 There are moments of strange symbolism that the MV could have done without, certainly. The use of army men as props makes sense considering that both Changmin and Lee Hyun have completed their service periods, but the rest I have no explanation for. There are moments that feel vaguely sexual, but the innuendo isn’t the usual super obvious hose/ice cream/flower type. What is sexy about a girl on a child’s rocking horse? We may never know.

Despite the confusing nature of the images, I can’t deny that the MV is visually appealing. Even when I had no idea what one thing had to do with another, I still enjoyed looking at them. Blowing on ice, splashing paint, and animal photos may not make sense, but at least it all looked beautiful against the MV sets. I can’t say the same for Changmin and Lee Hyun’s outfits, which should probably be burned in a fire along with every other piece of “stylish” camouflage wear ever.

This MV left me feeling satisfied after watching it — and it wasn’t just because the duo are looking more handsome than ever. Between the fun props, the engaging colors, and the gorgeous, racially-diverse women, it was hard not to be drawn in to “It Girl.” The MV also suited Homme because although they are famous, they aren’t the type of idols you put in a box and have dance around in metallic outfits. The whole package works, in other words, making it easy to overlook any flaws in this comeback.