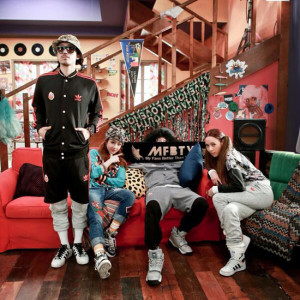 Quite frankly, whenever legends Tasha and Tiger JK do anything, people take notice, especially when that something is introducing a new artist on their label Feel Ghood Music. We welcome Kim Euna (changed to Yuna for promotional purposes because it was apparently easier for people to read and understand than the actual spelling of her name). Euna is another graduate of the YG Entertainment Academy of Shelved Artists, having been a trainee for the company for a while after appearing on Superstar K, then cut from a potential group of first ten, then six trilingual teenagers. Oh well. YG’s loss is everybody else’s gain.

Before we go anywhere, it simply must be said—Kim Euna is actually the most adorable thing to ever happen to hip-hop. That’s not at all meant as disrespect, but quite literally, she’s just the most precious pixie to ever exist. That being said, it would be understandable if audiences were tempted to raise an eyebrow at the effervescent teen being added to the Feel Ghood roster. However, if there’s one thing Tiger and T know a thing or two about, it’s hip-hop, and it’s safe to say Euna definitely has the flow and delivery to hold her own with the legendary artists who’ve taken her under their wing.

The song itself is the quintessential “we’re through” break-up song, and Euna isn’t pulling any punches. Though the MV is quite cutesy and the music is catchy, the song is actually far from it. Trust me, when you quote Erykah Badu (“You betta call Tyrone”), your intent isn’t to let him down gently. She goes on to list the unfortunate beau’s indiscretions, including “the same old excuses, typical set-ups, the same lines, obvious explanations you always give me” and “when night comes, you get drunk and weave through the night streets.” Then she lays down the Badu law and tells this faceless loser, “Please don’t come back.” T adds her crystal clear vocal to the mix, singing the English lyrics, “I couldn’t go another day. How many times you’ll never change. And the more they change, they stay the same. But I’m fine.”

It’s not a new trope by any means. But, after all, breaking up with someone who’d rather get drunk and hang with his dudebros than be with you is as old as the first sip of vodka. The music belies just how fed up Euna is with her ne’er-do-well ex, but rather than conflict with her aggravation, it illustrates just how happy she is to finally be rid of the piece of dead weight. 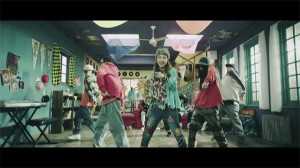 The video for “Without You Now” tells a completely different story. In it, Euna is your average teenager in high school who wants to fit in but whose voice is just too small to be heard over the din of “Mean Girls” and bboys, with all their bravado and machismo. The MV illustrates one aspect of the social makeup of high school—the talented nerd who acts as the lackey of the popular girls. Before a school talent show, she attempts to write out a routine, practicing in front of the mirror, changing the lyrics. Interspersed with her struggle to create the perfect routine, we get shots of her in what appears to be a hangout spot, complete with her posse of dancing guy friends and the MFBTY crew sitting on the couches and acting as the cool older brothers and sister to this adorable teen.

The day of the talent show, Euna sits down in the back, as if shying away from all the attention of the stage. Then walk in the princesses of the school, a group of fly girls similarly clad in shiny blue warm-up jackets and ’90s hip-hop inspired jewelry and hairstyles. It’s clear that Euna has been sent to save the seats for these young ladies. Suddenly, the leader of the bunch sheds her jacket to reveal her “sexy” outfit—pink tank top with a slightly bigger sleeveless shirt tied at the waist and salmon-colored hot pants. She goes up on stage and struts her stuff in your typical “I’m sexy and I know it” dance routine.

Our precious little heroine sits in awe, suddenly feeling the urge to go up on stage and show what she can do. But her nerves and the apparent ridicule of our popular girl give her pause. When she heads backstage, awaiting her turn to dazzle the crowd, she hesitates. Tiger JK, as the proverbial wise ahjusshi, stops her from running away and gestures for her to just go on stage and do her thing. She gives a definitive nod, then slowly approaches the microphone. She closes her eyes, and then in the next moment her bros from the hangout spot show up and aid her in performing her heart out, drawing the praise and adulation of the fickle teen audience and giving our popular girl a little kick in the chin. 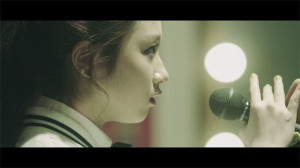 Whether it’s actually just her imagination giving her the courage to perform or the actual performance isn’t totally clear. The ending is rather cheesy. Of course we expect our talented outcast to surprise everyone with just how talented she is and give her more popular peer a dose of her own medicine. However, that doesn’t stop the video from being just good, clean fun.

The video and lyrics don’t exactly match, but both lyrics and MV are typical in their own little ways (the song being your average badass girl breaking up with her no-good boyfriend, the MV telling a common story of the underdog prevailing). That being said, both are definitely a great introduction to Kim Euna, simple, bright, and a great example of her seemingly broad talent. Not bad for a first single, I’d say.