Not sure if I’m the only one unaware of the fact that Jung Joon-young and Younha are long-time friends. In any case, the two have been working together for three months to release a rock ballad for their fans, showcasing their passion for the genre. While Jung Joon-young is well-known for his love for rock, I typically associate Younha with her sweet love ballads. Thus, I was pleasantly surprised to see her name beside Joon-young’s. 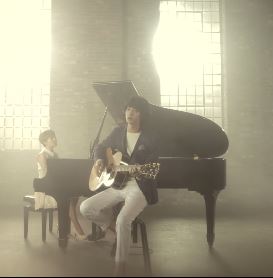 The song is aptly titled “Just The Way You Are”, boasting a beautiful piano and guitar instrumental played by the two singers themselves. Not to be confused with the Bruno Mars song with a similar name, I especially like the use of “we” in the chorus, demonstrating solidarity and friendship. “Just The Way You Are” is a rousing anthem to everyone to shed the fear of being imperfect, of being different, of being quirky.

Right off the bat, I initially assumed that it was going to be a gentle ballad, judging from the laid-back nature of the opening. But no, I was astonished, in the best way possible, by the song seguing quickly into a hard-hitting rock chorus, before it transitioned back to its relaxed nature.  The song starts off softly with Joon-young’s deep and sombre vocals, and then Younha’s angelic voice chimes in. This duet is a perfect mesh of their two contrasting voices, and it makes for a very refreshing listen.

The one phrase that stands out from the song — 괜찮아 (gwaenchanha) — means “It’s OK”. Even to a non-proficient Korean speaker, it’s possible to pick that phrase out, and in itself, it pretty much embodies the entire message of the song. Although we try to hide our flaws that people reject, it’s actually OK, and totally fine, to let these little blemishes show. 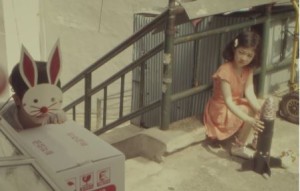 The MV is filmed from the point of views of two children, who are usually my favourite characters for MVs because their innocence mocks our jaded view of the world. In this case, we have the story of two children — a boy who likes to pretend to be a rabbit by wearing a mask and eating carrots, and a girl who aspires to be an astronomer and is obsessed with all things related to space. From the get-go, we get a glimpse of how their parents disapprove of their eccentric interests and prevent them from cultivating their passion.

It’s adorable how the two children immediately become friends. They both have their individual quirks and are used to facing rejection from others. Thus, when they spot someone who has gone through a similar experience, their identical insecurities make them instant allies to trust each other without any reservations. The chorus encompasses the wordless support they’re giving each other, something we adults should make an effort to do as well.

The less perfect version of me is okay
A little different from others, you’re okay too
We’re looking at each other with differences
When we’re together, it’s beautiful 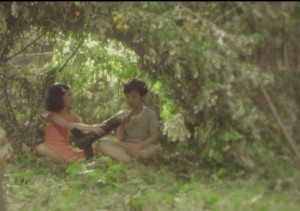 By nature of humans, nobody is perfect, no matter how hard you try. Instead of constantly striving to reach this unattainable level of perfection, why not just embrace our kinks as what makes us unique, and accept it as part of us. Instead of hiding it, we should celebrate it.

And really, what gives a certain someone the right to adopt a holier-than-thou attitude and impose his own standards on others. The parents in the MV accurately represent this antagonistic character in our lives, expecting individuals to live up to a certain standard, that they themselves might fall short of. If everyone were a little less guarded and more open about their own faults, the world might be a much better place to live in.

Hope seemingly seems to be restored in the world as the two children find their own hideout, detached from the rest of the world, especially their controlling parents. They confide in each other by sharing their rockets and rabbits — symbolising freedom and new life respectively. In case the rain wasn’t foreboding enough, their parents discover their secret place and drag them away from it.

Just in case it seems that all hope is gone, the ending puts an immediately smile on my face. While the two children have already grown up, the girl is still pursuing her passion in astronomy, and when the boy appears, she passes him the rabbit mask that she has been safekeeping for him all these years. He puts it on, and the ending scene mirrors the same way in which they met, but with elevated confidence and assurance of themselves. 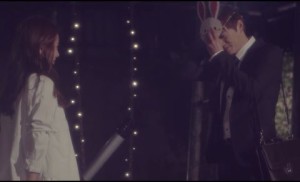 While it’s possible to view this song in a romantic light, I’m more inclined to see it as an ode to humanity. While we often get depressed trying to meet people’s expectation by pretending to be someone we’re not, sometimes all we need is someone, to reach out a hand and say “It’s OK, to be yourself — imperfections and all.” There’s strength in numbers; there’s beauty in imperfections.

A song about accepting yourself, and accepting others — such a stirring message put across in the simplest manner. This release is indeed a quality release — beautiful melody, inspiring lyrics, top-of-the-notch vocals, thought-provoking MV, and wonderful cinematography. I think this deserves a 5/5.