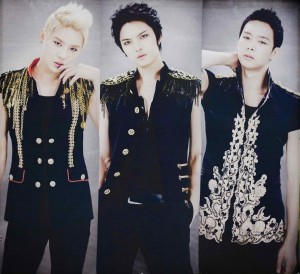 It’s official! All of JYJ fandom is in an uproar because the men have finally revealed plans for their comeback, complete with a trailer!

It’s been three years since their sophomore album In Heaven, and fans have waited with bated breath for the group to finally release the follow-up to what most would consider their best work to date. Through musicals, K-dramas, films, and even a comeback concert in Japan last year, Jaejoong, Yoochun and Junsu have hinted at a new album, but conflicting schedules have continuously pushed the release back.

With their enlistment looming, it seems JYJ is fervently trying to give their fans everything they possibly can to make the two years bearable in their absence.

Okay, so it’s only sixteen seconds. But the appearance of an actual date of release is enough to make everyone in fandom lose their minds. Through the group’s prolonged absence, each member has pursued their interests with vigor and dedication.

Now with Junsu’s matured vocal technique due to his continued work on stage, Jaejoong’s new-found competency in the rock genre, and Yoochun’s hints at compositions through fanmeetings, there’s such an incredible feeling of an anticipation from fans, it seems the whole lot of the fandom is ready to combust. Watch out for the men of JYJ’s long-awaited new album in early July and their world tour to follow shortly after.