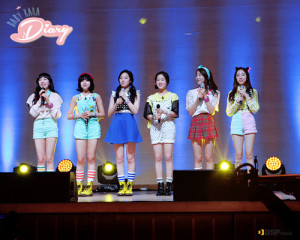 For a show named KARA Project, there sure is a lack of KARA in the episodes thus far. And that’s my main gripe with this reality show: It feels like I’m watching a pre-debut show of a new 7-member DSP Media girl group led by the capable Sojin, not an intense competition to select the new member(s) of KARA. Why even are these seven girls performing with each other instead of practicing with KARA to see how well they meld with the group? In a 6-episode show that’s all about KARA, the remaining three KARA members should have appeared on-screen by now. This would do a lot to quell our worries about performance and personality integration.

We’re also running on a pretty major timelag here. Sojin’s had her hair cut and Youngji‘s been performing since May 31 or before, but these events were only aired on June 10. Baby KARA performed a showcase on June 15 at the Olympic Park Woori Art Hall, where audience votes counted 30% in the determination of who will proceed onto the finals. However, this footage will not air until episode five on June 24, setting up the sixth and final episode. So if you’re wondering how Youngji, who didn’t even perform in the first two episodes, could still win a large amount of support in the post-show votings, the answer likely pertains to her previous training under JYP and the timelag, since she’s been performing in the live stages for a while. 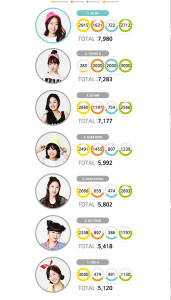 In these episodes, we finally received clarification on how many new members will be selected–or wait, we didn’t. The director begins one lecture with “let’s say two of you are accepted,” but this is a murky allusion at best. I have so many questions about why the show is the way it is, but since these questions could fill an entire letter to DSP Media, I’ll move on to speculation.

For fun, here’s my personal ranking of how well I think they’d fit into KARA, based solely on what is shown during episodes and my own viewings of their other live stages (available by searching “Baby KARA” on YouTube): 1. Somin 2. Sojin 3. Chaekyung 4. Youngji 5. Shiyoon 6. Chaewon 7. Yuji. I actually think Yuji is one of the better performers, but she is 17 and the age gap is simply too much to be viable in my opinion; her skilled dance style, while impressive, doesn’t exactly fit KARA’s style. 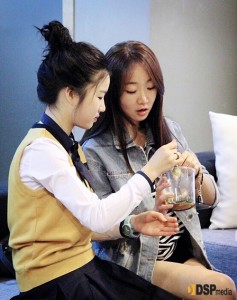 If Sojin is not chosen as a KARA member I will eat my hat and my shorts, because the editing on her could not be any more obvious. I’d said she was one of the two frontrunners in the first episode review, but wow, she has completely eclipsed Somin, because DSP is taking no chances on anyone else in the editing room. Sojin is on-screen for far more time compared to the others, and her struggles as a trainee and as the eldest are highlighted more than other contestants–basically her character edit is more extensive. I’m not saying she doesn’t deserve the spot, and personally I think she is one of the better fits by virtue of her age alone, but the editing on her is extremely obvious. Her redemption arc from episode two, where she received bad reviews, is already completed: At the end of episode three, two of the three judges name her as the best all-around, and every single contestant (including herself) names her as the one to beat. I couldn’t agree more.

I also think that Shiyoon and Chaewon are sadly but clearly going to be the first eliminees, because the show spends little to no time on them and in live stages, they are rarely in the front or in the center, the power spots of staging. I’m split on Yuji because I am 99% sure she will not be chosen, but I do not understand why they would have placed her in the show, unless to increase her exposure with plans of debuting her later on. If there is a second new member chosen, I will go with Youngji/Chaekyung for my prediction. While Somin continues to perform well, I do not see DSP placing someone who looks so much like Hara into KARA. 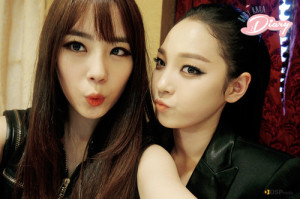 Basically, I love these seven girls as their own group. They refer to Sojin as leader and Yuji as maknae, and Somin and Chaekyung have been friends for three years already. Spending so much time on Sojin’s charming, impromptu birthday party and hidden camera only crystallized how much I like the seven of them together. Splitting them up will likely engender a further public relations crisis, which DSP will want to avoid, unless the company has plans to unveil a new girl group, stat… Which may have been the plan all along.

For those curious, in the annotations I’m linking some of the performances I watched to develop a more complete picture of Baby KARA in relation to current KARA. Please share your thoughts and predictions in the comments!