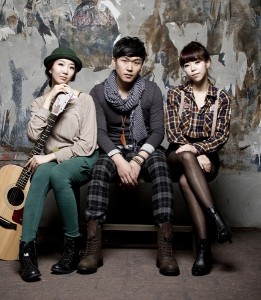 It’s time for another feature in our K-pop Indie Gem segment! This week, we’re highlighting Vanilla Acoustic, a trio currently signed under Shofar Music. The current lineup of members consists of producer/vocalist Vanilla Man (Jung Jae-won), vocalist Sung-ah, and guitarist, pianist, and vocalist Tarin. For the material that came before 2012, member Na-rae was present in the place of Tarin. The group made their first release in 2008, and since then, they’ve been presenting their relaxing blend of music for all to enjoy.

Vanilla Acoustic’s discography is satisfying. They debuted with mini-album Vanilla Man and subsequently released the mini-album 2nd Story and the full albums Romance of Underground/Semi-Basement Romance, 2nd (Part 1 and 2), and just earlier this month, 3rd Part 1 ‘Eudaimonia,’ all among other singles and OSTs. Despite the implications of ‘vanilla,’ the music is anything but; the group has taken the time to fully appreciate vocals and instruments in a dynamic way. Through all of Vanilla Acoustic’s discography, there’s a consistent sound that captures emotion, but only occasionally does the group stray beyond the calmer borders of folk and ballad. In that manner, Vanilla Acoustic’s albums remain flavorful and intriguing even as the simple components don’t vary.

To start us off, we have “Come to Me” off of Semi-Basement Romance (2012). This album departs from the previous ones, as it works towards a better balance of vocals and instrumentals, while embracing a more emotional turn. Starting off with a clear but hushed voice, “Come to Me” progresses unhurriedly. The whisper quality of the vocals holds attention while building suspense within the song. The voice never adjusts to a clearer sound, making the song seem like it ends faster than it should.

Another song from Semi-Basement Romance is “Cida.” Taking on a more sorrowful mood than my previous pick, this song carries emotional appeal. The guitar stands out particularly — it highlights the vocals when they’re present, and shines when they’re not.

All of 2nd (2013) brings a wonderful sophistication and maturity. From 2nd Part 1, “잿꽃” bears a thoughtful and wandering melody. The careful layering within the song accentuates the melody, to maintain swells in the music.

“Find Hidden Heart” was released as a single in early 2013 and also a part of 2nd Part 1 when it dropped later in the year. The sweet ballad is a good example of one of the group’s duets. Both voices meld together nicely, without one eclipsing the other.

“Wasteful Man” of 2nd Part 2 is bittersweet. The lyrics tell of a man who seems perfect, but turns out to be a womanizer. The repetitive accompaniment warns against the man through accentuation of the higher notes. The additional quick turns in the accompaniment suggest the later change in attitude as well. The song is lively and easy to follow — an easy favorite.

From Vanilla Acoustic’s latest 3rd Part 1 ‘Eudaimonia‘ is “Maybe Once You Were First.” From the start, the opening song jumbles together notes that almost tumble into a cacophony. By the end of it, the key change lets that pattern of notes sound somewhat more cohesive, but still retains some outlying elements. This album contains a heavier beat than previous ones, grounding songs and lending them a weightier air. “Maybe Once You Were First” strays slightly into popular territory, with a melody that wouldn’t sound out of place in the 90s, but the verses keep the song from fully crossing over.

It isn’t by accident that all my chosen songs are from albums 2012 and on. Previous albums were united and nothing to sneer at, but they displayed a clear contrast to Semi-Basement Romance and those that came after it. The group moved from a fuller instrumental to coming closer to embracing the ‘acoustic’ nature within their name. Vanilla Acoustic has managed to blend vocals and instrumentals in a manner that initially seems common but in reality is anything but.

If you’re interested in more of their music, you might want to check out Shofar Music’s YouTube channel for selected uploads and live performances. And keep your fingers crossed for a Part 2 to their latest release to drop later in the year!