HOTTEST do not have an easy life. Not only was there the dating reveal from Nichkhun and Tiffany (obviously, there’s been some fan outcry over this), but 2PM are also taking their own sweet time to release new Korean material. Their last album, Grown, came out more than a year ago, and since then the band’s focus has been on the Japanese market (which is great for Japanese fans but difficult for the international ones, since it makes following promotional activities so much harder). Even when members ventured towards solo efforts, as was the case for Jun.K and Junho, they decided to do so in Japan.

But alas, Korean fans and those who enjoy easy accessibility of music videos and other media can rejoice, because Jun.K has returned with a Korean version of “No Love.” The song was previously promoted in Japan, as one of the singles from his mini album Love & Hate. There seems to be no need for us to compare the Korean and Japanese MVs, as there are few differences between them. This review will only refer to the Korean version.

“No Love” begins in an unusual but fitting way — instead of a pop melody, the first minute of the song delivers hints of a song for a musical. The music, as well as Jun.K’s vocals, build up to a climax while the viewer is introduced to the main characters of the music video: Jun.K himself, a panda that seems to represent Jun.K’s past self, and a doll which stands in for the woman to whom the song is addressed. During the MV, these characters play out the story that is told in the song’s lyrics — the viewer finds out that one of the characters has been badly treated and abandoned by their partner, but this character continues to pine for the person who has left them.

To convey the story and its atmosphere, the MV works plays with symbolism and a dramatic setting. As expected, there are also the requisite ballad music video shots of the singer — he’s seated at a piano (in a desert no less) and there are close-ups of him singing. But these scenes are interspersed with shots of Jun.K’s former MV girlfriend burning up and disappearing in his arms, with him being shot presumably in the back by said girlfriend — he shoots his own mechanical heart in the later part of the video. This could be overdoing it if the MV was understood in another context, but in “No Love” it works due to the song’s theatrical feel. 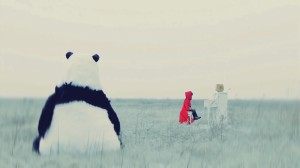 The same could be said for the setting: a broken-down circus in the middle of the desert. The contrast between the colorful, messy tents and circus props, and the plain, empty desert is a nice way of portraying the turmoil within Jun.K’s heart, and his desperate attempt to suppress his feelings. It also lends itself to being used and filmed with great impact, in a short amount of time — Jun.K’s red suit consistently stands out against the deep-blue sky and the ocher sand.

Apart from tumult, the circus and the giant ‘Belle Epoque’ sign in the middle of it might also stand for a sense of nostalgia, which would tie in well with the subject matter of the song. To talk a bit about Jun.K’s Japanese promotions after all, it ties in well with the whole Love & Hate concept. The Japanese video for “Love & Hate” references the earlier part of the 20th century, as well as wizardry, a quintessential circus attraction. In an industry of constantly changing concepts, such consistency should be admired.

The song “No Love” itself could be classified as a smooth R&B song, with slow bittersweet verses and a powerful chorus. Concerning the lyrics, it might be interesting to point out that Jun.K participated in writing them. Apart from the aforementioned musical-like beginning, “No Love” is not very unusual although it is definitely pleasant to listen to. 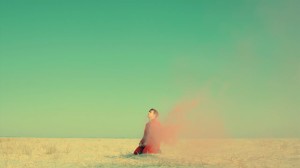 Jun.K’s voice on the other hand is quite unusual for K-pop. It’s husky and warm, and though the reader may already be annoyed by all this musical talk, this reviewer can’t help but imagine Jun.K in some Phantom of the Opera-style villain role after seeing and hearing him in this music video. And with his stint in The Three Musketeers, there’s always hope for something like this to become a reality.

In conclusion, the “No Love” music video succeeds in symbolically portraying the song’s storyline, while using impressively colored visuals and a setting that helps to invoke heart-wrenching feelings in the audience. Therefore, it receives a 3.5 out of 5.

The corresponding song dares to be a powerful ballad, and highlights Jun.K’s lovely vocals, and it garners a 4 out of 5.

Were these fair ratings? Let us know in the comments section below!