AOA Searches for a Signature Sound on Their First Mini-Album 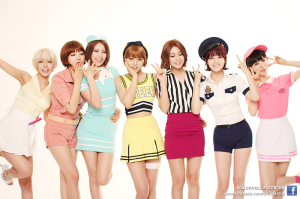 It has been a tremendous year for AOA. “Miniskirt” was a resounding success on the charts and helped them to grab their first music show win on Inkigayo. As a group, AOA has an interesting dynamic with their dance and band unit. It has been a while since the band unit, AOA Black, has performed; since the popularity of “Miniskirt” helped to put AOA on the map, it remains to be seen of what will become of the band unit which also contains member Youkyung. FNC Entertainment have their hopes that they can capitalize on AOA’s success earlier this year and have brought Brave Brothers back to help with production efforts on AOA’s first mini album, Short Hair.

The introduction to the album utilizes a bright and hazy sound. “Fantasy” name drops AOA a few times and plays into their angelic concept. The lyrics are definitely attempts at be charming and establishing an idyllic image for the girls. It is only about a minute long, but it does an adept job of setting the tone for the album. There are some jazzy elements with horns sprinkled throughout the chorus. There is also a falsetto refrain — that has become kind of a recurring vocal component of AOA songs and is also reiterated in other songs in this mini.

“Short Hair” is the Brave Brothers and Elephant Kingdom produced track that serves as the titular song for this set of promotions. My initial gripe with “Short Hair” was its stylistic similarities with “Miniskirt.” Brave Brothers are a team notorious for recycling certain sounds in their production. This time around, the melodic refrains return in the form of a slower “ooh ooh ooh” section. The horns are brought back but similarly they only have a minimal role in giving the song its ‘jazzy’ flair. Instead, the synths and beat are the primary tool in the production. On its own “Short Hair” is still a catchy pop tune. What AOA is doing better this year is capitalizing on the strength of its two main/lead vocalists, Yuna and Choa. These two ladies have a special vocal delivery and paired with Jimin’s charismatic rapping — which seems to be toned down in this song – and the group has a means to stand out on their musical merits. The lyrics are an introspective look at their outward insecurities. The girls ponder about their looks, but go confidently with their new short hairdos. It’s a breezy track with a hook that is perfect for the summer season.

While “Short Hair” had hints of being a fun summer track, “Joa Yo” seemed made solely for the purpose of enjoying the season. I imagine if there was a video for the song, it would probably follow the tropes of other summer singles. “Joa Yo” brings back those soft falsetto vocals in hook. Jimin and Chanmi trade lines during the rap section, and it helps to add a nice rhythm to those parts. The song features a piano melody with some sounds of ocean waves interspersed. The lyrics are about enjoying a summer night. Because it is tailor made as a season song and because of its catchy hook, tt actually might have been a better choice for a single instead of “Short Hair.”

“Soulmate” changes up the atmosphere with its mid-tempo rhythm. The prolific Brave Brothers returns to helm the production. While it relies on those soft melodic falsettos from Choa and Yuna once again, the instrumental portions are different enough to seem out of place. It relies more on electronic generated sounds and a snare beat. The lyrics are also a bit sad:

“Now that my soulmate ran away,

My heart is collapsing now.

Where is my other half?

Come back to me soulmate.”

While this song does stand out, the lazy and predictable production bog down what could have been a great song. Vocally, the girls sound great and Choa’s vocal section at the end is just great. Maybe if they rework the song to be more organic with live instruments, it might have worked out better.

The last track on the mini-album (aside from the instrumentals) is “You Know That.” It brings back the instruments from the first half of the album. The energy here is great, and it could possibly work as an AOA Black track because of the full band sound. It is a rock jam and all the girls seem very confident. The lyrics is a playful game of back and forth as the girls tell their love that although they can’t talk at the moment, their lover is the only one that knows their heart. This is probably my favorite track on the mini-album, and it showcases AOA’s strengths in handling a band fronted song.

Overall, the mini-album is a nice compilation of tracks for the group. While it relies heavily on Brave Brothers, the mini-album is able to show that the group can carve out a solid AOA sound. The rapping style of Jimin and the vocal colors of Yuna and Choa are distinguishable enough to set the band apart from other female groups. Where this mini-album is lacking is on the production front. While there are some great notes here and there, aside from “You Know That,” it all sounds interchangeable with other female groups. I can see where it is difficult to decide what direction to take AOA. They have some talented vocalists and also have this band element to them. Their vocalists have proven that they can carry a song and make it stand out enough as an AOA track, but I feel like their specialness still  lies with their more band focused tracks. This mini-album is a solid if at times uninspiring effort from the group.