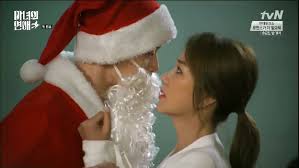 Rom-coms are a lot like cake. They’re sweet, plentiful, and there’s a flavor for everyone. Of course, not all cakes are created equal. A German chocolate cake made by a pastry chef is going to be better than one from Wal-Mart. I hope. Similarly, a rom-com from tvN has much higher standards, due to their reputation for fun but poignant dramas built by the Answer Me and I Need Romance franchises. Witchs’ Romance is definitely on the road to living up to that standard.

Witch’s Romance is a remake of the 2009 Taiwanese series Queen of No Marriage. Ban Ji-yeon (Uhm Jung-hwa) is a reporter just shy of 40. She’s dedicated, aggressive and so awful to be around that her staff all calls her The Witch. The only person who actually likes her is her photographer, her mother is obsessed with marrying her off, and her only friend is her goldfish. . .who dies of loneliness. Despite all this, Ji-yeon is clearly a good person, even though she’s not nice. She may not let a lot of people close, but those she does have her loyalty for life. Her staff may complain about her, but when she’s injured, they literally run to her side. Ji-yeon is dedicated to the truth above all else, and doesn’t mind if she offends people on the way there. . .even if this results in her fish dying of loneliness.

Enter Yoon Dong-ha, played by Park Seo-joon. He and his buddy Yong Soo-Chul own an odd-job service, despite Soo-chul being a chaebol and Dong-ha having gone to medical school. The two laid-back 20-somethings embody the idea that a prestigious career doesn’t necessarily make you happy. Of course, you may have to dress up like Santa in March or crash with a friend because you can’t pay your rent. 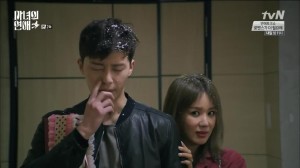 The two find themselves running into each other by coincidence, at a charity event, in a bar, and at a shop owned by a bipolar shaman (Narsha). That last one is the most important, as it introduces the idea that Ji-yeon’s difficulty’s are not simply part of life, but bad luck brought on by curses cast by those she’s angered. It also implies that Dong-ha and Ji-yeon’s coincidental run-ins are not coincidence, but Fate micromanaging peoples’ lives.

The plot of Witch’s Romance is thin, and relies on a stunningly large number of rom-com cliches. In the first four episodes, we’ve seen repeated coincidental run-ins, innocent cohabitation, pretending to date a stranger, and woman left at the altar. That said, plot is not the reason anyone watches rom-coms. What counts is the execution, and the execution here is excellent. Witch’s Romance  is a drama where the small things are what really make it pop.

The good news is chemistry between Uhm Jung-hwa and Park Seo-joon is palpable enough to power Seoul for a month. The better news is Ji-yeon and Dong-ha are aware of this fact, and almost hook up. Sadly, this is dereailed by Ji-yeon’s main inner conflict– insecurity over her age. Ji-yeon has what can be charitably described as ‘a pedo-noona realization induced panic attack’ even though Dong-ha has no issues with starting a relationship– or at least having sex– with a woman clearly older than himself. 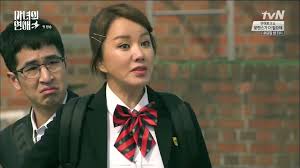 Ji-yeon is just one of those people who is afraid of getting older, and Dong-ha and his obvious youthfulness picks at that wound. She doesn’t regret how she’s lived her life, but the realization that the sexy young thing in her bed is over a decade younger than her is a smack in the face.  She can’t handle the fact that such is an event is possible, and keeps trying to ignore their chemistry because of it. Therefore, any time they connect over their age gap is twice as sweet as it would be otherwise, such as finding a song they both know and like– “Sunset Glow” with Ji-yeon singing the original by Lee Moon-sae and Dong-ha singing the Big Bang  cover.

The best thing about Ji-yeon and Dong-ha, especially Ji-yeon, is that neither is presented as someone who needs to be fixed. They were both happy before they knew each other, maybe a little unsatisfied, but happy enough. This is in sharp contrast to the two recent characters most like Ji-yeon: Song-yi  from You Who Came From the Stars and Joo-yeon from I Need Romance 3. All three women are tough, career-minded women with little-to-no social skills. Yet while Joo-yeon needed Wan to save her and show her how to feel, Ji-yeon and Dong-ha already fit together pretty well. They may end up influencing each other in the future, but only because they spend time together. You know, like how non-fictional people affect those around them.

While Ji-yeon and Dong-ha’s chemistry is what makes Witch’s Romance good, it’s all the little things that make it great. And when I say “little things” I mean the things that no on usually notices unless they suck, such as the music. The soundtracks for most dramas are not memorable. They’re like when you’re forced to take the free gift with purchase: you don’t it, you didn’t ask for it, you just get it regardless. Witch’s Romance has an excellent soundtrack that pointedly refuses to follow the boring norm. The instrumentals are upbeat and poppy and the first OST is, hallelujah, not a ballad! Instead, we have Spica‘s fun and flirty “A Witch’s Love”. Why can’t more dramas have fun OSTs instead of overused, sappy ballads that no one likes? 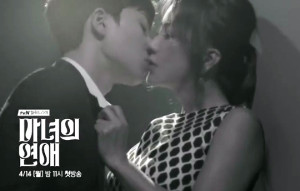 The production is laden with fabulous creative choices. Most notably, Ji-yeon’s habit of drifting off into crazy daydreams. They serve dual purposes, both providing some hilarious comedic moments (like Ji-yeon imaging her body being found and the cause of death being “Stress due to loneliness”) while showing the audience just what she’s thinking. The other really great production choice is not keeping the characters in a pop-culture. Usually, there is no pop culture in dramas. The exceptions are when pop-culture is plot-relevant, or if the writers want to throw in a meta joke. Here, pop-culture is referred to frequently, with drama jokes, to radio morning shows, to Ji-yeon’s apparent love of Spica. It makes it feel like the drama world is our world, not some mystical place where destiny does everything and  birth secrets are par for the course.

The cherry(s) on top of Witches Romance are the endless supply of funny moments. Dong-ha and Ji-yeon watching noona romance I Need Romance 3. Ji-yeon telling children Santa’s not real. Her managing to fit into her high school uniform, complete with one pant leg rolled up. Soo-chul getting nicknamed ‘Spinach-mold’. A lot of rom-coms tend to focus on the ‘rom’ only, but it’s good to know Witch’s Romance has ‘com’ in spades.

Witch’s Romance has made an excellent debut for a cable drama with episodes 1-2 pulling over 1%. It’s fun, frothy, sexy, and will no doubt keep viewers coming back for more. Any thoughts on it so far, readers?