What's in a (Fanclub) Name? 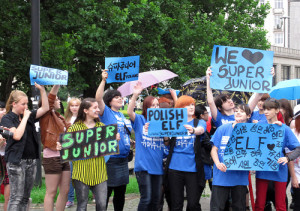 anclub names: that marker of identity in K-pop fandom, and the name branded across merchandise, fanboard messages and the occasional Twitter bio. There is no denying that half the fun of being a fan in K-pop is the wide variety of fanclub names that range from wonderful (pun not intended) to plain wacky. With the decidedly mixed reaction to GOT7’s announcement of their official fanclub name, I GOT7, let us take a look at the huge number of K-pop fanclub names and compile a list of the top ten.

In no particular order of merit:

While Shinhwa’s name means “legend”, Shinhwa Changjo literally means to “create legends.” It’s a neat use of Shinhwa’s name, a definite plus for a meaning that makes sense, and together with their fans Shinhwa has definitely created a legend by becoming the longest-lasting male group in K-pop until now.

Inspirit combines the “in” of Infinite with the word “spirit” to form a name that is pleasing to the ear. It is also one of the fanclub names chosen through voting, and hats off to Woollim Ent for making the creation of a fanclub name a process fans can take part in. 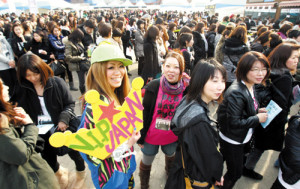 Short and to the point, V.I.P is derived from one of Big Bang’s early tracks and has been the name of their official fanclub ever since. “Very Important Person” encapsulates Big Bang fans rather effectively and on the plus side, it always looks cool branded on merchandise.

Although not technically gender-neutral, there is such an obvious and pleasing symmetry between the Beauty and the Beast. For that, I might just forgive BEAST for being an acronym for “Boys of East Asia Standing Tall.”

Achieving blackjack in a game of blackjack literally means getting 21, so in a sense 2NE1 = Blackjack. The best part of the fanclub name is how it incorporates so well into the other aspects of 2NE1’s branding, from the use of the four suits of clubs to represent each member to the design of merchandise incorporating (you guessed it) poker cards.

We all know the mythology behind the Cassiopeia fanclub name, but here’s a quick recap: it refers to the constellation that makes up a “W” in the sky, which is coincidentally what one gets tracing “TVXQ” on a keyboard. It’s probably only fitting that the Rising Gods of the East have a constellation for a fanclub name. The name for the Japanese fanclub, BigEast, admittedly pales in comparison. 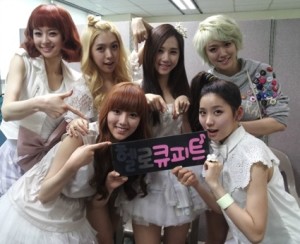 Despite Hello Venus’ rather unfortunate name when romanised in Korean (the “V” becomes a “B”, which makes for some potential mishearing mishaps), their fanclub name is a step up. Although Cupid is often portrayed as the son of Venus in classical mythology, the name was suggested by a fan and the members liked it enough to make it official. Either way, it’s a straightforward and cute name that does not rely on weird abbreviations or lost-in-translation puns.

Coined by leader Leeteuk to mean “EverLasting Friend”, which I suppose gets to the point of what a fan is supposed to be, as well as elevating fans from “fan” to that of “friend” status. ELF was also mentioned in Suju’s track “Superman”, though in its Korean name yeo-jung (which literally means “elf”) which does reduce the cheesiness factor a little.

Ailee’s fans call themselves Aliens, an admittedly adorable play on her name.

Stylised as ST★RLIGHT, VIXX’s fanclub name ticks off most, if not all, of the boxes on what makes a good fanclub name: it passes the proper noun test (can I say “I’m a/an ____” without sounding grammatically awkward?), it has pleasant associations to stars, and it sounds largely the same and identifiable whether in Korean or English.