Fxxk You to Love You: Ga-in and Joo Ji-hoon Dating 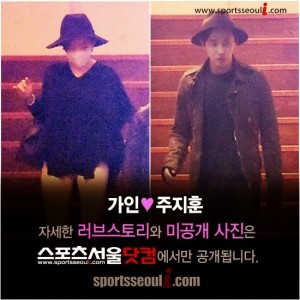 Another celebrity couple is announced. Sports Seoul released photos of Brown Eyed Girls’ Ga-in and actor Joo Ji-hoon on a date, and the agencies of both confirmed that the two are indeed in the early stages of their relationship.

A Pop Entertainment revealed that the couple has been friends for 8 years, but only started officially dating a month or two ago. Apparently, acting evolved into reality as their collaboration in Ga-in’s 19+ MV “Fxxk You” was the catalyst for their relationship to develop from friends to sweethearts. In fact, I was more surprised that they were only friends at that time, considering the sizzling chemistry and intimacy they displayed on-screen.

Given Ga-in’s mature image, the news doesn’t really come as a surprise to most. Fans of the Adam couple would undoubtedly be upset, although it does seem to be the case that the celebrities are using We Got Married as a platform to gain dating experience to eventually find their other half, as the case for Nickhun and Tiffany.

The couple is 5 years apart in age, but they seem to be a compatible fit with each other, given that their friendship has gone through thick and thin, specifically through Joo’s drug woes in 2009. However, netizens are perhaps not as forgiving, continuing to condemn him for his drug scandal and slamming Ga-in for her choice of partner. Readers would likely remember such a case with Lyn, who initially faced backlash from the public for revealing her relationship with MC the Max‘s Lee Soo, who was embroiled in a sex scandal.

In any case, we offer our congratulations to the both of them; hopefully film does not reflect reality, and their real-life relationship is much cuter than the one portrayed in “Fxxk You”.