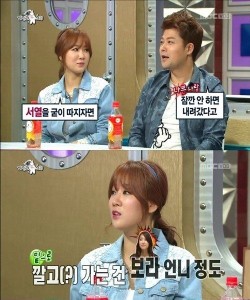 Variety shows that had been cancelled in the wake of the Sewol ferry tragedy are slowly beginning to return to TV screens. Among these was the notorious Radio Star, which featured Sistar‘s Soyu and Jeon Hyun-moo. Guess which guest this is about?

It all started with the MCs, having praised Soyu’s success with her duet “Some” with Junggigo, asking if her ranking within the group had improved as a result. Soyu gave a non-answer at first, but the MCs persisted, this time even bringing up fellow member Bora. To this, Soyu decided to try some comedy of her own:

I’m not confident or anything but as of right now, Bora unni’s smack at the bottom below me.

Soyu then continued the wise-cracking with Jeon Hyun-moo, declaring that his lazy living habits in his new house — which used to be Gong Yoo‘s — had ruined her fantasies of what would have been Gong Yoo’s sophisticated lifestyle.

When you think of Gong Yoo, there’s an image you conjure up, like he looks like he’d be sipping a glass of wine but Jeon Hyun-moo’s laying on his back]watching TV through his sunglasses.

Naturally, everyone was impressed with Soyu’s comedic talents and heaped comments of praise on her… not. To absolutely no one’s surprise, she was instead blasted for her “poor” conduct,as well as her looks, for some reason. There were also some comments about Soyu merely riding on the coattails of Junggigo’s fame, but that’s already a given. I mean, it’s not like Starship chose to debut their new R&B singer with Soyu because she was already well known to the public thanks to Sistar’s success and would help to raise Junggigo’s own profile in the public arena (as well as able to sing) or anything; it was obviously the other way around. 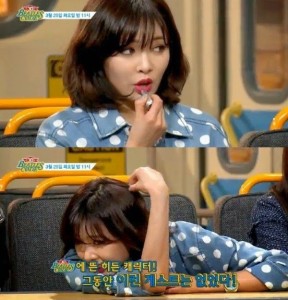 This isn’t an isolated incident, either. Another girl group member who had attracted similar comments is 4Minute‘s Hyuna. An appearance on Beatle’s Code 3D during “Whatcha Doin’ Today?” promotions saw her participating animatedly. She answered questions and told stories, but was also caught slumping, literally. The MCs used the situation to milk some laughs, though, and the show continued on.

Then while talking about how Cube Entertainment encouraged the members to date and get some publicity that way (much better than, like, releasing good music and stuff), Hyuna applied lipstick, as though to imply her own readiness to date. That’s right: she applied lipstick while her lips were moving. You’d think that kind of skill pretty cool, but apparently not everyone was impressed.

In fairness, though, that may be understandable: we’ve all been told off for slouching at some point in our lives, and the stunt with the lipstick perhaps didn’t come off as humorous as intended, though there was a positive article or two written about it. Hyuna also has a reputation for acting childlike on variety, and the lipstick stunt would have come off as an extension of that kind of behaviour rather than as an attempt to be funny.

One would think that female idols have to be serious all the time instead, but that is frowned upon as well. The infamous Radio Star incident with Kara‘s Hara is proof enough of that. Can’t take a joke? You’re criticised. Join in on the joking? You’re criticised for that as well. Perhaps the style of humour isn’t to everyone’s taste, but you’d think the issue would be taken up with the shows which dictate this kind of humour instead of just going after a random female guest. And it’s more often that not a female problem: I don’t see articles about Onew hurling pens and hitting his fellow group members in the face. At least Hyuna wasn’t throwing her lippy around.

That isn’t to say that it’s just a double standard happening here: female idols are also at a disadvantage in that they aren’t career comedians. Gagwomen themselves have problems to deal with: they can either outwardly reject their femininity and take with the fat-and-ugly jokes in return for positions of power as a MC — like Kim Shin-young and Lee Young-ja — or they can keep their femininity but freeze any chance for promotion — like Shin Bo-ra and Kim Ji-min (more about gagwomen can be read here). But both types of gagwomen are at least able to exercise their funny bones with (mostly) no negative repercussions. 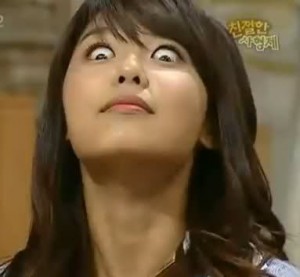 Female idols like Soyu and Hyuna aren’t afforded that luxury. It also doesn’t help that neither have reputations for being funny, like After School‘s Lizzy or SNSD‘s Sooyoung. But I still don’t see how the lack of a reputation for comedy means that these idols somehow can’t say funny things (or try to). People aren’t black and white: they can’t be just funny or serious all the time, even if they are projecting a certain kind of image to the public. If people didn’t appreciate Soyu and Hyuna’s humour, that’s fine, but to act as though they are somehow incapable of humour at all and everything they say is serious business seems ungracious.

There’s not much to expect from a sensationalist platform like Nate, but I do hope there aren’t people out there with such a black-and-white view about female idols making jokes; and if they do, maybe they should reconsider, lest Sooyoung’s face haunts them in their sleep.