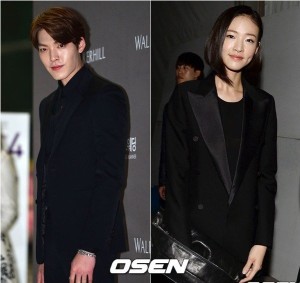 Spring is in the air and that means it’s time for new relationships to blossom! But unfortunately for Kim Woo-bin and Yoo In-na, it means time for their relationships to end. Both have confirmed their break-ups with partners Yoo Ji-ahn and Ji Hyun-woo, respectively.

Kim Woo-bin revealed last year that he and fellow model Yoo Ji-ahn had been dating for two years. The two had never hidden their relationship per se, but netizens believed that Yoo Ji-ahn had tried to capitalize on his rising fame after posting a photo of herself wearing an expensive shirt a fan had gifted Kim Woo-bin. Although the break-up was confirmed recently, the two revealed that they had actually broken up a few months earlier.

Yoo In-na and Ji Hyun-woo also released news of their break-up although this comes as less of a surprise as there have been speculations of a strained relationship, especially since Yoo In-na did not show up to Hyun-woo’s military discharge.

The two met on the set of Queen In-hyun’s Man, where they played lovers fighting to stay together across time. This developed into a relationship that was put on hold as Hyun-woo began his military service. Some speculated that his bold statement before enlistment was done to trap Yoo In-na while he was away, though we will probably never know for sure.

We hope that their break-ups will not hinder their careers and we wish all four the best!

Surprised about the break-ups? Saw them coming?