Man vs. Wild: The Power of Fangirls

Recently, Taemin ran the streets of Seoul chaperoned by self-employed female bodyguards — unfairly called sasaengs by people who are anti-love and anti-marriage – who sang “Oppa! Wait!” in a voice that could threaten the status of the Indian Myna. Apart from the fact that I almost expected them to whip out their morphers, transform into megazords, and kidnap a Lilliputian Taemin, I realized a greater truth – the importance of Idol Olympics.

Watching him sprint across the street at a speed which could almost be mistaken for excellent visual effects, I finally understood why these idols go through the grueling practice of competing in sports that add nothing to their artistic repertoire. Even the sports are thoughtfully chosen — Racewalking: to avoid fans that molest at airports, all the while maintaining a constipated smile on their face; Running: to avoid fans when they don’t have their lens missiles; Archery: to battle the zombie fan apocalypse, etc. Idol Olympics is not the entertainment programme you thought it was all this time; it’s a survival mission, it’s the Hunger Games. Also, Kris would look great as Katniss Finnick. 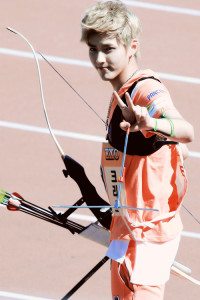 Obviously, Idol Olympics does not appreciate the powers of secrecy and mystery, exposing their training sessions to the hoards of fangirls which fill the stadium. But there are other underground organizations which parade around like variety shows but actually function as the chamber of secrets. If you pay enough attention, you may have the luck of hearing them discuss their rescue operations in Parseltongue, less popularly known as Korean without subtitles.

These variety shows include Running Man – the name explains it all, Strong Heart – to share your sorrows and gain strength from other victims, 1Night 2Days — a demo for that unfortunate moment when someone does get kidnapped, Cool Kiz on the Block – every tear on this show was out of fear of the power of fangirls, Let’s Go Dream Team! – they forgot to put a comma after ‘dream’ since clearly their obstacle route turns idols into lifeless bodies waiting to be scavenged by vultures fangirls, and my favourite, Infinite Challenge – the profundity kills me.

On one level it is hilariously ironic that we take fangirls who act like three-year-olds seriously. But then again three-year-olds can be demonic creatures especially when they believe what is theirs is theirs, what is someone else’s is theirs, what is the world’s is theirs, that sparkly being singing and dancing is theirs, D.O’s underwear is theirs, Infinite’s clothes are theirs, idols’ glittery poop is theirs. The only time they are mature and adult ladies is when they give phials of their menstrual blood to their beloved ‘oppas.’ These kids are undoubtedly attention seekers but don’t think that avoiding them will bear any positive result. Kids only cry aggressively louder when ignored. 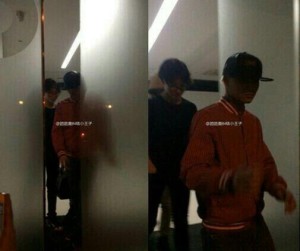 I say ‘kids’ not because I want to insult them – okay, maybe I do – but because they are actually underage offenders. While we may want them locked up in tiny iron cells expecting them to think over their crimes; realistically speaking, that’s futile because only two things can result from this – either they’ll resume their activities with renewed vigour or even worse, they’ll be fearful. Fear will turn them into recluses and instead of inflicting the pain on idols, they’ll choose closer victims; people they can harm and get away with.

Proper counseling and better socialization can be a solution to the problem at hand. While proper counseling is a self-evident medical term, socialization maybe a tricky cure. Socialization is not only the teachings of trustworthy adults like parents and teachers – problematic institutions, since clearly they haven’t been dealing with the perpetrators in a fruitful fashion, that is if they have dealt with them at all – but it is also their interaction with their peers which includes their diehard sasaeng comrades, and us.

While we seethe with rightful indignation when our idols are harassed time and again, while we may claim that we understand the workings of the sasaeng-dom, while we may pose as archetypes of responsible fans, we still have to admit that we have offered no concrete solution to the problem. And neither are we obliged to! However, what we are obliged to is at least help in trying to bring some of the sasaeng fans into normalized modes of fangirling. Sasaengs are in themselves a marginalized lot. They willfully do not identify themselves with mainstream fans because being the biggest loser is the privilege of only a select (asinine) few. On top of that, we ostracize them as they-who-shall-be-maimed, doubly marginalizing their identity while expecting them to walk through fire to prove that they are worth reconsideration. 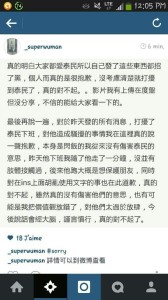 I am not justifying their actions. If anything, I am beyond frustrated with their persistence but it is unfair forget that they are not adults, and hence cannot be held to the same parameters of judgement. Even sasaeng fans span across a large range from the invasive photographers to the invasive pornographers, and while we are helpless when it comes to the extreme ends of extremists, I think the less violent ones can be dealt with peacefully within the fandoms. Maybe we can start by holding the several ‘angelic’ and ‘innocent’ fansite masters — who pay sasaengs to engage in invasions of privacy — responsible for their actions.

Or we can stop consuming sasaeng products. This sounds hypocritical coming from a person who dug deep into the internet just to get hold of the audio clip of Tao and Kris rapping in a bathroom and then spent a good amount of time shaming sasaeng fans, but I know I am not the only one. After all, the source of this information was a discussion thread among gazillion such similar discussion threads shaming sasaengs while at the same time, enjoying the audio. Not to mention private pictures. We see them, we secretly enjoy them and then we moralize. Now it is impossible to ignore pictures which float on the net but what is possible is our urge to share it. That is when we unknowingly become defaulters. If we can report or ban leaked music videos for the sake of our idols, I am sure we can report or ban sasaeng products for the sake of the person behind the idol.

After all this, it should be no surprise that I have developed a newfound respect for variety shows, just the way I had developed one for Lee Jonghyun after his television debut in A Gentleman’s Dignity (Jarvis, activate my jet). They work consistently in building warriors out of idols without a single blemish gracing the idols’ pretty faces. This is exemplified by the account of the original video uploader who accuses Taemin of indulging in “gay activities” which mainly include putting on makeup and earrings.

It’s not the crickets chirping; it’s your brain releasing acidic belches unable to digest all that logic.

Three things are revealed from this piece of information – one, no make-up face is as much a lie as YG’s new girl group debut; two, the whole idol industry is gay. I feel silly and betrayed for getting worked up over Tiffany and Nickhun. And three, makeup noonas are forces to be dreaded in the idol industry as they go Picasso with their BB cream. 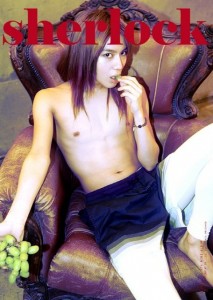 At the end of the day, we all know that if idols react to these assaults in any form or manner, especially in the absence of their managers, it is they who have to face bitter vitriol for cracking their image of perfection and infinite tolerance. And for that reason solely, we need these variety shows, we need Idol Olympics otherwise we face the risk of watching a horror movie version of the video titled “The BTS of the Sherlock Photoshoot.”

Calling it the “power of fangirl,” the offender pretty much hit the nail on what is the root cause of such invasions of privacy – it is the infinite power bestowed upon fans. Fans assume an entitlement of their idol’s body, soul and mind, and expect the idol to pander to their whims and fancies at all times. It is only when an idol is on a leash that these fans pedestalize them; any wrong move will be followed by a cautionary tug at the leash.

The fangirl has apologized saying “I never had the intention to harm Taemin” which literally translates to “lol jk.” It is important that these fans understand the gravity of their crimes. Reform can only come by if they have an understanding of the wrong done. I mean annihilation may look seductively attractive but every time you obliterate one, a new one crops up elsewhere.

In other news, it has been proved that Kai’s teleportation skills are real as he was nowhere to be found within the premise of the assault.