Listen to BTS Even for "Just One Day" 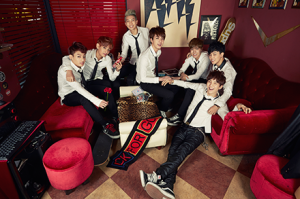 Almost two months ago, Bangtan Boys, aka BTS, made a comeback with their second mini album, Skool Luv Affair. In contrast to the hip-hip group’s previous releases, this album dived into the topic of teen love. The title track, “Boy in Luv,” did a great job expressing a teen boy’s typical frustrations, but the most traditionally romantic song of the album is undeniably “Just One Day,” released prior to the official unveiling of the album.

Unlike many idol groups who follow up musical promotions with a title track from a repackaged album, BTS refused to let hidden jewels from Skool Luv Affair go to waste before moving on to a new project. Therefore, they returned to the stage on April 9 to follow up “Boy in Luv” with “Just One Day.” The new MV was released on April 6, and showcases a side of BTS not previously seen in past title tracks.

As if to directly contrast “Boy in Luv,” “Just One Day” takes a mellow, R&B-styled route in confessing to a lover or crush. Interestingly, it still boasts the participation of members Rap Monster, Suga, and J-Hope in its production.

The lyrics also mention a busy schedule and how the whole fantasy of being with the girl is “a meaningless dream anyway,” implying the sad undertone of the song.

Maybe you resent me a little or no, a lot
I know, I couldn’t look
at you more because of my dream
Then just give me one day,
even if it’s in my dream, just one day

The difficulty of finding a happy ending perhaps describes the dating struggles faced by a public figure such as BTS themselves. Either way, the strong and confident sound in the group’s previous singles has slightly faded, leaving the boys more vulnerable and relatable.

As for the theme of the MV, it’s minimalistic but, on the most part, still intriguing. The sepia and beige-tinted lighting softens the frames and offers the surreal feeling that we’re inside BTS’s dream instead of a room-in-a-box set. Certain solo shots have shadows of what may be window bars or shutters, creating an effect of a sunrise or sunset. In the context of the song, the prior can be seen as coming to the conclusion of BTS’s dream while the latter symbolizes the end of the day they wanted to spend.

Although I’m unsure about their original intention, the shadows of the bars in Suga’s solo frames and crossed lines during Rap Monster’s rap remind me of a jail and a net, respectively. This adds on to the lyrics in constricting BTS in a world where they’re not free to do as they wish, especially in the area of love. 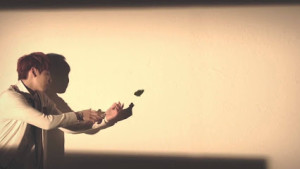 Other experiments with shadows include a clock to remind the boys of the time and a glimpse of the hypothetical day they would have. During the first chorus, a butterfly appears at the tip of Jungkook‘s fingers — but only in his shadow on the wall. Something that may take off beautifully in another world can’t do so where BTS is at currently.

The dance for the song is devoid of busy choreography and complex formations. Instead, the fluid movements match the mellowness of the melody. The relative stillness of the members in the background during solo segments create a confession-like atmosphere, especially during Jin‘s lines in the bridge when he holds the rose. This gives each member his own time in the spotlight to express exactly what he wants.

Even though “Just One Day” is a typical mid-tempo ballad, listeners and viewers of the MV can get a more sophisticated experience through the softer, mature choreography. However, the domino effect during the “do it, do it” segment of the chorus and the bright smiles the boys wear on their faces keep the performance cute and fresh.

Of course, you could argue that the MV is typical of K-pop in that there is no plot whatsoever. And unlike “Boy in Luv,” this MV doesn’t even have a female actress to play the part of the lover.

Yes, the lack of plot disappointed me at first too. But the extreme simplicity of “Just One Day” is actually quite refreshing amongst the countless semi-scripted stories we see in K-pop MVs today (of which include “Boy in Luv”). Instead of presenting a confusing plot that doesn’t do justice to the song, this MV complements “Just One Day” and allows us to focus more on the sound rather than particular depicted events. 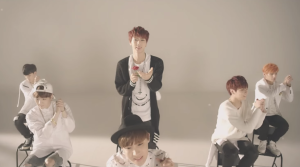 As a casual listener of BTS, my impression of the group has always been rap, rap, and more rap. This element was so overpowering in their past releases that I rarely found a chance to take a closer look at the vocals. Fortunately, “Just One Day” did exactly that.

Perhaps many audiences who are as unfamiliar with the BTS members as I am had trouble identifying the conventional non-vocalists — for example, the visual.

There’s no need to talk much about the rappers, whose skills have been widely acknowledged, but I couldn’t find anyone amongst the other members whose singing I didn’t enjoy. The latter section of the chorus even had lines in the higher note range — parts companies don’t usually give to the non-vocal members — yet everyone in BTS breezed through them. The member who I thought would be the visual, V, impressed in both singing and rapping. And the member who is the actual company-designated visual, Jin, even had an ad-lib during the bridge. Well done, Big Hit Entertainment (and BTS).

Similarly, the absence of a girl improves the MV as well. Without a specific face, or even body, to pinpoint as the intended listener of the song, the relationship between the person and the boy(s) is blurred. Considering the young age of the BTS members, perhaps they don’t have a certain special someone in their lives yet, and are merely singing to the future love they anticipate, somewhat apologizing in advance. In a way, the song can also be directed to their fans, voicing their regret for not being able to have one day together as friends — or lovers — instead of individuals who are on and offstage.

“Just One Day” is a nice follow-up to “Boys in Luv” in that it brings out a different color of BTS while still adding on to their potential. With a rating of 4.5 out of 5, I leave you readers with a live rendition of the song, performed long before the release of the MV.