Lee Jong-suk, "Star Disease," and the Burden of Public Expectations 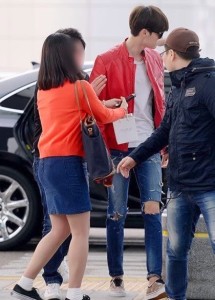 There were few up-and-coming actors that had a stronger year in 2013 than Lee Jong-suk. Coming off of the buzz of the KBS drama School 2013, his star power only grew with the huge success of SBS drama I Can Hear Your Voice.

With an ever-growing queue of acting gigs, Lee Jong-suk is enjoying a level of fame he likely couldn’t have expected when he transitioned from modeling to acting nearly ten years ago, and he often speaks with surprise at his continued success.

Lately, however, Lee Jong-suk has been the subject of criticism. A clip of an interaction between him and a fan at the airport has spurred accusations among netizens that Lee Jong-suk has developed “star disease” – a term used to describe an idol that becomes ungracious and arrogant due to the inflated perception of their own celebrity.

In this video, we see the fan approach Lee Jong-suk from the side as he exits his car with his manager. She tries to extend her arm to hand him a gift bag, but the manager stands between her and Lee Jong-suk, and blocks her from getting too close. At one moment, Lee Jong-suk’s hand appears to almost touch the fan’s arm, and he quickly draws it back as the manager pushes her back.

With the grainy quality and the rapid movements it’s difficult to determine what exactly happened, but it is hard to deny that Lee Jong-suk, either intentionally or unintentionally depending on your interpretation, ignored the female fan and her gift. Netizens were quick to believe the former, claiming Lee Jong-suk has a “star disease” attitude and has no respect for his fans.

Since there was only one fan present at the airport, it only looks worse for him since it required very little burden to at least accept her gift and then continue walking. Lee Jong-suk seems to avoid making much eye contact with the fan, even though she was visible to everyone else.

Moreover, as an idol Lee Jong-suk should be well acquainted with the long history of netizen criticism of ambiguous idol behavior that was perceived as rude. We can flashback to Suzy’s speech at the MBC Drama Awards earlier this year to see one such example. 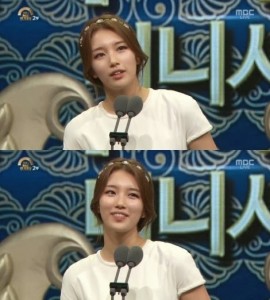 While Suzy’s awkwardness onstage and strange list of thank-you’s for her award could have been chalked up to mere nervousness, it became a controversy and many believed that she was unprofessional and rude in front of her fellow actors.

It’s interesting that in the aftermath of the Suzy incident, netizens cited Yoona at the KBS Drama Awards as the foil to Suzy and an example of ideal idol behavior. The same trend has occurred with Lee Jong-suk’s controversy, as netizens are now comparing his fan interactions to those of his peer Kim Woo-bin.

These comparisons come off as unfair. It’s unlikely that either Yoona or Kim Woo-bin has acknowledged every fan they’ve seen, smiled all of the time, or appeared cheerful in every photograph.

The inclusion of the two in the controversies is simply a byproduct of public expectations and a subtle threat that mass fan support can be fleeting if the star does not meet the standard.

In the idol world, the Suzy and Lee Jong-suk incidents cannot be written off as simply having a bad day or being tired or feeling shy. An idol in public has to be “on” at nearly every moment: receptive to fans, appearing gracious and polite, always offering a smile.

But sometimes it really isn’t their fault. Moving through airports especially can be a high-stress activity for idols and their managers: the idols have to consciously present themselves to their fans while the managers have to make sure that no one gets too close to the idol. And when fans are out in large numbers, that job becomes overwhelming and safety is a huge issue. 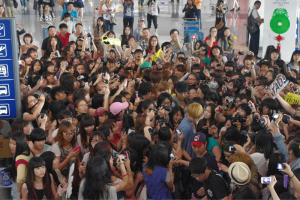 Airports are one of the few environments where fans can interact with idols with few limitations on how close they can get. Unlike fan-meets, which have clear parameters on where and how long the fan and the idol can interact, airports are a realm of near-free space for photos, videos, and incredibly close contact.

Granted, this single fan seems to impose no threat to Lee Jong-suk’s safety, but the manager remains slightly aggressive in pushing her off. Could Lee Jong-suk have interpreted the exchange as a reason to move away so the manager could handle the fan? Maybe, maybe not.

At this point, there isn’t much that can be done as far as interpretation goes. Netizens have already made their ruling, and Lee Jong-suk apologized in response:

I did not see the fan but felt someone pulling my arm and definitely thought it’d be my manager so I pulled my arm back. I did not think it would be a fan. I could not manage my facial expression because there were a lot of journalists in front of me. She seems like a fan I saw for the first time and I’m so, so sorry. It’s all my fault. I’ll do better next time.

Post-apology, netizens have noticed that Lee Jong-suk has been overly friendly with fans in subsequent interactions to compensate for his mistake. It’s a strategic move on his part, but he does not have much of a choice. He is an idol and must always put himself in a position to sustain the favor of the public. It’s how he maintains his reputation and how he continues to enjoy success in his career. 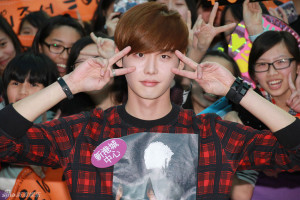 It’s unlikely that Lee Jong-suk will suffer any long-term setbacks because of the incident, but it is only another example of how little control idols have over how they are perceived by others. Small actions such as the retraction of an arm can easily be misconstrued as an affront, just as Suzy’s awkwardness onstage was seen as arrogance. It’s all a matter of netizen interpretation.

Whether Lee Jong-suk was guilty of ignoring the fan or not, the interaction was certainly blown out of proportion. It’s difficult to determine the characteristics of a person based on one isolated incident. Yet, he would never be in the position to deny the allegations against him for fear of only adding to the “star disease” image. Instead, Lee Jong-suk is forced to temporarily accept it and then contradict it through future actions, as many idols have done before him.

So readers, do you think the netizen backlash is justified? And, how do you feel about the public expectations of idols? Are we perhaps asking too much of them?