K-pop Concepts That Will Not Die 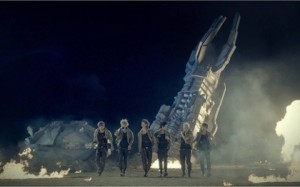 Sometimes, they can be specific – “We are aliens from another planet who have arrived on Earth.” Other times, they can be vague – “We will show you a mature and classy concept this comeback.”  Either way, concepts are the lifeblood of the majority of idol groups’ promotions. More often than not, the title track being promoted has some central, overarching concept that extends to styling, MV story lines, and even album packaging. But, whether or not they form a coherent whole is another matter of execution.

The Hallyu wave is responsible for introducing to mass audiences the idea of “concepts”; it’s allowing for it to slip into our consciousness. However, despite the wave’s rapid expansion, and its continuous proliferation of all things K-pop, the concepts we see appear to be variations of the same few themes: from high school and zombies, to aliens and the gothic/supernatural. Admittedly, these aforementioned “concepts” read like a collection of the most popular fan fiction tropes. What is the draw of these themes, and what is it that keeps K-pop producers coming back time and again?

These concepts work precisely because they’re easily identifiable. If one is going to be the next boy band to take on the ‘school boy’ concept, one does not need to worry about the concept and execution getting lost in translation, which is an eventuality that highbrow, out-of-the-box concepts risk. Of course, the success of executing the concept then relies on how far the company is going to carry it through – beyond just cramming the members into school uniforms and filming the MV in a school set, are there any other parts of the promotion that will tie in with it? Sometimes, the so-called concept ends up being of peripheral thematic importance to the overall comeback package, and instead ends up as a convenient visual identifier for the audience. 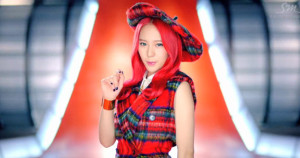 It would be unfair to characterise all groups who take on popular concepts as unoriginal. Even within a trope, there are the good, the bad and the ugly – sometimes a combination of all three – and occasionally, a group could even manage a refreshing take on an overused concept.

Oh, high school. From H.O.T to Super Junior to BTS, the high school concept has practically been a rite of passage for idol groups. Even if it does not appear in an MV, it usually makes its appearance in photo shoots, CFs and the occasional school uniform endorsement. The everlasting popularity of this concept can probably be attributed to the majority demographic of which K-pop is aimed at — teenagers — as well as its visual simplicity and appeal. Kudos if the company goes the whole hog and extends it to album design, such as EXO‘s “XOXO” album, which was crafted to resemble a yearbook. The group’s accompanying pop-up store was also designed around the school theme. 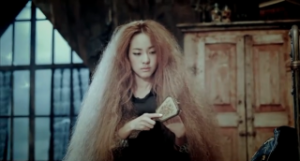 The gothic, the uncanny, the simply strange… K-pop has toyed with variations of this concept as a rather effective tool for storytelling in MVs, and for incorporating some interesting choreography into dances. This is exemplified in VIXX‘s rendition of “Voodoo Doll.” B.A.P’s all-blonde, alien debut concept, coupled with an aggressive hip-hop title track, made them one of the more prominent and successful rookies of 2012. Obviously no one can forget EXO, for whom SM Entertainment took the extra step of creating a mythology for, featuring an impressive, vaguely Morgan Freeman-like narrator at the beginning of “MAMA”, along with some nifty superpowers (which came with personalised accessories!). All of the abovementioned have had their strong and weak points, but a personal favourite has got to be 2NE1’s “It Hurts” MV, released in time for Halloween that year. It plays with the elements of the gothic in a manner that is almost Burtonesque in styling, colouring and setting. The result is an MV that stands out quite well among 2NE1’s fiercer, electro-heavy tracks.

Retro in K-pop often manifests in three time periods: the 50s, such as Secret’s Shy Boy; the 60s, which had the Wonder Girls evoking the stylistics of The Supremes in “Nobody”, and SNSD carrying out “acts of espionage” in their Bond-esque “Hoot”; and the 70s, where T-ara brought back the era of disco with polka dots and bell bottom pants. While it appears as though retro concepts appear to be more the domain of girl groups than boy groups, a retro concept taken on by the GD & TOP duo for “Don’t Go Home” is worth mentioning. Despite the MV never being officially released (and the dubious YG rip-off of the Warner Brothers logo), the self-awareness in the artificiality of the retro set in which G-Dragon tries to win the girl with T.O.P’s help, complements the song well and acts as a wink to the audience who are part of the “GD & TOP Show”. 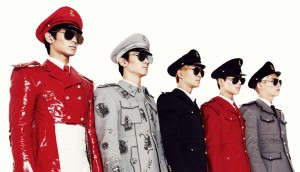 There is an inherent fascination with military fashion that is both like and unlike people’s enamourments with high school uniforms. While both emphasise uniformity, the high school uniform indicates to the viewer a sense of innocence and playfulness; meanwhile, the military uniform normally signals a more “mature” concept that reflects confidence and self-assurance. Shinee brought uniform chic back with 2013’s “Everybody”, incorporating highly stylised dress uniforms into their performances. Although the popular image of female military concepts might be those similar to SNSD’s “Tell Me Your Wish” or the Brown Eyed Girls’ “Sixth Sense” MV, groups like GP Basic have also shown their own interpretations of the military concept by going less “sexy military” to “just military”.

Even when groups do not go the whole hog with military uniforms, it isn’t uncommon to find hints of military inspiration in other comeback outfits — for instance, with Big Bang’s live performance outfits for “Fantastic Baby”. It’s also worth mentioning that veteran singer Im Jae-bum was embroiled in controversy back in 2011 for donning a Nazi uniform during his concert, despite his explanations that it was meant to be ironic. Hopefully, this kind of faux pas will not occur among the idol sphere, where hardly ill-intentioned but misguided appropriations are rather common.

Also, one should not neglect groups that have shown lesser reliance on concepts, or even groups that have found success with kookier concepts — Crayon Pop and Orange Caramel come to mind. As for the former, it tends to be a trait of the more established and veteran groups in the industry, who have either outgrown the need for gimmicky concepts or who have concentrated more on establishing a brand based on the group, not whichever concept it comes to be defined by. To cite an example, after establishing their brand and dominance with a string of uniformed/role-playing concepts, SNSD’s releases have reflected attempts to accommodate the need for change and evolution in their image as an increasingly veteran group. 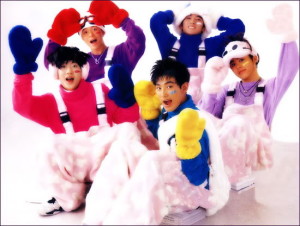 Does it get occasionally tiresome to see the same revolving-door of concepts parade around in the outfits of different boy and girl groups? Definitely. But the repetitive, identifiable tropes we see in the majority of comeback concepts is also what makes up part of K-pop’s appeal — it’s familiar, it’s comforting, and it’s easy to like, and there’s always the off-chance that some group might be able to deliver a fresh take on a tired concept.

If anything, there are no true “revolutions” in K-pop when it comes to themes and stylings. Think, instead of a linear progression, a cyclical one where later generations take elements of their seniors’ concepts and remake them in step with the trends and fashions of the day. In doing so, new-generation groups often incorporate the best of the crop into their comebacks, while leaving behind the obsolete or unfashionable. Year on year, we may be treated to renditions of H.O.T’s “Candy” by rookie groups that have been given the opportunity, but we may as well live in the comfort that we can relive the original without the furry oversized overalls of yesteryear.