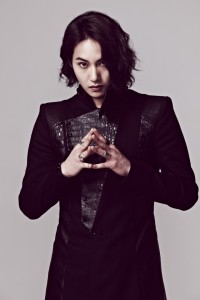 The power of a label is easily recognizable when a K-pop group enters the cut throat race for quick recognition without much pomp and show, but still manages to gain undivided international attention simply because of a name loaded with authority: Jackie Chan.

There was a strong chance that the label would have overshadowed and undermined the talents of the members but with Jackie Chan gradually being pushed to the periphery because of the boys’ commendable debut, it is safe to say that this band has the potential to stand on its own feet and make its own image.

Comprised of four Korean members – SimBa, E.Co, Eddy, San-Cheong – and a Chinese-Australian member, Prince Mak who was absent from the video due to an illness, JJCC (pronounced Double JC), the name acting as both Chan’s monograph and as the double acronym of “joining cultures,” made an impactful debut with “At First.” Relying on a K-pop staple – R&B pop – it gives it its own twist with a melancholic hip-hop beat, flawless harmonies, and a relaxed chorus. The highlight however, has to be the solid vocals and mid-tempo rhythmical raps.

While most debuts, in the bid to make a memorable song, end up creating a noisy hodgepodge jumping from one genre of music to another, JJCC plays it safe and smart by keeping the song and the music video neat and clean. They come off as powerful and skilled singers, their voices unique and distinct from each other, with the background music doing what it is traditionally supposed to do – only support the vocals. At the end of the song, their voices are the only thing resonating in listeners’ ears. And this is important for the MV barely manages to make a mark.

The MV, along with the song, essentially talks about the pangs of heartbreak with the lovers unable to let go of past feelings despite knowing that this hanging on is rather unhealthy and destructive. Images of destruction – projecting their emotional state – constructs the main structure of the video from the desolate and damaged buildings, to San-Cheong causing cracks in the wall, to SimBa vandalizing, and to E.Co’s fire imagery. The fire imagery is interesting because while the blue fire may look cool to touch, it is actually hotter than the standard fire, and is also used for healing. The change of the blue fire into yellow towards the end of the video indicates the ebbing of passion, from a fiery blue of preservation to a dimmed yellow of destruction, and also hints towards a resolution: from moping around in despair to moving on in life.

The lyrics also talk about the same issues except much less creatively comparing their lost love to a stale cake and an old game console. Avoiding stock romance language, the lyrics come off as rather immature, naïve and inexperienced. The recurrent mention of the “yellow sky” is the only metaphor done right foreshadowing the onset of a storm. The choreography is rather boring and unimpressive as well functioning more as a K-pop essential than adding to the concept of the MV. The MV and the (poor) lyrics help literalize abstract feelings of sorrow and pain.

But all of this can be overlooked for the smoothness of the vocals and the catchy chorus. Their live performances reinstate their identity more as skilled singers than dancers, capturing audience attention with their flawless singing which completely overshadows their stale choreography.

As discussed, Jackie Chan could have created a greater phenomenon considering his international acclaim and the talents of these boys but he stuck to standardized K-pop culture creating a good group, a good music video but nothing of the greatness the label “Jackie Chan” usually promises, deserving a 3/5.

Is “good enough” enough with all the resources they had ? Nope. Not at all.