Crayon Pop's "Uh-ee" MV is Fresh But Not Stunning 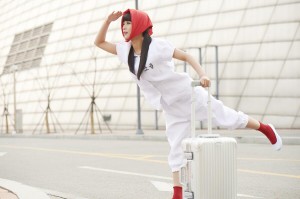 Crayon Pop are back with their fifth single album “Uh-ee” (also called “Uh-EE!” or “Hey”) and accompanying MV, which already has over one million views on YouTube. After achieving notoriety with “Bar Bar Bar” last year, this release builds upon their success while revealing a new concept for the group. They’ve ditched their iconic helmets for hanbok-inspired outfits and introduced a techno flair to this release, but they have the same goofy, lighthearted energy that makes them a pleasure to watch. Take a look:

The narrative is straightforward. Adorned in beautiful evening gowns, Crayon Pop enter a stuffy formal party where a star-studded cast of bored guests are awkwardly mingling. They suddenly jump out in front of the crowd in their new casual all-white outfits with white rubber shoes, red socks, and red bandanas. As the song begins, they sing and perform an eccentric coordinated dance, so that by the end of the MV the entire crowd is joyfully dancing along with the girl group, earlier monotony forgotten.

This is a simple MV, both in story concept and in the visual editing. It is disappointing that there are no changes in scene: the entire thing is Crayon Pop dancing at a formal party, with no cuts away to other narratives or settings. Many celebrities make an appearance in the video, including male group K-much (no surprise, they’re Chrome Entertainment labelmates in need of promotion), Bumkey, Kim Chang-ryul, and Yoon Sung-ho, but their presence only ups the star quotient of the MV, since they are mainly featured in the background with small cameos.

The extreme simplicity might be due to Chrome being a smaller company without the large resources to make a more expensive video. However, though earlier MVs like “Saturday Night” and “Bar Bar Bar” are similarly simplistic, they still featured more aspects than just one central dance scene and some interesting close-ups on the five individual girls interacting in different settings.  To be honest, apart from the glitzy opening scene of the girls entering the party (which sets up unfulfilled expectations for the rest of the MV), this has the feel of a Dance Version MV 2.0, not an original, striking MV. 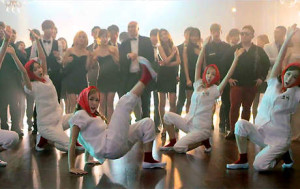 Luckily, Crayon Pop’s characteristic upbeat energy and quirky dance moves save the MV from being boring. Once again, the dance they perform is fresh and weird in a good way, and their angles are utterly in sync. The fast-paced techno-inspired beat of the song fits with their energetically robotic arm movements, and their enthused yells of joy in the chorus fit in well with the silly easygoing lyrics:

Their over-the-top facial expressions fit the lyrics, showing that they refreshingly don’t take themselves too seriously. The semi-breakdancing moves and what I’m going to call the “elbow dance” are visually interesting and executed with style and precision. Soyul visually pops when she’s in the center, and I’m glad that Ellin gets a chance to show some of her fiery personality in close-ups, but in general there are not many nods to each member’s individual personality.

I do like the storyline personally. Even though it is simple, it’s very characteristic of the “fun and funky” brand that Crayon Pop are currently known for. Rather than pitting Crayon Pop against a gaggle of humorless partygoers, instead the group convinces everyone to loosen up and dance along, and by the end they are co-conspirators in wacky antics. As they’ve said, Crayon Pop’s mission is to inspire people to have fun, and “Uh-ee” is definitely a fun song to listen to with a lot of dance craze potential.