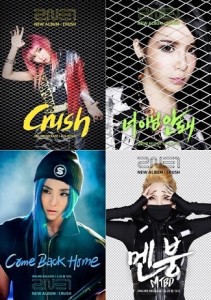 Fandoms unite and vote through consumption! Release dates are important for any musical act.  Timing is especially key to an artist’s publicity. Depending on when they release their material, seasonal trends or a heavy concentration in the market may determine the success or not-so-successful achievement of their promotions. Even more tantalizing is if two rival acts release material in close proximity to one another.

Oftentimes, their respective companies will utilize this timing to hype these two acts in a perceived competition against one another. Internationally, this has been proven to be a successful PR tactic with musical rivals having dueling albums released within the same week.

One of the major release date rivalries, occurred internationally on the J-pop scene between two of Japan’s most popular female artists, Utada Hikaru and Ayumi Hamasaki. Both established artists at the time, their companies coincidentally announced releases on the same week. Utada Hikaru was releasing her second album Distance and Ayumi Hamasaki was releasing her compilation A Best.

While some of the public decried this media play by the respective companies, the competition hype between the two skyrocketed their albums to sell staggering amounts on the first week of release. Utada Hikaru’s Distance was able to sell over 3 million copies during the first week of release becoming the highest first week sale of any album in the world’s history. Ayumi Hamasaki’s A Best was not far behind selling close to 2.9 million in week one.

In K-pop and its massive devoted fandoms, this tactic has proven to provide an avenue for healthy competition and promotional strategy. During the older days of K-pop before rivalries made between Big Bang and SS501, there was H.O.T. and Sechs Kies.

More recently revisited and dramatized in the popular drama Reply 1997, the rivalry was notable because of how intense both fandoms were. Even though H.O.T. were the senior group, Sechs Kies quickly rising popularity became a point of contention for the H.O.T. fandom. This came to a head when they both released full length albums in the middle of 1998. Sech Kies was promoting “Roadfighter” in September during the time H.O.T. promoted “Hope” from their album Resurrection. Both groups were able to capitalize on their warring fandoms to much commercial success.

Aside from utilizing release dates to commercially benefit, what other benefits does this tactic bring? Some argue that competition breeds quality. There is a need to outshine your closest competitor especially if it is within a short, shared period of time. That is subjective and up to warring fans to decide. Another intriguing benefit can be to raise the public profile of rookie groups.

Two rookie groups MBLAQ and BEAST came out with their debut releases on the same date, October 14, 2009. At that time, K-pop saw an inundation of new rookies debuting, so this coincidence increased the public profile of both groups. At that time, it was almost inevitable for new listeners to compare the two groups. Even members of the groups later noted their debut rivalry. Although MBLAQ had the higher selling single during their debut, BEAST was able to take that competitive hype and amass greater success with later releases.

Recently, two of K-pop’s top girl groups Girls’ Generation and 2NE1 have been gaining media attention for their close releases. A mish mash of changing release dates, the groups find themselves positioned to ‘compete’ during the same week. This release can be important for both groups, as naysayers here and there have been claiming that both groups are past the peak of their popularity.

Although Girls’ Generation are the top selling K-pop girl group act physically, their last release I Got a Boy sold significantly less than the prior album The Boys. For 2NE1, their last album To Anyone was released four years ago and since then, their releases have not seen the same resounding success as their earlier singles. Some argue that this release is pivotal for 2NE1’s career while others are more doubtful.

Any way you look at it, there is certainly going to be more fan fervor as these two girls groups duel it out on weekly programs and the charts. Release dates have been historically important in the music scene. Because most rivalries may only amount to sales or how many wins a group has, an actualized chart battle during the same period can become a hotly contested media frenzy. So, which release date rivalries did you find compelling to follow? Do you think it was a smart media play by 2NE1 and Girls’ Generation’s companies?