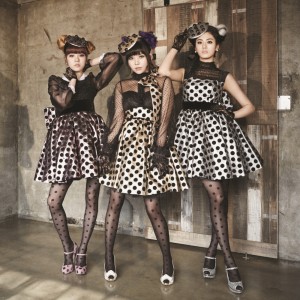 Instead of relying on your typical aegyo, Orange Caramel’s particular brand of cute keeps viewers guessing. Their concepts and songs are always original, which is something K-pop consumers claim to want from groups. However, due to their originality, they barely feel like K-pop at all.

This has been said time and again, but Orange Caramel really does fall more into the realm of J-pop and Kyrary Pamyu Pamyu. Shockingly, the trio hasn’t had much success with the Japanese market, but you won’t catch me complaining if that means the playful and adorable ladies of Orange Caramel spend more time on their Korean releases.

“Catallena,” the group’s third single, is a song that grows on you. On the first listen it isn’t quite as catchy as some of the group’s other singles, but the more increased airplay brings out its the disco-funk beat. Even if the song isn’t to your taste, you can’t deny how imaginative it is. Although using a disco beat in K-pop isn’t new, combining it with samples from a Punjabi song certainly is. The lyrics Orange Caramel uses are extracted from the song “Jutti Meri Jandiye” and it is a refreshing change from the usual English language sampling we see in K-pop.

As for the plot, “Catallena” is about a chic and haughty girl that everyone wants to be with, despite her temperamental personality. You could also say that it is a song about a girl-crush because the doting lyrics are specifically from Orange Caramel’s point of view. They sing, “Even as a girl, I can see she’s so attractive.” The character of Catallena is played by male comedian Kim Dae-Sung — the fact that he isn’t exactly beautiful adds to the idea that this girl isn’t desirable for the usual reasons but rather for her status. 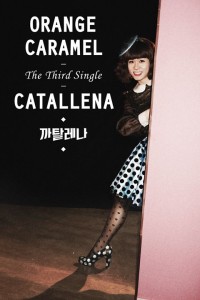 This plot could’ve easily been played by normal actors and actresses, but instead of a regular cast, the group has utilised sushi. And this is exactly the type of thing we should expect from them! Just like their MV for “Lipstick,” this video takes a typical story and uses a unique setting to make it stand out. Raina plays mackerel, Nana plays salmon, and Lizzy plays shrimp, while their Catallena is represented by gourmet octopus sushi. The octopus isn’t necessarily beautiful, but her price tag — and the prestige of being a rarer catch — makes her more desirable. The girls of Orange Caramel blush with envy and admiration.

The MV also shows other common sushi choices represented as people. Each sushi has a reasoning for being represented by that type of person – for instance, a chubby guy for the sweet and unhealthy egg sushi for example – and these cast members help the MV feel more dynamic although they aren’t as vital to the story. These different types of people also go into the sushi restaurant and eat their preferred choices, but never once is the sushi made of the Orange Caramel fish chosen. Mackerel, salmon, and shrimp seem to be considered cheap, common sushi – nothing like the beloved Catallena. 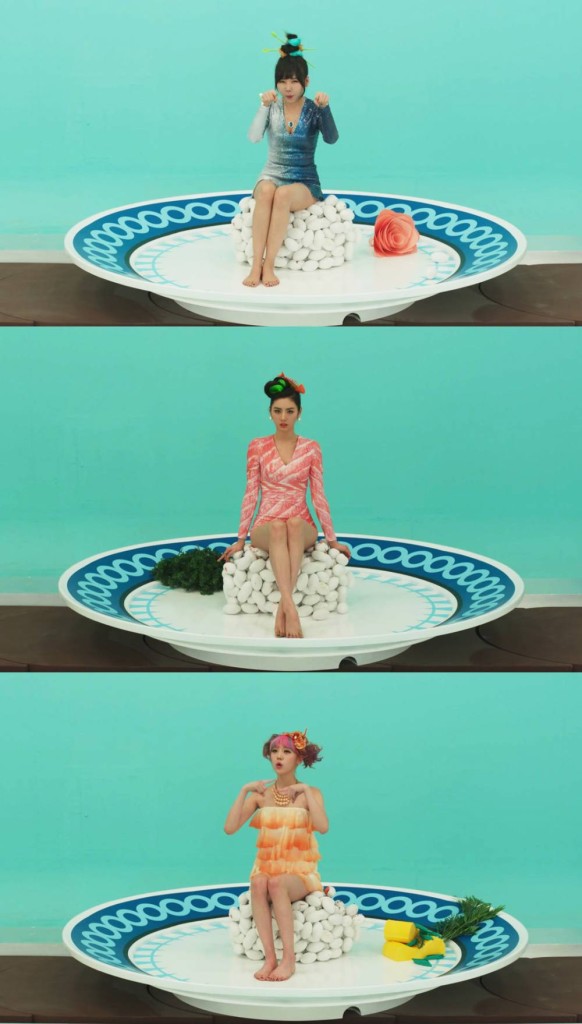 Everything finally changes when Raina, Nana, and Lizzy walk into the sushi restaurant. They are no longer representing the fish but rather playing themselves. Despite being rejected by everyone else, the mackerel, salmon, and shrimp are chosen by the girls of Orange Caramel and suddenly those simple little pieces of fish look a hundred times more appealing. As far as sexy eating goes, the shots of their sushi consumption are top-notch.

The message seems to be that no matter who you are there is someone out there who appreciates you. You don’t have to be a chic Catallena to get attention, the right person for you will come along. In terms of sushi, even the most beautiful pop star may prefer the simplest cut of fish over more exotic choices. Although the song itself is about having a crush on the girl with the highest status, the MV shows the lives of the girls enamored with Catallena and how they are eventually seen as the most desirable, which adds an extra layer to the storytelling.

The end of the MV, however, takes a slightly unexpected turn. After they consume the sushi, the girls have a flashback to the life of the fish they’ve just eaten — they shed tears over its fate. If this was supposed to be an environmental awareness message about over-fishing in the sushi industry or a vegetarianism plug, it was slightly misplaced. Not that pop music hasn’t been used as a vessel for larger societal messages in the past, but the serious moment felt displaced in the otherwise humorous MV and had nothing to do with the Catallena plot. 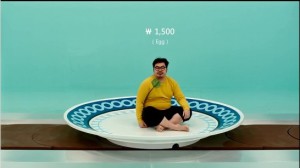 Along with having a well-executed story, the MV also shines in terms of styling, both for costumes and sets. The outfits are a perfect mash-up of stylish, cute, and over-the-top. Although the polka-dot themed outfits throughout the MV are good, it is the sushi-themed outfits that really stand out. The costumers for Orange Caramel are always innovative, but their ability to make fish-inspired outfits and headpieces that are not only distinctive but also adorable, is just downright impressive. As for the overall ambiance of the MV, the usage of a sushi board as the main dance floor, the sushi rice props, and the soy sauce baths were all perfectly in tune with the overall concept.

When Orange Caramel does a concept they never do it half-heartedly. The plot of “Catallena” is understandable and the theme stays consistent throughout the MV. As is usually the case, the group has managed to turn a common concept – in this case, people favoring a chic girl – into something engaging and unique. We may not have considered telling an entire story through the eyes of sushi, but Orange Caramel’s production team did and they pulled it off perfectly. Overall rating: 4.5/5

What’s your take on “Catallena?”