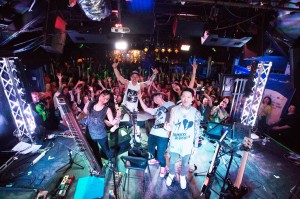 Welcome to another edition of Indie Gem! In honor of the Korean indie fest that was SXSW’s K-pop Night Out, we’ll be talking about Jambinai, who performed there last Tuesday. A three-member group that blends traditional Korean instruments with post-rock, Jambinai is a truly unique band in any sphere.

I want to say upfront that I highly encourage you to give this band a listen. It’s very rare to find music that is truly different, fresh, and interesting, but Jambinai somehow manages to produce a sound that is wholly unexpected.

The three members are: Lee Il-woo, who plays guitar and piri (a bamboo oboe), among other instruments; Kim Bomi, who plays the haegeum (string instrument similar to a fiddle) and others; and Shim Eun-yong, who plays the geomungo (stringed instrument of the zither variety). If that doesn’t sound awesome, I don’t know what does.

Although they began as a band in 2009, the members had met while they were attending Korea National University of Arts. After graduating, they found each other again and decided to make music together. The idea was to combine their traditional music training and rock sensibilities, in order to communicate with a modern audience. In doing so, they’ve changed expectations of what both Korean traditional instruments and post-rock as a genre sound like.

Jambinai is a band that breaks the mold in every aspect of their concept. Even their name — “Jambinai” — is distinct because it doesn’t mean anything. It is simply a combination of sounds that the listener can interpret any way they choose. The members may introduce themselves as “post-rock,” but they then go on to say they want to create “Jambinai music,” giving their songs a genre-crossing sound. Appropriately, they won last year the Korean Music Awards’ “Best Crossover Album of the Year,” for their 2012 album Différance.

Since it is difficult to talk about this band’s music without giving you a listen, let’s get to it. Here is the leading track off Différance, “Time of Extinction”:

What first strikes me is how masterfully they pull a variety of sounds out of their instruments. Particularly Bomi plays her haegeum in a way that brings the sound to the brink of out-of-control, before reining it in and extracting those long, dissonant notes. Eun-yong plays the geomungo like a bass, keeping the rhythm while simultaneously experimenting with the patterns. The climax of the song happens when Il-woo brings in the piri, with a hard, almost abrasive sound, though this was foreshadowed earlier with interjections of chaotic clashes in between the more hypnotic, driving parts. These different sound qualities are also emphasized in the MV, as it focuses on each musician’s performance and their embodied expression of the music.

Another great track off Différance is “Connection,” illustrating the range of expression in Jambinai’s music.

While not as hard in sound as “Time of Extinction,” “Connection” illustrates how well the group builds and layers throughout their composition. The track starts off with ambient sounds and a beautiful, mournful piri, but before you know it, Eun-yong and Bomi have subtly entered. Just when you think you’ve got the song figured out, the instruments take you in a different direction. The transitions are seamless, the flow builds in its own time, and the music fills up the space. Despite being nearly ten minutes long on the album, and 13 minutes long in this performance, “Connection” is never boring — the song is energetic and exciting, in a soft way.

One last recommendation from Différance is “Grace Kelly,” a song that brings back their harder sound.

Again showing a great sense for composition and variation, “Grace Kelly” is a short, fun tune that is haunting and head-bang worthy. This time, they incorporate indistinguishable vocals, highlighting the voice as an instrument that adds another layer of sound. Another nice feature of Jambinai, overall, is that each song feels just right in length; neither too short nor too long. The different sections in “Grace Kelly” last the right amount of time before becoming repetitive or unpleasantly noisy, allowing for bold experiments to live within the same song.

To date, the band has one self-titled EP and one full-length album (Différance), but they are going to put out another full-length album this year. If their current progress is any indication, the new album will surely be something exciting and worth listening to. Jambinai has already created an innovative sound that is a true fusion of musical styles, and stayed committed to their vision and hard sound. These are not feats to be taken lightly within music. This author, for one, is very impressed.

Jambinai’s done a ton of interviews recently because of their SXSW shows. If anyone’s seen them live, let us know!