K-pop and the Middle East: The Foray 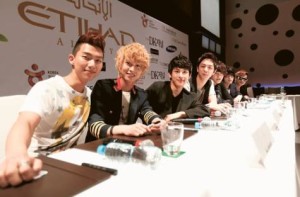 When ZE:A announced that they were traveling to the United Arab Emirates for a fan sign — my immediate thought was “Who’s gonna turn up?”

Thousands did. The sheer volume of fans that turned up (not only from the UAE but all over the Middle East) was explosive. We have seen a steady increase of K-pop lovers in the US, Europe, Australia, South America and even Russia. The evidence seems to suggest that the Middle East is next.

To some people’s surprise, K-pop and the Middle East are not strangers. A tangible example of relations between the two is the KBS World Radio Arabic, A radio show hosted by two fluent Arabic speakers Farah and Ameerah who invite famous K-pop groups and artists on to their show and spend thirty minutes or so engaging with Arabic speaking fans all around the world. So far, memorable names have been SHINee, Super Junior, TVXQ, BAP, ZE:A, EXO, f(x), Girls Day, Crayon Pop and others.

This is exciting for two reasons: 1) It is an official channel for Arabic speaking K-pop fans to interact with their idols, 2) They give idols exposure to their Middle Eastern fanbase. The latter is usually far more entertaining, as the way groups handle the exchange is hilarious.

Take for this instance: an Egyptian female fan was invited on to the show to meet Super Junior, and just how taken aback they were by her appearance was quite comical. Nevertheless, it was heart warming to see that Super Junior seemed genuinely curious about her. They found that the fan was older than all the members present, at which point Sungmin decided to road test his killer aegyo and call her “Noonaaaa!” — much to the fans’ pleasure. It must have been a surprise for them to know that they have fans in the Middle East, and the way they handled it was professional yet endearing. 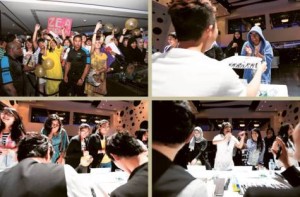 ZE:A handled their fame in the UAE in a similar manner. In an interview with Gulf News, the members exclaimed that they “were pleasantly surprised at the reception” and “promised to come back for a full concert.” ZE:A’s Heechul mischievously added that he “wants to meets lots of beautiful Arab girls” — which obviously went down well on the night. Infinite recently held a concert in Dubai for their “One Great Step” tour and it seems that this is a trend that will not die down soon. 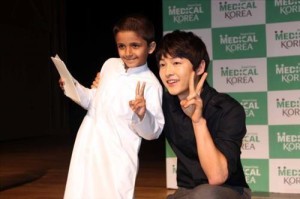 It’s not just K-pop that seems to be in demand, Korean movies and dramas seem to be gathering momentum too. “A Werewolf Boy” was screened in Doha, Qatar in the spring of 2013 and the event was sponsored by the Ministry of Health and Welfare of Korea and organized by the Korean Embassy in Qatar. Korea’s resident “Nice Guy” Song Joong-ki was invited to attend and he participated in a mini fansign. The response was huge, to the extent that people had to be turned away at the door. The night went smoothly, and promises to organize more events were exchanged.

In spite of the above, the use of the K-pop brand goes beyond conventional means. More interestingly, K-pop is being heralded as tool to initiate peace in the Middle East. With around 5000 reported fans in Israel and 3000 in the Palestinian territories, K-pop has taken off amongst the conflict between the two states. Though it may seem naive to think that pretty flower boys and killer aegyo can solve the current conflict — The Calcalist says that it gives people hope… in a place where it is rare. 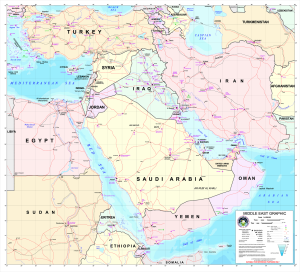 Continuing with this theme, Korean-Middle Eastern relationships have boomed since South Korea became one of the world’s leading economies. Though the basis of the relationship has been mainly energy focused (with South Korea being a major importer of energy) Mona Sukkarieh of The Korean Herald believes despite oil and gas imports the Middle East stands to be a vast market that has still not been sufficiently explored. This gives way to a bigger space for many industries within Korea to expand in to the Middle East, Korean entertainment, being amongst them. This is all good news for the K-pop industry, as it orchestrates an extension in to a seemingly unknown market; Saudia Arabia reports to have seen a rise in the consumption of Korean dramas (which were mainly wolfed down by Egyptian and Iranian fans prior to this.) 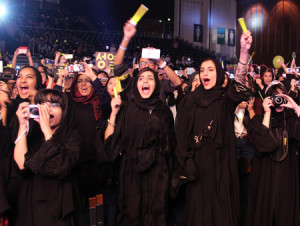 The evidence above suggests that the development of a sound infrastructure that enables more and more K-pop acts to visit, perform and interact with fans in this area of the world has increased. It is noteworthy that the Korean Embassy is helping in the spread of K-pop in the Middle East. They are a strong supporter of the cause, and one of the few organizations that has the manpower and existing networks to see anything like this through. This coupled with the entrepreneurial zeal of fans who organise events and persuade sponsors, makes for a power couple that could deliver on the event/concert front. After all, the interest is K-pop is present all over the Middle East, now all we need is the opportunities for artists to come over.

We can bear witness to the rise of Korea strengthening their muscles in the air lanes of Middle Eastern countries. This naturally ushers us towards a more relevant question: is it about time that Middle Eastern media outlets take the initiative to produce broadcast programs that cater to this growing fanbase? Sociologist Al-Modaf of the Saudi Gazette agrees that an innovative way of using the media, may be the fastest way to export the “Asian Wave” to the Middle East. The outcome, will be advantageous to both the Middle East and the Korean entertainment industry.

We can hope that if the pace of interactions quickens, in the near future we will be seeing more of K-pop in the Middle East.