BtoB's on the Highway with "Beep Beep"

Less than half a year after dropping their last mini album, BtoB‘s back again with Beep Beep. We bid goodbye to the dark vampire concept they portrayed in “Thriller,” which many fans and listeners are perhaps grateful for. Instead, BtoB’s offering us a song somewhat reminiscent of their 2012 hit, “Wow.” The MV for “Beep Beep” was revealed on February 16, and the view count easily surpassed 1 million in 10 days. Meanwhile, the mini album has topped the Hanteo charts for the past week, proving that BtoB’s pretty close to hitting the jackpot this time.

Just like “Wow,” “Beep Beep” is filled with mixed drums and horns galore. Produced by Brave Brothers and Elephant Kingdom, the song boasts a balanced mix of hip-hop, pop, and a hint of R&B. Even after just one listen (or probably just half), it wouldn’t be too hard to sing along to the latter section of the chorus. Despite their consistent use of long rap sequences in title songs (there are two whole verse-long sections in “Beep Beep”), BtoB’s vocals are undeniably above par too. Overall, “Beep Beep” is a fun song that fits BtoB perfectly.

The only factor that prevents me from loving it as much as “Wow” (at leastfor now) is the slower tempo that doesn’t thrill as easily as the latter song’s faster beat. “Beep Beep” is still a high-spirited and unique piece that’s easy to sing and dance along to, but BtoB has yet to release another hit that can match the wow level of “Wow.”

As for the MV of “Beep Beep,” it’s a quirky mix of fun and confidence. BtoB’s performance makes me love the song more, but it can’t exactly be classified as a top-class MV. 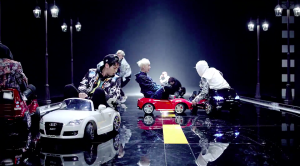 Let us first take a moment to applaud the rare, appropriate use of cars in a K-pop MV. Plenty of artists have done it before, from SHINee  in “Lucifer” to Gary in “Shower Later.” But this time, BtoB’s actually singing about driving, honking, and even getting stuck in traffic. Viewers definitely won’t get bored of the many neon cars scattered throughout the MV. My favorites are the baby Audis and Land Rovers.

The stylists made sure to pop bright colors into BtoB’s clothes while the set designers refused to hold back in their use of bright lights. The atmosphere never lacked energy, but it was missing some plot. The MV never even hints at the background story behind the relationship described in the song. BtoB’s had a few scenes of flashbacks in their past MVs, but that idea’s been abandoned for “Beep Beep.” Although I did enjoy the flow of the MV now, I wouldn’t have minded one or two lovey-dovey scenes with a female actress, especially if they had been shot in an outside setting. The overall feel of “Beep Beep” differs from BtoB’s previous releases, but there’s still that slight hint of claustrophobia due to the closed sets. 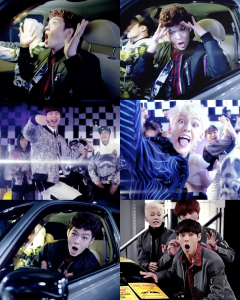 Surely, though, the seven boys of BtoB enjoyed filming this MV. BtoB’s known to be a derpy (in a good way!) group, and they don’t hold back in any of the scenes in “Beep Beep.” But does that really match what the song’s trying to convey? If you give the lyrics a read before hearing the song or watching the MV, perhaps you’d first imagine a soft ballad. A line in the chorus claims that “tears come at the thought of you” while the rap explains how “honestly, I feel like crap right now.” I definitely don’t see any tears or crappy-feeling boys in the video.

Of course, the MV can only take part of the blame. The song itself is upbeat and happy-sounding, so I doubt anyone would choose it as their first-choice heartbreak song in the first place. 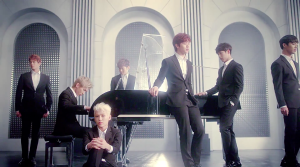 The only section of the song where there’s a hint of sadness is the bridge, where the set consists of neutral colors and the boys are looking serious in suits without smiles on their faces. Both the set and the lighting in the this section give it a dream-like feel. It contrasts drastically with the rest of the scenes, making me doubt its unfitting existence in the MV at first. However, the slower tempo and the faded colors play together to possibly imply a sign of weakness in BtoB’s hearts. The girl they love has left, and they haven’t had much trouble over the breakup. Yet, there are brief moments when they think back to their past and drown (or maybe just swim) in their sadness. 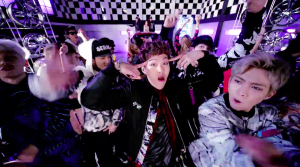 Until they decide that’s not too fun and go into full-out party mode instead for the rest of the song. The last third of the MV, which is also the most memorable for me, features the members competing for the best derp face (Changsub takes the cake for this one), leading a crowd in their wheel/window-wiping dance, and also playing around in cars that look to be about the appropriate size for toddlers. None of it makes much sense, especially in correlation with the song lyrics, but it’s a delight to rewatch.

Just like most K-pop MVs, “Beep Beep” doesn’t have much plot, and the fancy sets and clothes are there too to heighten the visual appeal. But BtoB separates their MV from all the other party-depicting MVs through their abandonment of their handsome images and skilled showcasing of their inner characters ( derping). “Beep Beep” has an MV that would most likely be entertaining for even YouTube browsers who have no knowledge whatsoever of BtoB. It’s probably safe to say that it would be among my top picks to show a friend who’s a foreigner to K-pop. And, of course, it teaches a valuable lesson too: the best cure to a broken heart is a baby Audi.