Side B: VIXX, the Dark Princes with Soft Hearts 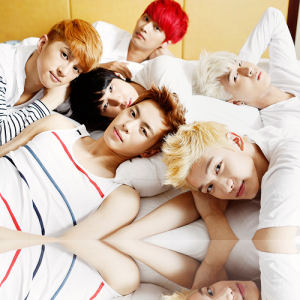 Despite being known as the kings of darkness in the current scene K-pop, VIXX have a soft, romantic, and fun side as well that shows through in their b-sides. Although their first two singles were certainly more cheerful in tone, VIXX’s shift to the dark side with “On and On” was what really got them recognition. There are plenty of groups that are cute or sweet so it makes more sense, marketing wise, to go with their more unique path. It is also a valuable trait in a group to be able to swing between sensually scary and sweetly emotional. Their company is making the right choice in continuing with goth concepts for singles — as that is what is selling — but it is a blessing that they have continue with the more upbeat b-sides as well.

Ravi, in particular, seems to have a penchant for writing songs about love, romance, and dating. That doesn’t mean the theme doesn’t suit the other members, though; far from it, in fact. The sweeter melodies are actually more fitting for the tone of Ken and Leo’s voices in some ways – especially Leo with his high tenor. The light songs also require less vocal acrobatics at times, allowing more room for the slightly less experienced vocalists – Hyuk and Hongbin – to contribute more. As for N, he’s just a romantic at heart. Member’s personalities aside, let’s talk about what really matters — the music!

When the Jekyll repackage was released, the song that really caught my attention was “Say Love.” The single, “G.R.8.U,” is a great song as well, but I found myself listening to “Say Love” over and over again. Maybe it is the repeat of the word “ottokaji,” or maybe it’s the way Ravi raps the word “joah” in his rap, but whatever it is there is certainly something addictive about this song. The synth backtrack is upbeat and has sound effects that can only be described as sparkly and fantastical. Overall it’s just a fun song with a fun beat and fun lyrics; exactly what a feel-good song should be.

From the same repackage, the song “You’re Mine” stands out. Featuring Girl’s Day’s Minah, this song has a slightly more R&B feel to it than “Say Love.” The chorus is particularly addictive, with Ken and Leo’s voices both matching the high notes perfectly. The repeated refrain of “hello hello” is impossible not to sing along with, and Ravi’s use of the word “shorty” is endearing – if a bit corny. This would be a good song even without Minah’s parts, but it is her feminine voice that adds depth to the track and makes it stand out from the others.

When VIXX announced the release of a full album “Voodoo” what it really meant was twice the opportunities for glorious love songs! The first romantic track on the album to really stand out is “Someday.” This is a slower love song, almost reaching ballad status, but the tone is slightly too upbeat for that category. I’m not sure what it is about the use of “la, la, la, la” that works so well in pop music, but this song is no exception. The background noise of oo’s and ah’s fits the feel of this track perfectly. Between the soft melody and Leo’s sugary sweet voice singing the repeated word “sipeo” it is hard not to fall in love with this song.

On a slightly more fun note, we have the song “Say U Say Me.” Starting out acapella, this song quickly picks up a cheerful electronic sounding beat and fittingly begins with Ravi’s ever romantic English. Speaking of Ravi, his rap section in this song is certainly one of the most enticing parts. His playful style really suites this type of song. Once again, we also have a repeated word – in this case “yeah” – that gives the listener something to grab on to that gets stuck in your head. This is just a feel-good song about first love that doesn’t need to be anything else; it makes your heart flutter just the way it is.

“Love Come True” is an interesting track because of its unexpected musical turns. It starts out with a dramatic ballad tone with romantic piano and emotional vocals. However, the background melody shifts suddenly to upbeat, almost danceable. Somehow, VIXX manages to maintain their emotional vocals while singing fast-paced. The tempo switches back and forth between faster, and slower with a heavier base, a few times keeping the listener on their toes. Also, there are a number of very impressive belted high notes in this song indicating that it would be a good one to see performed live to gauge the singer’s capabilities. This song speaks to the group’s ability to tackle complex tracks that are challenging in both tone and tempo while maintaining their refreshingly cheerful attitude in love songs.

Finally, I’d like to give a nod to the b-side on VIXX’s debut release, “Starlight.” This song is a shout-out to the fans of the group – not anything new in K-pop – and it is the fun attitude and lyrics that truly make it stand out. It isn’t the most serious or polished track in their repertoire, but it has a raw sweetness that is more appealing than highly polished love songs. It’s a song where the random use of English is endearing and the rapping manages to be cute. Overall, it is a song that embodies the positive attitude VIXX has had since debut.

Despite being a group that has made their name by tackling dark and twisted concepts, it is their sweet and romantic side that carries them forward in terms of b-sides. Much like their personalities off stage, the group’s love songs capture a playful optimism that is too often passed over in other groups in favor of sexy or depressing concepts related to love. I’m happy to have VIXX continue with their goth image as long as it continues to get them recognition, but as a listener I cherish their b-sides when I want to feel the simpler emotions of joy and love.