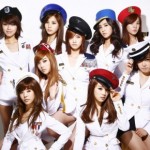 At long last, the girls are back. It’s been a while since Girls’ Generation‘s last official Korean comeback and fans have been waiting patiently — or not — for them to return. SM Entertainment finally released official dates for the comeback today along with a video teaser for the upcoming MV. The single “Mr. Mr.” will be released on February 19th and the full album will be released on the 24th.

The song sounds a little different than their past singles, but it is also difficult to tell from a teaser as any good K-pop fan knows. It also looks like there is a less cheerful concept in the MV this time around. Is a medical room with neon pink instruments — Girls’ Generation’s version of edgy and dark? Maybe so, or maybe not, but regardless it doesn’t look like their typical love story MV. Only time — and more teasers — will tell!

Are you looking forward to this comeback, Seoulmates?