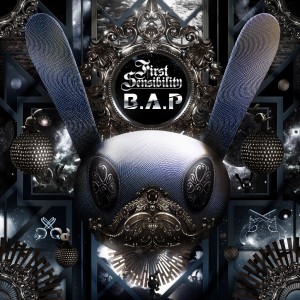 B.A.P. has released a full length album, at long last. First Sensibility is the culmination of the members’ hard work over the period of time while they toured and didn’t promote much in Korea. As a group, they have always been honest about their desire to try many different genres of music and this album is a representation of that desire. The songs range from R&B, to ballads, to dance tracks, to retro hip hop, and all of the members contribute a great deal to the vocals – one of the best changes the group has made since debut. With the more even line distribution and the multitudes of genres, the album gives all six members a chance to shine.

The intro, “B.A.P,”  is suitably “swag” and gruff sounding. It gets the listener in the mood for the style B.A.P. is associated with. There are lots of appropriate English lines like “B.A.P. is back!” which let you know that this is not only an intro track but also that the group is as lively as ever. However, the it doesn’t exactly mesh into the first official track smoothly. While I thoroughly enjoyed the intro and it really got me pumped up it also made the soft start of “1004 (Angel)” that much more off-putting. 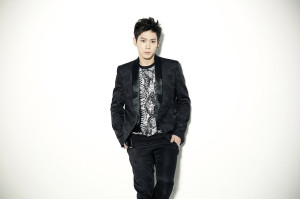 Despite the brief surprise of the song’s tempo, “1004 (Angel)” was the natural choice for the single. It is one of the catchiest tracks on the album and it shows a new side of B.A.P. musically. It is also one of the best put together and best produced tracks on the album. It is dramatic enough to be emotional, but fast enough to allow the rapping to slide right into the mix. It has a passionate flair so fans of the more intense B.A.P. will be pleased, but it also keeps in touch with the group’s emotional and mature side which we have seen more and more of as they have developed.

The albums tempo gets even slower as it moves on to the third track, “쉽죠.” The song starts off with a typical Yongguk rap — deep and soothing — then moves on to Zelo sing-talking in his high voice. This song is particularly good for Yongguk, though, as the tempo and R&B feel work perfectly with his voice and rap style. The song is similar to their track “Coffee Shop” in its jazzy beat and smooth tone, so if you like that song you will probably enjoy this one as well. It isn’t overly interesting, but it is a well put-together track that fits their style.

The tempo suddenly speeds up when “Spy” comes on with its showy horns and funky beats. It is an odd song made up of a lot of components that make it sound similar to 1990s hip hop. That vibe especially comes from the background electronically mixed beat-boxing noises. It isn’t surprising to hear B.A.P. taking a swing at this retro hip hop style and they pull it off well enough. However, did we really need another song called “Spy” in the K-pop world? I guess it’s better than another song called “Something.”

“Check On” slows things down a little, but it is still on the funky side. It’s another track that sounds slightly retro in its beat formation. The twinkling background sounds give it that 1970’s vibe, like a sexy disco song. Zelo actually raps legitimately in this track, as opposed to rap-singing, and it is nice to get a taste of that talent he is famous for. The song is basically a self-praise track, nothing new for hip hop, and the rapping takes the forefront. The tone doesn’t ever really pick up during the song, though, which makes it a little boring towards the end. 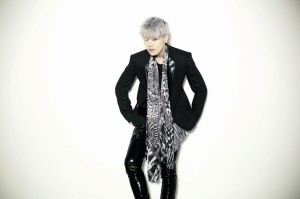 The next track takes the sexy vibe to another level entirely. “Shady Lady” treats us to plenty of Zelo and all of the other members getting in touch with their higher registers. The term shady lady may not be the most flattering in the US, but apparently B.A.P. think it is a perfectly fine compliment. This song is most similar to “쉽죠” in tone, both having that slow R&B vibe and deep Yongguk rapping. The song itself has a nice flow that makes it pleasant to listen to and gets you swaying from side to side with the beat.

“Lovesick” picks up the pace and goes back to a more traditional boy band sound. The maknae line really takes the cake with their sweet singing in the beginning, a nice change from their usual roles. This is a positively catchy song. Starting from the pace change at Zelo’s part, the melody keeps a fast beat going throughout that is a perfect contrast to the slightly melancholy vocals. The song finishes sweetly with stereotypical, but appropriate, English phrases that convey the songs message.

On an entirely different note, “Bang X2” is alternative rock in nature. It has a rowdy and loud chorus involving lots of loud drumming and heavy guitar riffs. It isn’t like anything we’ve heard from B.A.P. before, but it isn’t a bad song by any means. It does feel a little out of place on B.A.P.’s album, though. I am the last person to ever criticize B.A.P. trying out new genres – in fact I loved when they went cute – but “Bang X2” doesn’t sit well on the album. Daehyun’s impressive range kills the melody during the chorus, and there are some other catchy moments, but overall not the easiest listen on the album. It’s simply the type of song that feels like the group should be playing the instruments and rocking out on stage, swinging guitars, and B.A.P. is not that kind of group.

“S.N.S” is by far the corniest song on this album, but it is also irresistible due to its down-low, dirty beats and sexy-smooth vocals. But honestly, “hey girl tweet me your mention?” is truly a lyric that is a sign of the changing times. Once upon a time people asked for girls phone numbers, but no more! There is also a healthy amount of other English thrown in, such as “sexy” and “special.” Despite the lyrics being a little ridiculous, the song itself is hard not to listen to over and over. The rapping grooves along with the sexy back track and matches the tempo of the singing so as not to stand out jarringly. The song grabs you from the beginning and keeps you dancing the entire time.

On a more serious note, “Body & Soul” takes a more traditional approach to romance. The rain drop sounds in the background and the emotional high-notes are quintessential boy band ballad elements. Youngjae’s voice is perfect for the gentle melody and Daehyun provides the more powerful flourishes that pull at the heart strings. The whole song sounds like it could be from boy bands from the mid-2000s and that isn’t a bad thing. Once again, the vocal parts are divided up well, but there isn’t much rapping for a change. This and “With You” are really the most “ballad” like tracks on the album. 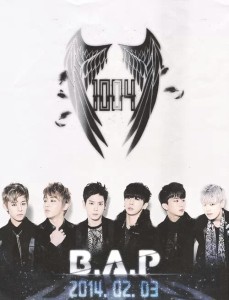 “Save Me” goes back to a feeling similar to “1004” and their past single “Badman.” It is angsty in tone and has a serious rap by Yongguk, but the chorus ends up being light in comparison. Although the verses have a dark back track and an intense tone the chorus has a more hopeful note with a higher, more electronic back track. The two sections almost sound like they came from two different songs. It is difficult to say whether or not they should have just split it into separate tracks, but the serious lyrics during the chorus are enough to make the song work as it is without being too strange.

The chanting signals the ever present song dedicated to fans. “B.A.B.Y” is like so many other boy groups’ songs, but special in its own way. There is an abundance of musical elements in this song that make it stand out as a perfect emotional pop track. It is also very well suited to B.A.P.’s style because the tempo allows for cute, powerful, and sweet singing as well as fast-paced rapping. The chorus takes unexpected turns as Daehyun’s voice swoops and soars, and the background melodies lend the song depth. My only complaint is that Yongguk’s rap feels incredibly out of place. The album suffers from this issue more than once, but it seems they just felt like a rap section needed to be stuck in.

To finish the album off, “With You” is deliciously melancholy in its melody. Himchan and Jongup shine in this song, but Himchan makes an appearance in the second verse that is surprisingly beautiful. The chorus of soft, echoing “with you” is appealing to the ear and lends the song a romantic feeling. The song isn’t overly complex, but it the ringing background music and soft rapping make it into a suitably interesting and lovely ballad. It ends the album on a calm note, which after all of variation is a blessing.

Although trying new things is important, the amount of experimentation with genre that B.A.P. did in this album ended up being a little off-putting. The constant shift in tone and tempo between songs and within songs didn’t always make for easy listening, and while music should stay interesting it should also appeal to the listener. There were songs that on first listen did not make me want to give them a second chance, but luckily as a reviewer I am required to listen to the album multiple times and in the end I gained an appreciation for even the most experimental track on First Sensibility. Even if you don’t immediately enjoy this album, I suggest giving it more chances as it truly is worth experiencing to its fullest. Overall rating: 3.5/5