We’re less than a week into the new year, and we’ve already been hit with a new wave of comebacks by high-profile idols. Interestingly enough, the latest releases by TVXQ and Rain have us once again discussing the issue of the representation of foreigners in K-pop.

Gabrielle mentioned in her piece on TVXQ’s “Something” that K-pop music videos have a tendency to create a fetish-centric atmosphere rather than a multicultural one when foreigners are used as extras. And it’s a huge problem, whether white people are visualized as the unattainable ideal and the voiceless beauty or black people are used as body props to satisfy stereotypes or perform roles too “dignified” for Korean extras.

Rain only perpetuates this issue in “LA Song.” Tumblr user BlackInAsia often posts on issues of black representation in Korean media, and his thoughts on the video’s visuals are spot on in reference to the harmful portrayal of black women.

The most egregious example has spread across the internet: seen at 1:50, Rain stalks towards a black woman, forcefully grabs her, and simulates a kiss while covering their lips with his hand (because, of course, the likelihood of Rain actually kissing her is at absolute zero for obvious reasons). In the next cut, the shadow of her body transforms from its regular form to a version where her breasts and butt are enlarged.

It’s a blink-and-miss shot, completely unnecessary to the poor plot of the video, which is to show Rain as a man of power who is successful and attracts attention. The implications of the shot, however, are incredibly alarming, one that becomes more complete once context from 19th century world history is applied. 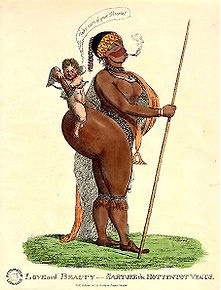 Compare the shot of the woman above to the woman to the right. The latter is a drawing of Saartjie “Sarah” Baartman, a South African slave that was taken by a British ship to London due to the men’s fascination with the shape of her body. After that, she would endure a life as an exhibit in London, in which people would pay money to see her. Baartman remained poor, abused, and discriminated against until her death from illness in 1815.

Even after her death, her remains, including her skeleton and genitals, were put on display in Paris until she was finally laid to rest in South Africa in 2002. The degree of dehumanization in this story has appalled most over the course of history, and the allusion to it in Rain’s video is beyond an unfortunate coincidence.

The suggestion in Rain’s video is that his kiss activates this hyperbolic sexuality of the woman. Combined with the predatory gaze he shoots her way prior to this makes this scene more than uncomfortable, one that BlackInAsia also notes as trying to:

exploit and debase black women’s bodies to be ‘edgy’ (since black female bodies are inherently ‘deviant’)…The black woman is assaulted and then has her body put on display for the camera with her exaggerated butt and breasts the centerpiece of the demeaning show.

The idea that Rain and his production team thought that this would be a cheeky source of bit humor for a music video only continues the tradition of ignorance to issues of race in Korean music and beyond. And it didn’t stop there.

Now we cut to the dance party scene of the video. At approximately 3:19, another black woman is seen in braids, with the white paint on her face is given a “tribal” image. She dances unlike the other extras in the video, and her image and motions does little other than to satify some desire to portray usual stereotypes about African tribes as a “savage” other. 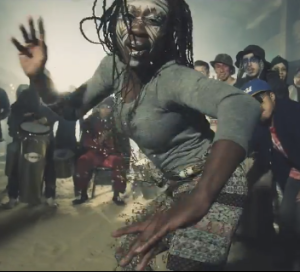 Seriously, is it asking too much of K-pop to show other races as equal in videos? Whether it’s the glorification of whiteness or the hypersexualization of blackness (both towards women, I might add), can you image a Korean woman taking these roles? I doubt it.

It’s because these roles generally don’t exist for them in K-pop videos. The portrayals, especially those of women, in K-pop are highly controlled, and when foreigners are included, their race is the primary determinant for which roles they’ll occupy.

Take Wa$$up’s “Nom Nom Nom” video. While this video only shows black men and is comparatively less problematic, note the imagery. The extras are wearing clothes and accessories associated with hip-hop culture; they gamble (albeit in a tongue-in-cheek way); and basically serve as props while the girls of Wa$$up do some mediocre jump-roping.

These monolithic ideas of what “white” is and what “black” is, as well as what Koreans are not, do nothing to promote diversity in K-pop. What good is diversity if all of the representations subscribe to stereotypes and do nothing to expand the perspective on cultures and peoples outside of Korea? This is the catch-22 of the race issue in K-pop.

Rain’s attempt to be a suave, masculine showstopper in “LA Song,” as he walks around with a lipstick mark on his face, only ends up being highly sexist and racist with its image of Rain as a predatory figure that forces himself upon women. And at this point, the allusion to Baartman goes without saying as an awful demonstration of ignorance, completely cosigning on pervading issues of the fetishization of black women. 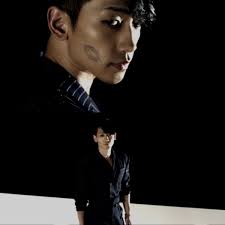 Gabrielle mentions that if K-pop wants to really make its movement to be more open sincere, they should let more people in. And yes, it can be a positive thing to see other races interacting with idols in Korean media.

However, if letting more people in results in harmful portrayals of foreigners like in “Something” and in “LA Song,” maybe they’re best not included at all.

It’s a discouraging conclusion, but when put in perspective it is certainly the more favorable one. Despite the constant kickback by international fans on incidents like these, there are rarely apologies and similar events follow, and the lack of dialogue in Korea about these issues only guarantees the continuation of these beyond-problematic portrayals.

One thing is certain: these incidents have given K-pop a poor start in 2014.