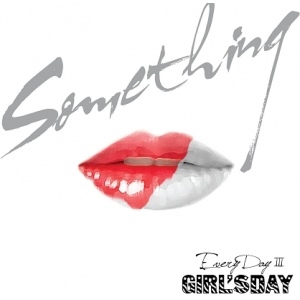 Girl’s Day is back with another sultry release! Following their hits “Expectation” and “Female President,” they’ve come back with a more mature tone with “Something.” While the previous two were more risqué than their past ventures, this comeback has taken a much more sensual approach. It also seems that the girls are sticking with the “sexier” side of the girl group spectrum conceptually as well as song wise.

The mini-album, Everyday 3,  is short and sweet, giving us their title track “Something,” as well as two other songs called “Whistle” and “Show You.” Of course, we are treated to a nice intro called “G.D.P” or “Girl’s Day Party.” The intro does a nice job of getting us excited for the girls, though it’s a bit jarring in comparison to the songs on the album as it takes on a more club beat compared to the rest.

Their title track takes is slow and steady, easing into a more upbeat chorus. The song isn’t as bold or dynamic as their previous hits, but it is a nice listen. Their voices do lend well to the breathy quality they’ve taken on for this track, and it makes the climax of the song a bit more dramatic in juxtaposition with the rest of the rather quiet vocals hear throughout.

Whistle (which is personally my favorite) is much more upbeat and seems to fall in pace with “Female President” as well as some of their tracks from their Expectation album. The vocals are stronger, and, while a bit on the cutesy side, is a nice pop track that fans will appreciate.

Ending Everyday 3 is another slow track called “Show You.” It’s a bit reminiscent of “I Don’t Mind,” and is a track where the girls show of their vocal ability. It’s not a very memorable track, and they have done better when it comes to ballads, but it does round out the album. It’s pleasant, but not noteworthy.

Since they’ve debuted, Girl’s Day has grown in leaps in bounds vocally and conceptually. While they have gone down the sexy route, they still manage to hold on to their cute charm seen in earlier days. Old fans that remember them from their “Twinkle Twinkle” days will be pleased with the few cutesy tracks now found used as B-Side tracks, and new fans will be happy with the sexy side of the girls that we’ve come to love, or, at the very least, expect from them. I wouldn’t say that this mini album is one of their bests, but it does enough to keep me interested in what’s to come. Therefore, I give this album a 3/5.