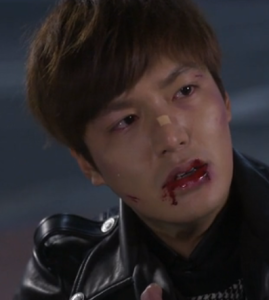 Episodes 17 and 18 have been my favorite episodes of Heirs so far; they’re what I originally wanted Heirs to be. These episodes were by no means perfect, but they somehow still managed to hit the right notes for me.

Kim Tan’s rebellion and self-destruction was painfully good to watch. To me, it was more than just his pain over losing Eun-sang. It was also his realization that he was trapped under his father’s will and had no control over his own life.

The scenes had just the right amount of angst but as much as I enjoyed them, I’m glad it didn’t last too long. I prefer Lee Min-ho with an easy smile on his face.

Kim Tan and Kim Won are becoming brothers again and I love this arc so much. The two have a lot in common and I just want them to team up against Evil Dad. Unfortunately, there’s only two episodes left so that might not happen, but just them being on good terms is enough for me.

Speaking of Evil Dad: can he just die already? I’m sick of his interfering and holier-than-thou attitude. Let’s be honest, it is his own fault everything is screwed up. How he blames Ki-ae (Kim Tan’s mother) for everything is ridiculous considering it takes two to tango, if you know what I mean. 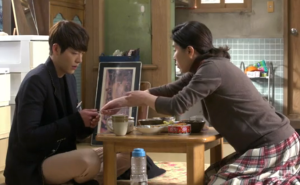 I absolutely loved Ki-ae’s decision to leave Dad because it showed so much personal growth. She has always been focused on climbing the social ladder so it speaks a lot for her character that she decides this is not the life she needs right now. I was very proud of her for standing up to the man she once loved knowing she was giving up so much.

Although this won’t happen, I would have loved if she had went and stayed with Eun-sang’s mom, Hee-nam. It could be another spin-off with her hilariously adjusting to regular life and botching things up. The two actresses have a great rapport that I’ve missed these past few episodes.

Fan favorite Young-do had some great scenes as well but the most heart-breaking of all was him eating with Hee-nam. In that scene you could see how much he missed his mother and how much eating a home-cooked meal with a mother-figure meant to him. 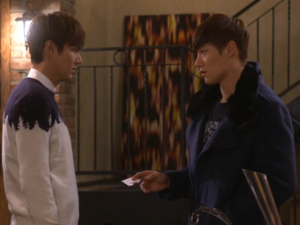 His character is even more tragic when you consider that now that he has given up on Eun-sang he has no one in his life — his father is abusive, he has no real friends, and his mother left him. All he wants is someone to truly love him. Heirs, can’t you give him something good for once?

I’ve always wondered if the reason he didn’t look for his mother was because he was afraid his father would find her. Perhaps he did try looking for his mother and couldn’t find her. There is so much to be explored here but I guess we’ll never know.

While these episodes weren’t perfect, they were pretty darn good. What made them so good was that the show finally put characters together whose dynamics we’ve been wanting to see paired up. Rachel and Hyo-shin semi-flirting — check. Kim Tan and Young-do repairing their friendship — check. Kim Won and Kim Tan working together — check. Let’s hope Heirs continues this in its final episodes next week.

How do you want Heirs to end?