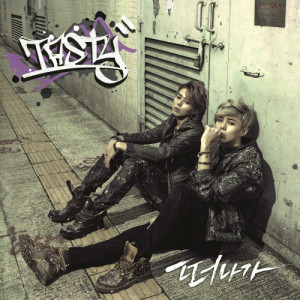 Tasty, made up of twins Daeryong and Soryong, isn’t taking a long break between releases as they did last time. Just over three months after resurfacing with a bang with single “Mamama” off the well-titled single album Spectacular, the duo has returned once again with “Day ‘n’ Night,” this time to give us a taste of nostalgia but through the eyes of another city.

Shot entirely in Hong Kong, “Day ‘n’ Night” takes full advantage of its setting. The sumptuous shots of the city make it a prime example of excellent use of overseas scenery and act as a reminder of the twins’ past, as the two have spoken of their time when they lived in China.

And the music video is not a mere overview of the city with random landmarks and sites sprinkled throughout dance scenes to make it look like the Hong Kong we see in travel magazines. Instead, we get the real Hong Kong, complete with sweeping views of the city, its harbor, rooftops and alleyways. We get to see the bustling streets, the nightlife, the people.

But worry not. In addition to the cinematic views, it also does have something of a plot.

The music video opens to Daeryong turning on lights in a small restaurant. He wipes a table and opens the door to find model and actress Esom waiting outside. She seems to have been up all night as she is wide awake and dressed in her finest clubwear whereas Daeryong is haggard and exhausted, apparently not fully awake.

Through a series of flashbacks, we see that she and Daeryong have been in an on-and-off relationship, and right now they are off. But it seems that she’s here to reconcile. She smiles and sits him down for a drink to try to charm him, but he remains unmoved and walks away. All the while, Soryong stands in the background watching.

Time passes, and Esom returns to the restaurant. This time it’s late at night, and she’s very obviously drunk. She makes a mess of knocking things over and passes out on a table. Daeryong covers her, obviously still in love with her. Another time jump, and they seem to be on again. Esom is helping them at the restaurant as Daeryong looks on smiling. 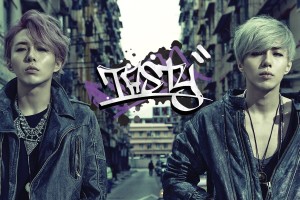 Cut to a montage sequence of the adventure of Esom and the twins. They eat durian, roam the city at night, and just have all kinds of fun together.

With Soryong always present, the inevitable love triangle makes an appearance, but Esom is the one who initiates it. One night at the restaurant, the two are alone in the back, and she backs him against a counter. He squeezes his eyes shut as she leans in close to kiss him, but she pulls away before making contact and grins.

After this we get more fun with our trio so it’s not totally clear if Soryong does actually like her. There doesn’t seem to be much tension between them except in one scene when they’re sitting by the harbor drinking. Esom nudges Soryong and gives him a look, which he ignores.

But that doesn’t matter at the end because we get a twist ending. The trio are walking down an alleyway when they come face to face with what appears to be gang members. Esom seems to have been dating one of the guys and had run off. Instead of staying by Daeryong’s side, she rejoins him as the other guys beat up the twins as the music video ends.

It’s a weird ending, not simply because it was unexpected but also because it’s random and doesn’t add to the story. Instead of clarifying the insinuated love triangle, they bring in this ending from left field and leave it at that. I suppose it’s better neither of the twins ends up with the girl than the alternative of them fighting over her, but the ending is still strange.

Nevertheless, the track itself is the best part. Stepping away from Rphabet, who produced Tasty’s previous singles, the duo turned to producer Heuktae for their blast-from-the-past sound. As the Heuktae is also the vocalist in a group named Retro Bomb, it’s appropriate that the track he produced for the twins would also be a throwback, specifically to the beginning of the K-pop era. Everything about this song screams ’90s. It could easily belong to Deux, Turbo or Fly to the Sky. The synth, the drum machine, the guitar riffs, and even the clean, auto-tune free vocal style are all ’90s-era pop staples.

Despite its upbeat nature though, the subject of the song is actually quite somber. It’s the story of a guy trying to forget the love he had for a girl after she hurt him. He says that he can’t live without her despite the pain that she put him through, but by the end of the song he says, “Don’t come to me now/I can endure and overcome.” The ending of the music video plays off this

Even the choreography and styling borrow from the ’90s, and it’s especially evident in the performance version. I couldn’t help but think of New Kids on the Block with “You Got It (The Right Stuff)” even though that song technically came out in the late ’80s, but the choreography still bears a striking resemblance. They have similar footwork and shoulder movements and even do the butterfly. It’s all haphazard, messy and fun, and in a completely intentional way. Much of ’90s choreography had a freestyle vibe so the looseness to Tasty’s dancing works perfectly in sync with that, and their ability to adapt to that style only adds to their already established reputation as skilled dancers. And with clothes these days getting tighter and tighter and sometimes even with less fabric, the twins go the opposite direction with their loose jumpsuits and gloves. Soryong even has a middle part a la Seo Taiji.

The only weakness I see with “Day ‘n’ Night” is the vocals. The duo’s emphasis has been performance since debut, and their lack of vocals in “You Know Me” had many criticizing them. With Spectacular though, they proved that they had more than sharp moves and pretty faces going for them. They tempered their electronic music to let their vocals shine through, and it worked. But now with “Day ‘n’ Night,” they’ve stripped their vocals down just a bit too much.

That isn’t to say that they sound terrible or anything of the sort. It’s obvious that they are well trained and know how to sing, evident in the a cappella portion at the end of the music video. But their voices just aren’t strong or unique enough to go with the simpler music of ’90s pop. The song falls a little flat because of it.

As a package though, “Day ‘n’ Night” suits Tasty because they are so focused on performance. They embrace the styling and choreography so that it doesn’t feel like an act or a costume. Combined with the gorgeous scenery of the music video, it really is a great track for them, making for a fun, befitting comeback for Tasty.