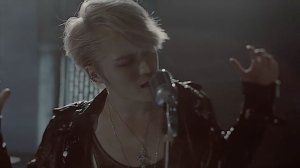 Despite my fondness for JYJ, I admit that I lingered in forming an attachment to Jaejoong. I knew he had a lovely voice and an attractive face, but I never understood his image. He didn’t seem to fit into the K-pop scene, and that threw me. While I followed most of his solo activities along with those of the other members, I warmed up to him more but still kept my distance.

Coupled with my hot-and-cold feelings toward JYJ’s music, my wary approach to Jaejoong’s first solo release early this year seemed reasonable. But it looked promising, especially with my history with rock music across a multitude of genres, sub-genres, languages, and cultures, and that enticed me. Fortunately, I was not at all disappointed with “Mine” and the rest of his debut EP I. It gave Jaejoong a solid image that actually seemed to fit him and made me jump fully on the JYJ bandwagon. As such, when news came of Jaejoong’s next album and single, I couldn’t help my excitement, and “Just Another Girl” solidifies my love for him.

While certainly not the first to borrow from the genre, “Mine” brought a new flavor to the K-pop scene with its heavier rock influence, and “Just Another Girl” continues Jaejoong’s spell with the genre. With a relatively softer rendition, the track is a delightful marriage of Jaejoong’s fondness for ballads and rock by giving us a — you guessed it — rock ballad about having your heart broken over and over and the resulting frustration.

The song opens with a simple guitar riff that evokes the emptiness left after romance is gone. Jaejoong comes in with his emotional vocals as the drums join in. This building continues into the chorus when the song swings fully into the rock genre. It softens with the second verse and right before the final climax without ever losing momentum. Despite the speed it maintains through the end, the track is nevertheless a melancholy story of a love at its end. Jaejoong cries “Take me out from having fallen into pain/Let me live as a true man so this won’t ever repeat.”

The music video translates this emotion with a fittingly angst-ridden story of love at its end. Jaejoong sits at a piano with a girl, but it appears that this is just a flashback as Jaejoong paces in an abandoned building of sorts. He is visibly upset by a series of memories that would be harmless, even sweet, if we didn’t know what this song meant. The same girl sits with him on a couch drinking coffee, and he leans close to her as if to kiss her. The scenes continue, and they’re lying on bed together, smiling. She’s buttoning his shirt up. She lies with her head in his lap on the couch. They sit in a bathtub together. Each is a vignette of what appeared to be a happy relationship, but as is evident in the lyrics, she was deceiving him. With the montage of other girls, it’s also clear that she’s not the first to do so either, hence the name of the song.

Despite the fact that this was in the past, he’s obviously still hurting. He returns to the apartment they once shared where everything is covered in plastic. He stands there, eyes closed, letting the emotions wash over him. In anger, he uncovers everything: the couch, the piano, bicycles, and a painting of them. This is his chance to face the deceit of their relationship. Cut to an outdoor scene: all of the belongings they once shared fall from the sky and explode around him in chaos, but he walks away unscathed. Overlapping this are shots of their painting burning, a metaphor of him finally letting go of the relationship and the pain it caused. 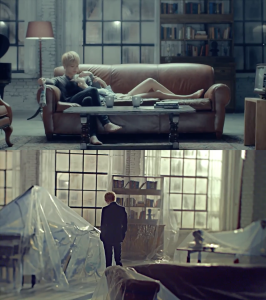 Unlike “Mine,” which was rife with symbolism, this music video is more straightforward. It has a pretty much self-contained plot that’s surprisingly easy to understand compared to many other K-pop music videos. With its simplicity, one might assume it would be bland or boring, but it isn’t. While it’s nothing particularly earth shattering, the cinematography is lovely.

The flashbacks are mostly warm and bright, the way the relationship likely felt before everything went down the drain. In contrast, the present is dark with a cooler tone, sometimes completely devoid of color. But at the end, the color returns with full force as the world crashes around Jaejoong against a brilliant aqua sky, and he moves on. Still, it remains on the cooler end of spectrum, showing the resulting coldness in his heart.

Alright, so maybe I’m reading a bit into it, but regardless the filming style fits the mood perfectly. Even the end, when Jaejoong stands in the darkness lit only by a red flare, we get that he’s angry, which matches the tone of the song. It seems that they were going for a more of a mood than anything else, and the cinematography is a great way to show that alongside the music. It also makes for a more emotional, easy to digest experience than slamming viewers with a lot of ambiguous, disconnected metaphors or confusing us with a convoluted plotline that the artist probably didn’t even fully understand. 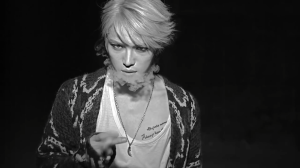 The styling, too, matches well. It follow more typical rock style, not so much the glamorized K-pop version. This has a more haphazard feel to it with lots of rips and leather and of course plenty of black. The only exception would be the suits Jaejoong wears in several of the scenes in the present (I’m particularly fond of the burgundy double-breasted suit), but I’ll let it slide.

Despite my apprehension with JYJ’s music, I do consider myself a fan because when they get it right, they hit it out of the park. And “Just Another Girl” is no exception. While the music video itself is nothing particularly novel, it is solid and tight, creating the perfect mood for a strong song. I hope to see Jaejoong continue with his foray into the rock genre as it definitely works well for him.