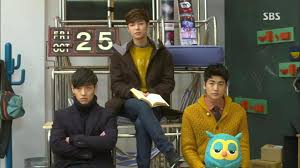 Here’s to wishing you and yours a Happy Thanksgiving with a few things to be thankful for in the K-popiverse: good music, good dramas, good fun, and good friends…

The following are the 5 Things that happened in K-pop last week that I think were a bit more special than the rest. If you are not up-to-date with your K-pop and don’t like spoilers–it’s time to step away from your laptop because spoilers in 5 Things is just as likely as a turkey overdose on Thanksgiving.

Hyuk-jin, Jong-hwan, Rok-hyun and  Chan-yong of seven member group 100% banded together for the group’s first subunit 100% V and released their debut song “Missing You” and its MV.  Never really paid much attention to 100% before, but “Missing You” is an awesome song.

4. When winning isn’t always a win

The Heirs hasn’t been the epic high school K-drama I was hoping for, but it has its moments. Half the time, I think Young-do doesn’t even really want to win.

In addition to the LA Dodgers’ Ryu Hyun-jin and miss A’s Suzy, Korean Baseball legends, LG Twins’ Lee Byung-kyu, Doosan Bears’ Kim Hyun-soo and Ryu’s former catcher and current coach with the Hanhwa Eagles Shin Kyung-hyun joined the Running Man cast for a little baseball, super powered baseball. Granted, it’s not as hilarious as it was the first time around, but it still was a lot of fun.  I’m just not sure if it was more fun for the audience or for the cast and crew of Running Man.

When did VIXX get so good? They were barely on my K-pop radar before and all of a sudden they’re everywhere.  “Voodoo Doll” is a solid new hit from the group with a disturbing MV that you just can’t take your eyes off–even though it’s gruesome at parts.  They released a clean version, but it’snot as good as the original.

It was a hard choice to pick just one of the many awesome performance from the 2013 MAMAs with the likes of Ylvis & Crayon Pop, 2NE1, Icona Pop & CL, Big Bang, Rain, Trouble Maker, Exo and Stevie Wonder turning in stellar sets. It was a toss up between the comeback from Rain–who maybe would’ve been here if not for wearing JYP’s clothes, the super rookies Exo, and… Big Bang. Seriously though, how can you compete with solo performances from all the Big Bang members, except Daesung (why?!), and an ending with their signature song of the last year.